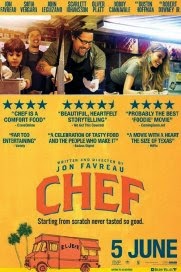 Jon Favreau goes from Iron Man to Iron Chef, writing, directing and starring in this comedy-drama. Favreau plays Carl Casper, the Miami-born head chef of a Los Angeles restaurant. Owner Riva (Hoffman) insists that Casper abide by the popular menu, but Casper argues that creatively, things have gone stale. An explosive incident involving food blogger Ramsey Michel (Platt) is the last straw. Casper leaves the restaurant behind as he accompanies his ex-wife Inez (Vergara) and son Percy (Anthony) back to Miami. There, he starts from scratch, getting a food truck up and running. Martin (Leguizamo), his friend and line cook from the restaurant, drops everything to come over to Miami to help. Soon, Casper, Percy and Martin are selling Cuban sandwiches out of the food truck, going back to basics, Casper re-evaluating his career and his relationships along the way.
Fulfilling the roles of writer, director and star, it might seem to some like Jon Favreau has made himself a tidy little vanity project. Chef is nothing of the sort. Watching Chef is like listening to a friend talk enthusiastically about his interest, this friend phrasing it so eloquently and enticingly that before you realise it, you’re all wrapped up in it. Favreau’s passion for food bubbles over and is extremely infectious. Then there’s the matter of just how lip-smackingly delicious everything – even the humble grilled cheese sandwich – looks. Every review has said this and mine is no different: don’t go into this hungry. I actually heard the audience at my screening crying out, almost in agony, at every lovingly-shot edible item. With acclaimed chef and food truck pioneer Roy Choi as consultant and overseer, Favreau does his own “stunts” in the film and is wholly convincing as a culinary wunderkind. It’s clear Favreau has done his due diligence, leading many professional chefs and food writers to sing the film’s praises.

Chef is more than just a Food Network cooking show. There’s an earnestness and sincerity served alongside a heaping helping of wit and humour. Many films that are billed as “feel-good movies” can feel manufactured and contrived, but Chef flows organically, its relationships and characters largely believable and relatable. The emotional beats are genuine and even though there are over-the-top moments, this reviewer was sufficiently convinced that those were required to set events in motion; most of the film an entertainingly laid-back affair. Just as Casper trains his young son in the ways of the kitchen, Percy guides his father through the world of social media. There’s a clever visual gag in which tweets are represented as floating holographic text bubbles which are then compressed and carried away by a little blue digital bird. Favreau’s most recent film as director before Chef, Cowboys & Aliens, was not very well received. However, Favreau wisely resists demonizing critics in this film and using Chef as an avenue to vent against those who didn’t like his earlier work; the character of Ramsey Michel not portrayed as a sneering villain.

Favreau is as adept in front of the camera slicing, dicing, sautéing, grilling et al as he is behind it. Chef Casper is utterly likeable but also flawed and most definitely human and prone to outbursts. Favreau’s Casper is a culinary force to be reckoned with, but not some kind of untouchable kitchen god the way the role could have been written and acted. He has a top-tier supporting cast as well, John Leguizamo especially fun as the faithful and capable sidekick/pal. Child actor Emjay Anthony is a revelation; his Percy isn’t your standard “smart-mouthed comedy mini-adult”, you buy that this is a real kid – in fact, he’s probably better-behaved than most real kids actually are. It’s fun and surprisingly not distracting to see Robert Downey, Jr. and Scarlett Johansson, both alumni of the Iron Man films, pop up. Sofia Vergara tones down her usual loud, fiery shtick and it winds up being a really nice performance from her. Oliver Platt and Dustin Hoffman as the food critic and the restraunter respectively are well cast, too. Look out for a pretty funny cameo from comedian Russell Peters. 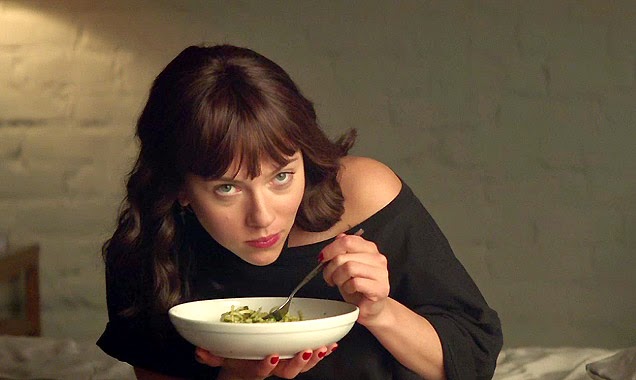 If there’s any relatively major gripe with Chef, it would be the R-rating. Now, I write for a magazine named F*** and I know foul language is a fact of life in real professional kitchens, but the swearing makes this unsuitable for younger moviegoers. It’s a shame because a large portion of the film is about a father-son relationship and involves a child actor. There’s also no violence or explicit sex, just mild sexual references. And kids should see this; it’s inspirational and empowering for anyone who has a passion about anything. Still, Chefis sweet, heartfelt and clearly prepared with love; Favreau on fine form as a true multi-hyphenate.

Summary: Can you smell what the Favs is cooking? Why, it’s quality, soulful cuisine! Bon Appétit!
RATING: 4 out of 5 Stars
Jedd Jong