David Mack was in Singapore for the Singapore Toy Games and Comics Convention and The Shortbox was able to sit down and chat with the artist/writer. This year, he celebrates the 20th anniversary of his creation Kabuki and will be doing the covers for the Fight Club sequel comic book series, written by Chuck Palahniuk with interior art by Cameron Stewart. Mack also discusses the stylish end credits sequence of Captain America: The Winter Soldier, for which he did the art.
What was your impression of Fight Club after first seeing the movie or reading the novel? 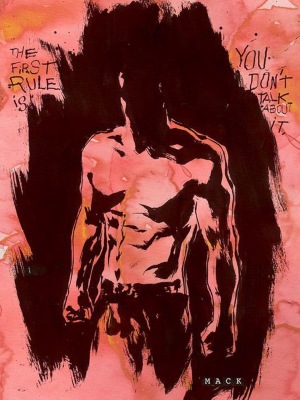 I saw it in 1999 on a Friday night, I went home and immediately did big drawings of it. I was so fascinated with that movie and there were actually a couple of lines in the film that were very similar to the lines I wrote in Kabuki. I remember turning to my girlfriend at the time going “I love how this guy writes, he writes like how I try to write.” I was so connected to the movie that the next day, Saturday, I went and saw it again, like two days in a row. Every time I saw it, I saw new things about it, I just really appreciated it, the metaphor of the movie. I saw it in the theatre twice and I’ve seen it a lot on DVD, I’ll just put it on while I’m working.
I was so connected to the movie, I was like “who is this guy?” I found out it was based on a book and I found all the other books that he’d done at that time, Invisible Monsters, and I was travelling through Europe, reading all his books on the train. I was really fascinated by the story so I wrote Chuck Palahniuk in the mail and told him I connected to his stuff and that I do some work too and he wrote back and told me to send him certain things that I did. At the time, 2006, there was a documentary film about my work called Alchemy of Artand I sent that to him also and he wrote back and he really liked it and he had this idea some day of getting together different creators from different mediums and doing some kind of, in his words, “tour bus” to sort of show people that they have their own responsibility to create their own culture.
I published that letter he wrote to me in the back of the Kabuki book. He sent his phone number in the letter and said “next time you’re in Portland, come meet up with me” and so every time I was in Portland, I would meet up with Chuck. I was usually staying at Brian Bendis’ house in Portland. Brian and I would stay up all night, go to sleep at like 7 in the morning, so Brian would wake up at noon and I would go “oh, I’m going to have lunch with Chuck Palahniuk, I’m coming back” and I would come back but he never would meet Chuck. He thought that maybe I was making it up, that Chuck was my Tyler Durden. But then I would have these lunches with Chuck that were so inspiring. He would come back and say “I’ve been writing all day long, in a trance, fugue state writing so much” and we’d talk about our ideas and the creative process.
Even early on, Chuck had a real curiousity about comic books and graphic novels and storytelling, he asked me lots of questions. Early on, the Daredevil: End of Days story had just come out in the last couple of years, 2006, 2007, Brian and I were writing it together. We had such great conversations and I invited him back to Brian’s house. He asked “what are you doing” and I said “I’m writing down our entire conversation”. I had this idea to do like an illustrated version of our conversation, it would be very fun to make it more abstract, move it around, the entire conversation was about ideas, how to make ideas real, he was asking questions about something I was working on and vice versa. And so, I just had this connection with him, every time we were in Portland we would meet up. Scott Allie, the editor-in-chief at Dark Horse, he told me that they were announcing a Fight Club sequel and he said “tell him to contact me, consider us as publisher.” I think Chuck probably chose to go with Dark Horse because they’re around Portland, where he is.
For the Winter Soldier end credits that you did, how much access did you have to information or material of the film and what was the process of coming up with that like?
It’s an interesting story, the origin of the Winter Soldier project because I did a design festival last year in Barcelona called OFFF Fest, mostly it’s digital designers and artists so I was really the only guy there that doesn’t use digital but I still gave a presentation and spoke there. I met a lot of other interesting photographers and designers there, we would see the sights and visit Barcelona together. One was this woman named Erin Sarofsky who has her own design studio and then last November, I think right around Thanksgiving, she sent me a text and said she had worked with the directors of Captain America[Joe and Anthony Russo] on something else before and now they were doing this film. They said that they already had a whole bunch of Marvel-approved design studios who were submitting pitches but she knew these directors so they were offering her a pitch too. She said “we’re going to send in five or six pitches, if you want to submit a pitch of your own, we’ll show it also and then we can collaborate on it.”

And so, that Thanksgiving I was leaving on a trip to Fiji and this would be like a 12 hour flight. She needed the pitch for it immediately, so on the 12 hour flight to Fiji I did all kinds of drawings of ideas for it. I talked to her on the phone and she had just seen the film with the directors so she gave me a sense of what kind of film it was. Based on that, we both mentioned Saul Bass, this iconic artist and designer who’s done stuff for Scorsese, Hitchcock, Kubrick; an incredible designer that we’re both inspired by and also I suggested to her that I was very inspired and influenced by Jim Steranko for the art of it and he had done Nick Fury: Agent of S.H.I.E.L.D. and Captain Americaso it would be a great homage to his comic book work as well.

And so we discussed like the look, we were both thinking black and white, stark qualities to the artwork and then on that plane trip, I stayed up the whole time drawing, it was a very enjoyable plane trip and then on the beach, I was inking it all, I would take a photo of it and email her the photos. I had half a coconut shell with my ink in it and there were all these mongooses running around. I had a backpack with my food and the mongooses would come up to my backpack with my art supplies and I would feed them breadcrumbs on the beach, you know, drawing Captain America. I took the photo, emailed it to her and she pieced it together, the sequence, she did all the typography and how it would all fit together, finessed it. She called back in a couple of days and I was on this island without much connection to anybody but she updated me and said we got the job, of all the different pitches they had, they chose the one that I sent. So that was great. And then there are some of those drawings in the original pitch that made it through to the final images in the film. 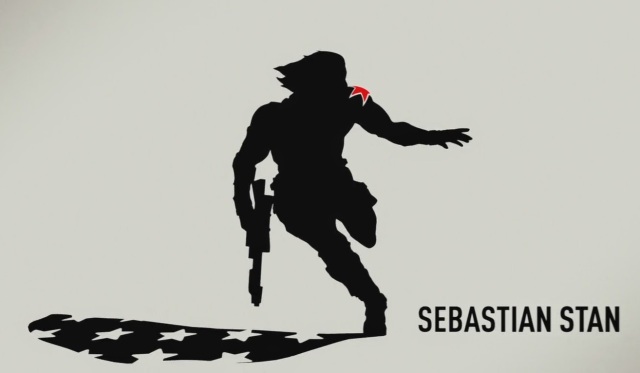 She works at a design studio in Chicago so they flew me out to Chicago in December and I worked at their studios in Chicago. There was a lot of security, like the Marvel guys came to the studio and said “in order for us to give you this job, we have all kinds of different security measures”. All kinds of security on our hard drive, a secure room with locks…they spent a lot of expenses to make their facility approved under the standards of Marvel. And then Marvel would send me all of the details, like all of the behind-the-scenes footage of Captain America, photographs that they had taken of all the equipment and all the actors. But it was all like super double-encrypted emails, it was a big hassle but it was so secure the way they worked. I had done certain things without having that reference so I had to redraw a lot of it so it was the exact hardware and tech from the film. So I just did that in Chicago, I was doing all the drawing and she was pinning them up onto the wall and like putting it in different orders and doing all the type. She had a whole team of animators all in the same room on the computers so they scanned in my drawings as soon as I finished it, they vectorised it and made it all three-dimensional and were moving it around.

Did you get to meet any of the actors from the film?
I met Sebastian Stan and Anthony Mackie, yeah. I was in Chicago two weeks ago at the Wizard World show and they were there and I was talking about how I did the drawings for them. Also, the Falcon, Sam Wilson, in Daredevil: End of Days, he’s the president in the Marvel universe so I mentioned that to them.
Shocker Toys did an action figure of Kabuki and they are kind of controversial; several
independent comics creators have spoken out about working with them. What was your experience with Geoff Beckett and Shocker toys like? 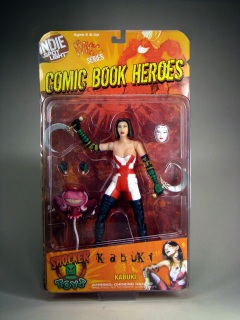 Um, I don’t know that much about any of that controversy stuff, I had done like a series of action figures with Moore Creations, Clayburn Moore sculpted some amazing action figures, some Kabuki masks, he’s offering brand new masks and yeah, the Shocker people did a Kabuki action figure, it had more joints and stuff, but I felt like I didn’t really feel like we were working that close together. When I worked with Clay Moore, he would send me like every stage of the process and we discussed it, I would send him drawings from it, I approved every stage of it with Clay and the other people. I’m still working with Clay on some new stuff too, he’s working on new Kabuki statues and masks now.
Did David Fincher have anything to say about the new Fight Club comic?
Not a word. I don’t think he said anything. Hopefully, it will be such a great, awesome book that he kind of can’t resist doing a sequel based on our sequel. It’s pretty exciting though, when I was reading the script, all the dialogue written in the script I felt was so accurate and so dead-on to the characters that we’re familiar with, that were in the original book and the film. After you hear them talking in the film, you can’t help but hear the film voices reading everything. 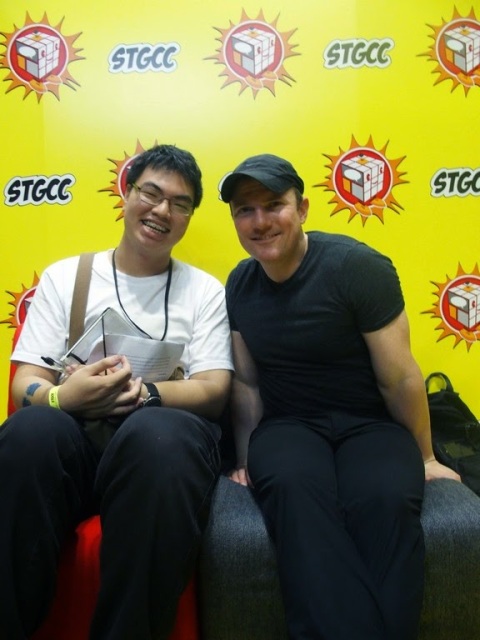