F*** is at Comic-Con to hear the stars and creators of Kingsman: The Secret Servicediscuss the spy movie
[San Diego Exclusive]
By Jedd Jong
Further into 2015, a certain famous fictional spy will be embarking on his latest cinematic adventure. But in February, moviegoers can look forward to kicking off the year with a different kind of espionage movie in the form of Kingsman: The Secret Service. In the film, Colin Firth plays Harry Hart, a dapper middle-aged gentleman who just happens to be a member of an elite covert organisation known as “Kingsman”. Harry plucks ne’er-do-well Gary Unwin, nicknamed “Eggsy” and played by newcomer Taron Egerton, off the streets to become a Kingsman recruit. The young man is put through his paces as a threat emerges in the form of maniacal biotechnology magnate Valentine, played by Samuel L. Jackson. 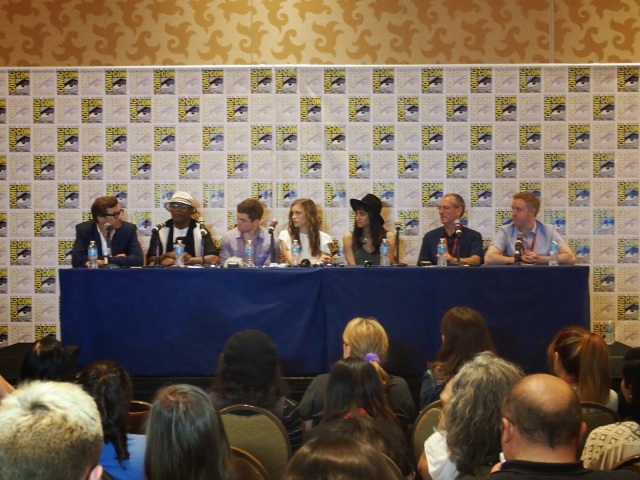 The film is based on the 6-issue comic book series The Secret Service by writer Mark Millar and artist Dave Gibbons. Millar is known for working on Marvel Comics titles such as Marvel Knights Spider-Man, Ultimates Fantastic Four and Civil War, in addition to creating Wanted and Kick-Ass. Matthew Vaughn, director of Kick-Ass, reunites with Millar on Kingsman, Vaughn working from a screenplay he co-wrote with writing partner Jane Goldman. F*** is in attendance for the press conference held at the Hilton San Diego Bayfront, with Millar, Gibbons, stars Firth, Jackson, Egerton, Sophie Cookson and Sofia Boutella on hand to discuss the movie.

This writer steps up to ask the panel a question regarding the tone of the film and the balance struck between that of an homage to 60s-style spy fiction and the exciting, sometimes-shocking panache director Vaughn is known for. This writer can’t help but feel a little nervous as Samuel L. Jackson replies “who do you expect to have the answer to that question?” It seems Vaughn would be best-suited to answering the query, but he is not on the panel. Luckily, Mark Millar steps in.
“He’s a genius so he had no problem with it at all,” the Scottish author says of Vaughn. “He’s a big fan of all this stuff [spy-fi] growing up and like all of us here, probably, he’s into that eclectic pop culture, like Quentin Tarantino, [who] takes all the stuff that he loves and puts it into one movie.” It is a good move invoking Tarantino, seeing as Samuel L. Jackson is an oft-collaborator of the director and will also appear in his upcoming film The Hateful Eight. Millar reveals that the seeds for The Secret Service were planted when he and Vaughn chatted about old-school spy movies on the set of Kick-Ass. Millar credits the Roger Moore-starring The Spy Who Loved Mewith igniting his love of spy movies and bemoans how contemporary entries in that genre have become too self-serious. “When I was a kid I used to go see James Bond and say ‘I want to be him when I grow up’ and now you go and see James Bond and he’s crying in the shower!” He remarks, referencing 2006’s Casino Royale, to laughter from the crowd. Granted, Bond was comforting Vesper who was crying in the shower, but we see where he’s coming from. “I think you want to see a spy movie where you don’t want to kill yourself after!” 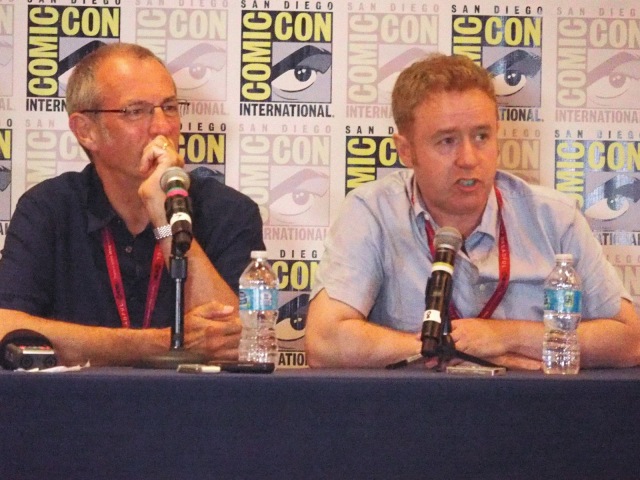 Much has been made of how this will the first big action film for Colin Firth, who like fellow esteemed British thespian Helen Mirren, has gone from winning an Oscar for playing royalty to “kicking arse” in a comic book adaptation. He describes his character Harry Hart as “the Henry Higgins of the spy world.” “It was great fun,” he says of getting to play a deadly action hero. “I’ve never had to do anything this physical, unless you include having to pull Hugh Grant’s hair,” he quips to laughter from the crowd, referencing Bridget Jones’ Diary. Firth worked with various experts including gymnasts, martial artists and ex-Special Forces soldiers to prepare for the part of the superspy. “The training was extraordinarily intense and unfamiliar to me. It was long and incredibly gratifying by the end. I wish I had done more of it.”

Firth grew up in England in the 1960s, right in the middle of the spy-fi boom. “I think to a very large extent, in terms of style and the character of the spy movies that I fell in love with, [it] has its roots in the ‘60s,” he says, name-checking The Man from U.N.C.L.E., the Harry Palmer films, The Avengers and of course the early Bond flicks. A lethal streak hidden beneath a composed, proper surface appeals to Firth: “It’s the guy in the suit who seems slick and cool and capable but very, very contained – but you cross him at your peril.” Firth reveals that he had been “sitting here waiting for the offer on Bond for long enough” and recalls, “he [Vaughn] came to me and said ‘I think you’re the last person on earth anybody would expect to kick anyone’s ass and I think it would be a big surprise but I would want you to really do it.’” Vaughn and Goldman hadn’t finished the script when they approached Firth, but the comics were enough to sell him on the idea. “I loved it, I couldn’t put them down.” Vaughn told him up front that the training process would be an arduous one but Firth was up for the challenge. “He wanted me to

really do it, to be able to really sell it, not just cut to a stuntman. He wanted it to really be me, to be utterly, convincingly me.”

Though certainly not a traditional “action star”, Samuel L. Jackson has markedly more experience in the action genre than Firth. When asked if he offered any advice to his co-star, Jackson recalls when Vaughn showed him Firth’s big fight scene. “I was sitting there slack-jawed. I was like ‘that’s Colin Firth? Really?!’ So he didn’t need any help from me.” Like Firth, Jackson was attracted to Kingsman because of the escapism of the spy action genre. He reminisces about playing pretend with his friends when he was growing up. “I get to do it as an adult on a grand scale. I get to have a real gun in my hand and it shoots fake bullets but now, when I shoot somebody, unlike my friends who always go ‘you missed me’, their chests explode. I love that.” 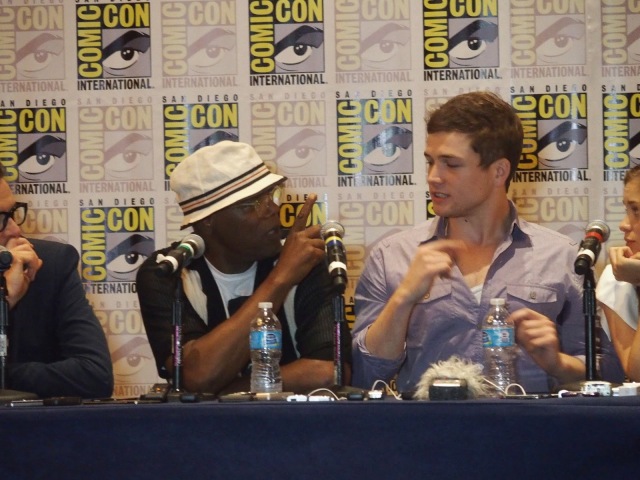 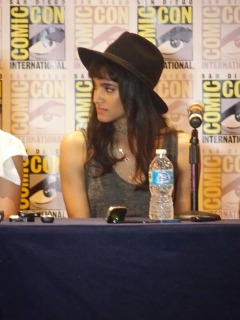 Jackson has something of a reputation for giving reporters a hard time – he egged film journalist Jake Hamilton on to say the “n-word” and decimated a news anchor for confusing him with Laurence Fishburne. Today, we get a taste of that when a reporter’s mobile phone, placed on the table to record the press conference, starts ringing. Jackson answers. “No, this is Sam. What’s going on? Who’re you looking for? You know, whoever you were calling was in the middle of a press conference and had their phone on the desk as a voice recorder and you just f**ked that up. So you want to call him back in like 30 minutes? Awesome.” The crowd is amused; the owner of the phone probably less so. “Come on, don’t be ashamed,” Jackson chides. “Claim your f**king phone.”
It must be thrilling for the younger actors to go toe-to-toe with these titans of cinema, not to mention the other big-name supporting players Michael Caine and Mark Strong. Sophie Cookson, literally fresh out of the Oxford School of Drama, plays the lead female role of Roxy, a Kingsman recruit alongside Eggsy. She concedes, “I’d be lying if I said I wasn’t slightly intimidated but we were all in it together and we all wanted to make the film as good as possible and have as much fun doing it and doing it with titans such as these has been an absolute honour and we’re very lucky.”

Algerian dancer and actress, Sofia Boutella, known as the face of Nike Women, plays Gazelle, henchwoman to Valentine. In the comics, Gazelle is male. The film retains the character’s deadly bladed bionic legs. Echoing Cookson’s sentiments, she says of getting to act alongside Firth and Jackson, “it was absolutely amazing. I think it was such an honour for all three of us to get to work with them and could not believe what was happening to us, to be honest. They’re all really, truly generous and they were absolutely amazing with us on set. It was a great experience.” 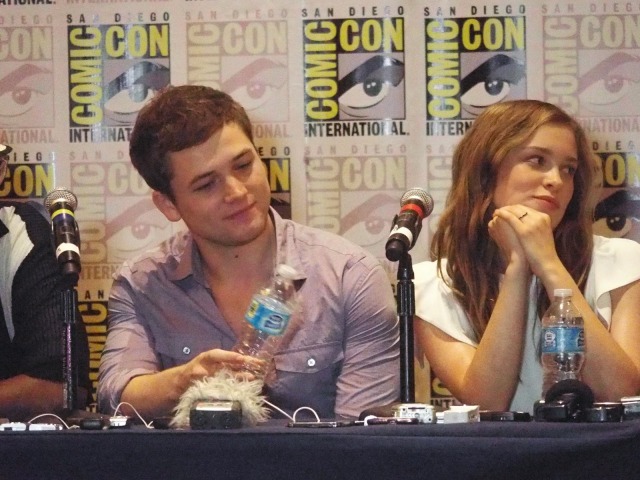 Welsh actor Taron Egerton seems a little overwhelmed by just being at Comic-Con and stays quiet through most of the press conference. He starts to answer a question about the training he had to undergo in preparation for the part of Eggsy, but is cut off by the afore-mentioned phone call. However, we do get the feeling we’ll be hearing a lot more from him soon. As a young actor, he is understandably thrilled to be in the film with Firth and Jackson. “I think the two gentlemen next to me, I think it’s probably fair to say are the quintessential living English and American movie stars and for me, getting to do scenes with both of them was not only wildly different but also completely wonderful in different ways and is something I’ll always remember.”