Sentient robots, from the terrifying (the Terminator) to the adorable (WALL-E), have long been a mainstay of science fiction films. Director Neill Blomkamp hopes Chappie can join those ranks. It is the very near future and South Africa has become the first nation in the world to utilise a police force comprised entirely of androids. These robots, called “Scouts”, are designed by engineer Deon Wilson (Patel) for the Tetravaal Corporation, run by Michelle Bradley (Weaver). Deon’s professional rival at Tetravaal, ex-military man Vincent Moore (Jackman), wants his own creation, the heavily-armed Moose robot, to be deployed instead of the Scouts. Deon is working on his pet project, a fully sentient artificial consciousness, when he is kidnapped by gangsters Ninja (Ninja), Yolandi (Visser) and America (Jose Pablo Cantillo). They force Deon to create a robot that they can train and control, resulting in the birth of Chappie (Copley). Ninja, Yolandi and America try to mould the childlike Chappie in their image as the robot comes to grips with having a consciousness of its own.

Chappie is an expansion of director Blomkamp’s 2004 short film, Tetra Vaal. Unfortunately, in making the leap from 1 minute and 20 seconds to 120 minutes, Blomkamp has exposed his shortcomings as a filmmaker. The dialogue is cringe-worthy and the characters are disappointingly two-dimensional, a shame considering Blomkamp and co-writer Terri Tatchell were nominated for a Best Adapted Screenplay Oscar for District 9. That film was praised for its original take on the alien invasion subgenre, a unique allegory for Apartheid. Here, it’s plainly visible where all the ideas have been cobbled together from. With its experimental military robot who gains consciousness, this is strongly reminiscent of Short Circuit. The Moose looks pretty much exactly like ED-209 from RoboCop, Chappie’s “ears” are cribbed from Appleseed’s Briaeros, the list goes on. 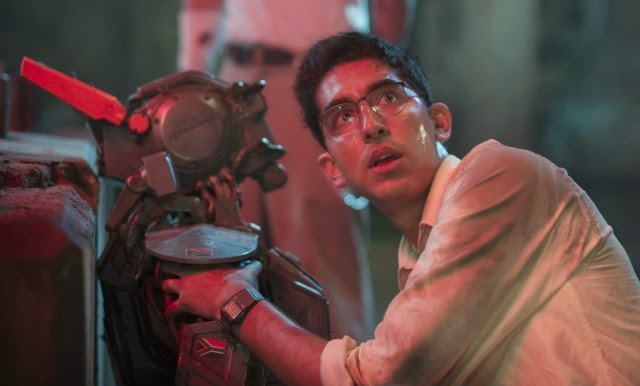 The visual effects work, supervised by Chris Harvey and supplied by effects houses including Weta, Image Engine and Ollin VFX, is top-notch. Blomkamp has proven that he knows the right way to use CGI and the digital robots in this film all have a realistic weight and texture to them. The character animation on Chappie himself is good, with those ears being particularly expressive. Despite the best efforts of the animators and Sharlto Copley, who plays Chappie via performance capture, this reviewer was unable to truly connect with the character. Blomkamp is striving to make the title character an endearing, plucky creation and there are moments when the audience might go “aww”, but there’s a spark missing. Just this past November, moviegoers embraced Baymax from Big Hero 6 and TARS from Interstellar, androids with loveable, well-defined personalities. Chappie certainly falls short of those two. 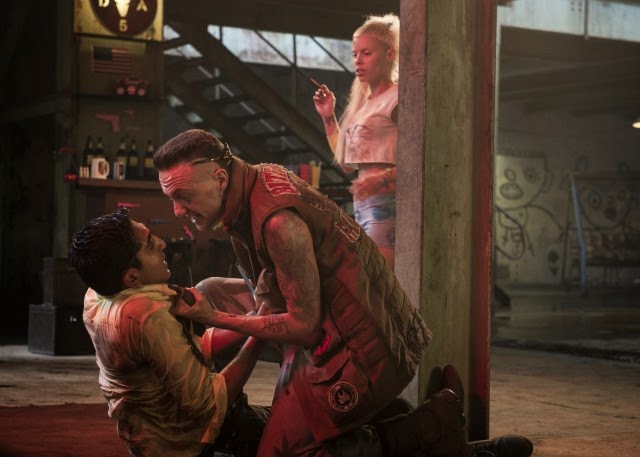 In addition to being derivative, Chappie comes off as indulgent. Very indulgent. We have Watkin Tudor Jones and Anri du Toit, better known as Ninja and Yolandi Vi$$er respectively, playing essentially fictionalised versions of themselves. Blomkamp has cast rap-rave group Die Antwoord in his movie, not in a cameo somewhere in the background, but in major supporting roles. Their shtick gets really grating really fast and while the unique South African thug culture does lend the movie a personality of its own, it quickly becomes just another flavour of annoying. The film also awkwardly bounces between the tough and the twee, with much of the comedy being derived from Chappie being taught gangster affectations by Ninja with Yolandi playing a more nurturing role, actually tucking the robot into bed and reading it a bedtime story in one scene.

Dev Patel’s Deon is as stereotypical a computer geek as they come. The character stays up all night working on programming his fully sentient AI, fuelled by Red Bull and logging his progress via webcam recordings where he speaks in frenzied tones. Hugh Jackman is as charismatic as he usually is, rocking a glorious mullet and khaki shorts as the villainous Vincent. He really should take up bad guy roles more often; we’ll get to see Jackman as Blackbeard in Pan a little later on this year. Unfortunately, instead of a climactic confrontation, we get Hugh Jackman in a virtual reality visor remotely controlling the actions of his giant killer robot in a sequence that is anticlimactic in spite of all the explosions because Jackman isn’t in the middle of the action. Sigourney Weaver doesn’t do much as the stock boss lady and it’s a somewhat sad realisation to think her character in this film could have been played by anyone.

Chappie is what happens when a promising director is given too much free rein. Yes, big studios can often stifle a director’s artistic voice, but sometimes, they need to be told “no” for their own good, lest one end up with a Michael Bay. For all the effort taken in making the world of Chappie seem realistic and lived-in, it is impossible to swallow some of the far-fetched sci-fi plot developments, particularly since the events of the film are meant to take place a year or so from now. Here’s hoping that with the Alien film Blomkamp is doing next, the rules of that particular universe make for a set playing field so he doesn’t get so carried away.

Summary:It looks like a relatively cool product and all the specs check out, but a crippling software error brings Chappiedown.
RATING: 2.5out of 5 Stars
Jedd Jong