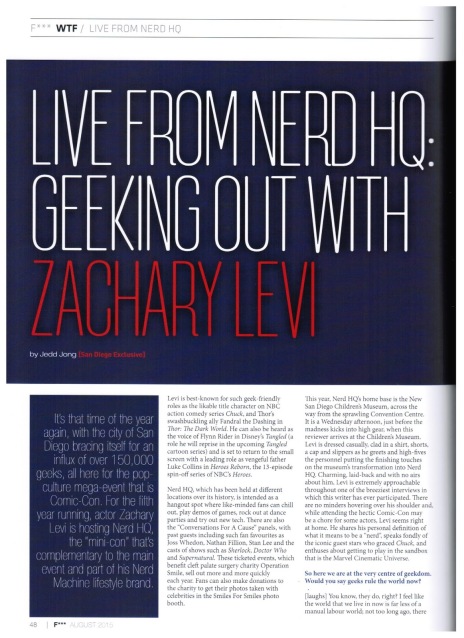 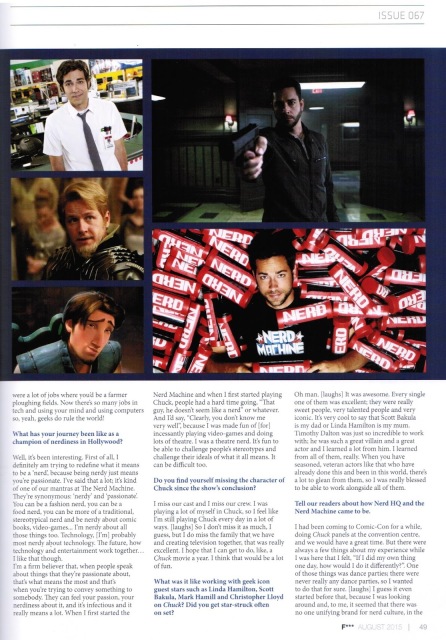 —
Text:
LIVE FROM NERD HQ: GEEKING OUT WITH ZACHARY LEVI

It’s that time of the year again, with the city of San Diego bracing itself for an influx of over 150 000 geeks, all here for the pop culture mega-event that is Comic-Con. For the fifth year running, actor Zachary Levi is hosting Nerd HQ, the “mini-con” complementary to the main event and part of his Nerd Machine lifestyle brand. Levi is best-known for such geek-friendly roles as the likeable title character on the NBC action comedy series Chuck, and Thor’s swashbuckling ally Fandral the Dashing in Thor: The Dark World. He can also be heard as the voice of Flynn Rider in Disney’s Tangled (a role he will reprise in the upcoming Tangledcartoon series) and is set to return to the small screen with a leading role as vengeful father Luke Collins in Heroes Reborn, the 13 episode spin-off of Heroes.
Nerd HQ, which has been held at different locations over its history, is intended as a hangout spot where like-minded fans can chill out, play demos of games, rock out at dance parties and try out new tech. There are also the “Conversations for a Cause” panels, with past guests including such fan-favourites as Joss Whedon, Nathan Fillion, Stan Lee and the casts of shows such as Sherlock, Doctor Who and Supernatural. These ticketed events sell out faster and faster each year and benefit the cleft palette surgery charity Operation Smile. Fans can also make donations to the charity to get their photos taken with celebrities in the Smiles for Smiles photo booth.

This year, Nerd HQ’s home base is the New San Diego Children’s Museum, across the way from the sprawling Convention Centre. It is a Wednesday afternoon, just before the madness kicks into high gear, when this writer arrives at the Children’s Museum. Levi is dressed casually, clad in a shirt, shorts, a cap and slippers as he greets and high-fives the personnel putting the finishing touches on the museum’s transformation into Nerd HQ. Charming, laid-back and with no airs about him, Levi is extremely approachable throughout one of the breeziest interviews this writer has ever participated in. There are no minders hovering over his shoulder and while attending the hectic Comic-Con may be a chore for some actors, Levi seems right at home. He shares his personal definition of what it means to be a “nerd”, speaks fondly of the iconic guest stars who graced Chuck and enthuses about getting to play in the sandbox that is the Marvel Cinematic Universe.
So here we are at the very centre of geekdom. Would you say geeks rule the world now?
[Laughs] You know, they do, right? I feel like the world that we live in now is far less of a manual labour world, not too long ago there were a lot of jobs where you’d be a farmer ploughing fields. Now there’s so many jobs in tech and using your mind and using computers so yeah, geeks do rule the world!
What has your journey been like as a champion of nerdiness in Hollywood?
Well, it’s been interesting. First of all, I definitely am trying to redefine what it means being a “nerd” because being nerdy just means you’re passionate. I’ve said that a lot; it’s kind of one of our mantras at The Nerd Machine. They’re synonymous, “nerdy” and “passionate”. You can be a fashion nerd, you can be a food nerd, you can more of a traditional, stereotypical nerd and be nerdy about comic books, videogames, I’m nerdy about all those things too. Technology, [I’m] probably most nerdy about technology. The future, how technology and entertainment work together…I like that though.
I’m a firm believer that when people speak about things that they’re passionate about, that’s what means the most and that’s when you’re trying to convey something to somebody, they can feel your passion for your nerdiness about it and it’s infectious and it really means a lot. When I first started the Nerd Machine and when I first started playing Chuck, people had a hard time going “that guy, he doesn’t seem like a nerd” or whatever. And I’d say “clearly, you don’t know me very well” because I was made fun of [for] incessantly playing video games and doing lots of theatre. I was a theatre nerd. It’s fun to be able to challenge people’s stereotypes and challenge their ideals of what it all means. It can be difficult too.

Is there anything you can tell us about Thor: Ragnarok without getting into trouble with Kevin Feige?
The truth is, I don’t know anything. I even talked to Chris Yost, who’s writing it with Craig Kyle, they both worked on the last Thor, they’re hard at work. There’s a lot of things that are under wraps but I know that they’re going to shoot next year because they already have the release date for 2017, November 2017, so here’s hoping that I get a call in the next four months saying “pack your bags, because wherever we’re shooting, you’re invited.” And I certainly hope that Fandral and Volstagg, the Warriors Three and Lady Sif and Hogun have a little bit more to do. Tadanobu [Asano], Ray [Stevenson] and Jaimie [Alexander], it was just a really fun experience and I’d like to do more, I want to do more.
What was it like working with the other actors who make up the Warriors Three and Lady Sif seeing as you were replacing a different actor from the first Thor film?
Yeah, it was very strange because they had all built relationships and friendships on the first film but it was also a really crazy story because I was originally cast as Fandral and I couldn’t do it because of Chuck and then Josh [Dallas] ended up doing it and he couldn’t do it [the sequel] because of Once Upon a Time, so it was this very strange changing of the guard but Josh was very cool about it, the cast embraced me with open arms and we had a blast!
Heroes was kind of ahead of the superhero TV show curve when it came out. What can we look forward to in Heroes Reborn and what is the nature of its connection to the original show?
Hopefully what people are going to find in Heroes Reborn is a really cool new set of characters and new storylines but that’s very tied to the original show in tone, feel. Jack Coleman is obviously back as HRG and he’s the glue that holds the old series and the new [together]. There are also some great cameos from Masi Oka, from Greg Grunberg, Jimmy Jean-Louis and a lot of references back to…and also Sendhil [Ramamurthy], Sendhil’s back as well. There’s a lot of nods to the original series, specifically what happened at the end of the original series so I think that what’s nice is that if you’ve never watched Heroes before, you can jump into it, but if you’ve watched Heroes before, you’ve also got some of those cool Easter Eggs from the original series. 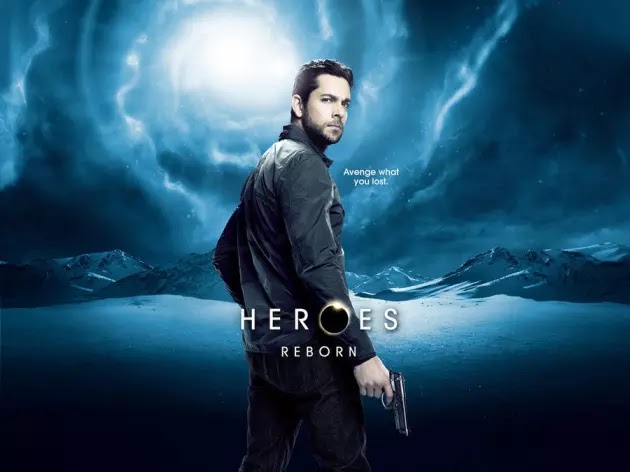 Would you say you’re an athletic person and what has it been like learning stunt choreography for projects like Chuck, Thor and Heroes Reborn?
I think I’m a pretty athletic person but I think I’m not nearly as athletic as other people, but I love that stuff. Fight choreography is almost like dance choreography because you’re almost dancing with whoever you’re fighting with. They’re gonna throw this punch, you’re gonna block it, it’s really this interesting kind of fight dance. Especially when you get to use weapons, swords and guns, things like that, I mean I love it, I love it. It’s the kind of stuff that you only get to do…it’s the only job in the world where you get to do the things that nobody else gets to do other than the real people. The only people that get to go on spy missions are real spies and the actors that play spies. The only people that get to have swordfights are real people…I mean, not that there’s a lot of people having swordfights anymore, but people who actually did that stuff and actors who are now portraying it. So, it’s a really fun job to be an actor and get to do those things because you wouldn’t normally get to do those things in everyday life.
There is a swordfight club, but the first rule of swordfight club is you do not talk about swordfight club.
You do not talk about swordfight club, yeah [Laughs].

Providing the voice for an animated Disney hero was a long-time dream come true for you with Tangled. Were you caught up in Frozen fever and what did you think of Flynn and Rapunzel’s cameo in Frozen, during Elsa’s coronation?
I saw Frozenand I was so happy for them, for Disney for making such a giant success in that, I thought it was really fun seeing Flynn and Rapunzel make that little cameo. I didn’t see it [at first] while watching the movie, I wasn’t even thinking to look, it was online that people were like “check this out!” and I went “oh, that’s fun, that’s fun!” Yeah, Kristen Bell, Josh Gad and Idina Menzel, I know them all, they’re all lovely and talented people. I was just happy for them and the success of that and now they’re making a sequel which is awesome and there’s going to be a Tangledanimated series, which is awesome, and Mandy and I are both back for that. It really was a dream come true. Like singing at the Oscars, I was like “what is happening?” It was so weird, so surreal.
Do you enjoy singing and pursuing the musical side of your career?
Oh yeah, I love singing man. I’ve sung since I was a little kid, it brings me a lot of joy and happiness. I’d like to incorporate it more in my career in the future. It’s always a matter of finding that right project, whatever fits correctly.
What was it like debuting on Broadway in First Dates the Musical?
It was amazing, it was amazing. I started my acting life doing nothing but theatre and it’s a great training ground, it’s a great place to find and refine your craft. Television and film are amazing also but they’re very different animals, you’re fulfilled in different ways and I was longing to get back to stage and do it live. No safety net, you can’t cut, you can’t try again. And to sing as well, to have a connection with an audience, it’s very symbiotic: they feed you energy, you feed them energy, they feed you energy, it’s very cyclical, very symbiotic. The theatre we did First Dates at sat about a thousand people and on a packed night, making a thousand people laugh or cheer, it’s the greatest joy in the world, nothing beats it.
What was it like being in Tomb Raider as a DLC playable character, and are you looking forward to the sequel Rise of the Tomb Raider?
Yeah, definitely. I’m a big fan of the Tomb Raider series and to be able to do that lead-up docu-series for it was really cool. I already knew a lot about how games come together but I learned even more doing that. And that they gave me that as kind of a fun gift to me, a DLC playable character with my “Nerd” shirt on, talk about being immortalized in fun ways, that’s a fun way to be immortalized for sure.