Awards movie season has officially begun with this prestige biopic focusing on chess champion Bobby Fischer, often considered the greatest player of all time. Fischer (Aiden Lovecamp as a child, Seamus Davey-Fitzpatrick as a teen and Maguire as an adult) is a chess prodigy from Brooklyn, developing a love for the game at an early at age. At 15, Fischer becomes the youngest player to earn the title of grandmaster. In the meantime, the Cold War heats up and Fischer is adamant on taking on and beating the Russians, considered the best players in the world. Represented by manager and attorney Paul Marshall (Stuhlbarg) and backed up by fellow grandmaster William Lombardy (Sarsgaard), Fischer works his way up to the 1972 world championship match in Reykjavik, Iceland. His opponent: world no. 1 Borris Spassky (Schreiber) of the USSR. As Fischer’s fame and ambition grows, so does his mental instability and paranoia, leaving his sister Joan (Rabe) worried for his well-being as the eyes of the world are fixed upon him, his opponent Spassky, and the chessboard. 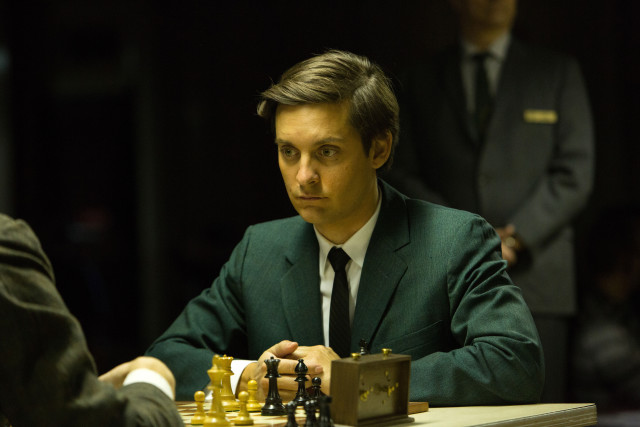 Bobby Fischer has been a magnet for fascination both within and outside the world of chess and has been the basis for several documentaries and narrative films. Pawn Sacrifice combines two subgenres that have proven popular with Academy voters – the “tormented genius” biopic and the historical sports drama. The screenplay by Steven Knight landed on the 2009 Black List of best-liked scripts making the rounds in Hollywood. Stephen J. Rivele and Christopher Wilkinson, who have a “story by” credit, also penned the biopics Ali and Nixon.
Director Edward Zwick knows audiences in general might walk into this with the preconceived notion that chess is boring and inaccessible. As such, he drums up the stakes and the thrills, establishing the background political intrigue. “We’re at war – only it’s not being fought with guns and missiles, not yet – it’s a war of perception: the poor kid from Brooklyn taking on the whole of the Soviet Union,” Marshall tells Fischer. Quite the opposite of “this is not the start of World War Three/ No political ploys,” as the lyric in the musical Chess goes. Pawn Sacrifice has inevitably drawn comparisons to the likes of A Beautiful Mind and The Imitation Game and it is certainly in that mould. There is the feeling that the events have been embellished for dramatic purposes, but then again, what biopic hasn’t done that? 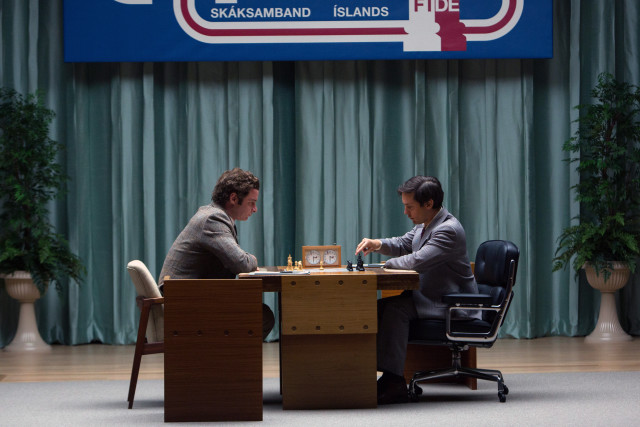 Thanks to the production design by Isabelle Guay, the costume design by Renée April and art direction by Lisa Clark and Jean-Pierre Paquet, Pawn Sacrifice authentically captures the feel of the era in which it is set; all of it bathed in cinematographer Bradford Young’s warm hues. Zwick is gunning for mass appeal and seems determined for the film not to get stuck in the “arthouse” pigeonhole, even as it clearly primed to compete at the Oscars. To establish the period, flashes of news footage showing John F. Kennedy, Martin Luther King, the Vietnam War and Richard Nixon are spliced into the montage of Fischer climbing the ranks. It can come off as clumsy and on-the-nose, but it’s not egregious enough to pull one out of the movie entirely.
This is squarely star and co-producer Maguire’s film to carry, and a role like Bobby Fischer is one many actors would kill to sink their teeth into. Fischer is portrayed as petulant, arrogant and socially inept; Maguire gamely tackling the challenge of playing a protagonist who is inherently difficult to sympathise with, but whom we have to root for. Maguire puts a great deal of effort into capturing the real-life Fischer’s mannerisms and Brooklyn accent, resulting in a performance that is good but not transcendent. Maguire is sometimes too hysterical, Fischer’s paranoia and instability manifesting on the surface level without enough nods at what’s festering deeper within his mind. Fischer’s involvement with the Worldwide Church of God sect is given passing attention – exploring his religious affiliation would have made for rich if risky material. Fischer’s anti-Semitic rants, in spite of his own Jewish roots, are touched on – a crucial element that makes his fall from grace all the more tragic. 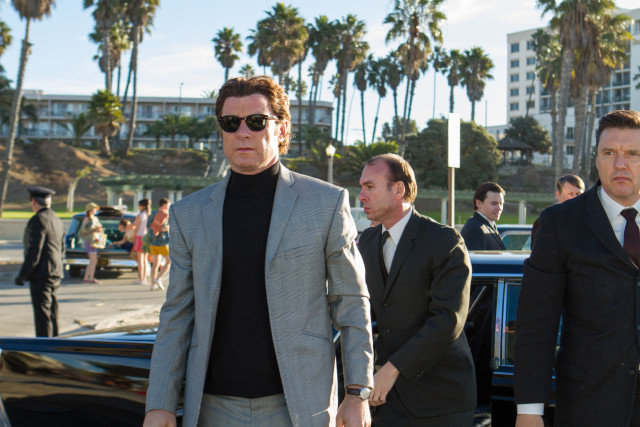 Schreiber is a commanding presence as Boris Spassky. We don’t get to spend a great deal of time with the Soviet chess team, but there is an effort made to characterise them beyond being Ivan Drago-esque “I must break you” types. Schreiber’s Russian line delivery is convincing and his equally-driven but more composed Spassky is a pitch-perfect dramatic counterpoint to the zealous Fischer. Sarsgaard, as the level-headed priest/semi-retired player who becomes Fischer’s coach, is subtly comic while being the reserved straight man. Michael Stuhlbarg has a tendency to play up the stereotype of the harried manager seen in many a rock star biopic, closer to a caricature of someone from the era rather than an authentic portrayal, but given Fischer’s varied antics, it is very easy to empathize with the man who had to keep everything under control.

While it isn’t the deep portrait of all-consuming obsession and the thin line between genius and madness it is pitched as being, Pawn Sacrifice is a gripping and entertaining biopic. For those unfamiliar with the Bobby Fischer story, it is a straightforward, coherent account of the events and serves up an intriguing slice of history. And yes, it’s Spider-Man taking on Sabretooth in chess, a game that is typically the domain of Professor Xavier and Magneto. So much for getting through the review without making that joke.
Summary: Pawn Sacrifice falls shy of greatness, but there’s no faulting Zwick’s play of couching the biopic as a thrilling high-stakes historical tale.
RATING: 3.5 out of 5Stars
Jedd Jong