Oops, just realised this is pretty late. Anyway, here’s my coverage of the launch of the Disney Infinity 3.0 video-game: 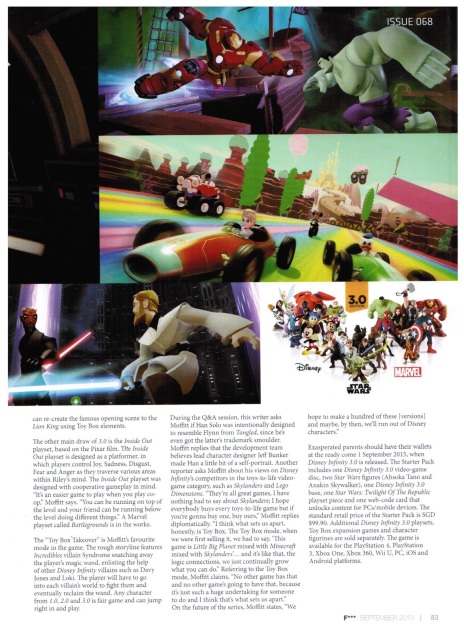 —
Text:
INFINITY TIMES THREE
F*** leaps into the toy box and emerges in a galaxy far, far away at the Disney Infinity 3.0 Edition launch
By Jedd Jong

F*** was at the Sandcrawler Building, Lucasfilm’s Singapore headquarters, for the launch of Disney Infinity 3.0. Disney Infinity, which had its first version released in 2013, is a “toys-to-life” video game which utilises collectible figurines that can be synchronised with the game, unlocking new characters from various Disney properties that can interact and go on missions. The characters in Versions 1.0 and 2.0 have included Disney and Pixar characters such as the Incredibles, Elsa and Anna and Captain Jack Sparrow. Disney Infinity 2.0 Edition introduced Marvel characters such as Spider-Man, the Avengers and the Guardians of the Galaxy. 3.0 marks the much-anticipated arrival of Star Wars characters into the Infinity toy box. 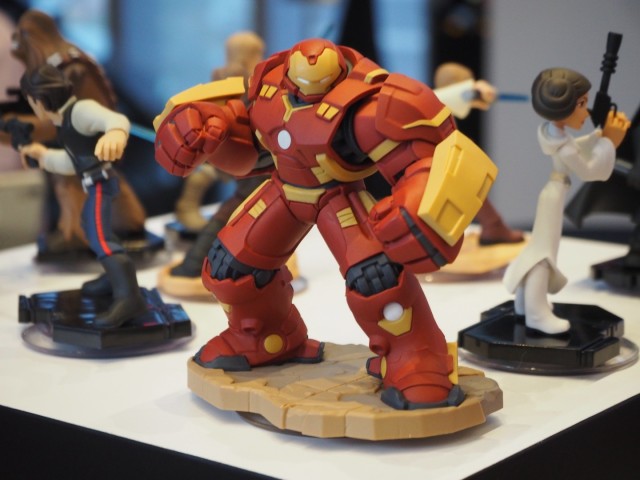 “We wanted people to play much like Andy and Woody played in Toy Story,” Disney Interactive producer Jason Moffitt says of the Disney Infinity concept. “The brand, that’s what’s strong with us – having Olaf sitting on an AT-AT leg and getting taken away because he wants to hug it, this is the only place that can happen,” Moffitt continues, referring to a trailer we were shown that depicted just that – Frozen’s loveable snowman, feeling right at home on the snow planet Hoth, embracing the foot of the Imperial Walker from Empire Strikes Back.

Disney Infinity encompasses various styles of gameplay, with open world sandbox elements alongside platforming, top-down dungeon crawl and cart racing modes. Developed by Avalanche Software, other developers were brought on for 3.0to enhance the gameplay. Ninja Theory of Devil May Cry fame were enlisted to devise the lightsaber mechanics and Sumo Digital, known for Sonic Racers, helped build out the cart racing mode.

The game has been touted as offering the “complete Star Wars experience”, with the Twilight of the Republic playset which covers the prequel trilogy and the Clone Wars, as well as the Rise Against the Empire playset, which covers the original trilogy. The Twilight of the Republic playset comes with Anakin Skywalker and Ahsoka Tano figurines, while the Rise Against the Empire playset is packaged with Luke Skywalker and Princess Leia figurines. Players will get to relive iconic moments from the films, including the Death Star trench run and the Endor speederbike chase and battle villains such as Darth Maul and General Grievous. Fan-favourite Boba Fett is available as an exclusive figurine with the PlayStation bundle.

There will also be a playset for the new Star Wars film, The Force Awakens. Finn and Rey were revealed as Disney Infinity characters at the recent D23 expo. There will also be more characters to be announced further down the line. Moffitt revealed that while Star Wars Battlefront will incorporate elements from The Force Awakens, Disney Infinity 3.0 will be the only video game that features the story of the film, at least for the time being.
The Playset Mode can only be occupied by the characters appropriate for their worlds, but in 3.0, any Star Wars character can inhabit any Star Wars world, which means Luke can go back to the Clone Wars. Toy Box Mode is an open world playground where players can create whatever they imagine. Moffitt described a “Lion Kingchallenge”, in which a contestant was able to re-create the famous opening scene to the Lion King using Toy Box elements.

The other main draw of 3.0 is the Inside Out playset, based on the Pixar film. The Inside Out playset is designed as a platformer where players control Joy, Sadness, Disgust, Fear and Anger as they traverse various areas inside Riley’s mind. The Inside Out playset was designed with cooperative gameplay in mind. “It’s an easier game to play when you play co-op,” Moffitt says. “You can be running on top of the level and your friend can be running below the level doing different things.” A Marvel playset called “Battlegrounds” is in the works.
The “Toy Box Takeover” is Moffitt’s favourite mode in the game. The rough storyline features Incredibles villain Syndrome snatching away the player’s magic wand, enlisting the help of other Disney Infinity villains such as Davy Jones and Loki. The player will have to go into each villain’s world to fight them and eventually reclaim the wand. Any character from 1.0, 2.0 and 3.0 is fair game to jump right in and play.
During the Q&A session, this writer asks Moffitt if Han Solo was intentionally designed to resemble Flynn from Tangled, since he’s even got the smoulder. Moffitt replies that the development team believes lead character designer Jeff Bunker made Han a little bit of a self-portrait. Another reporter asks Moffitt about his views on Disney Infinity’s competitors in the toys-to-life video game category, such as Skylanders and Lego Dimensions. “They’re all great games, I have nothing bad to say about Skylanders, I hope everybody buys every toys-to-life game but if you’re gonna buy one, buy ours,” Moffitt replies diplomatically. “I think what sets us apart, honestly, is Toy Box. The Toy Box mode, when we were first selling it, we had to say ‘this game is Little Big Planet mixed with Minecraft mixed with Skylanders’…and it’s like that, the logic connections, we just continually grow what you can do.” Referring to the Toy Box mode, Moffitt claims “no other game has that and no other game’s going to have that because it’s just such a huge undertaking for someone to do and I think that’s what sets us apart.”  On the future of the series, Moffitt states “we hope to make a hundred of these [versions] and maybe by then we’ll run out of Disney characters.” 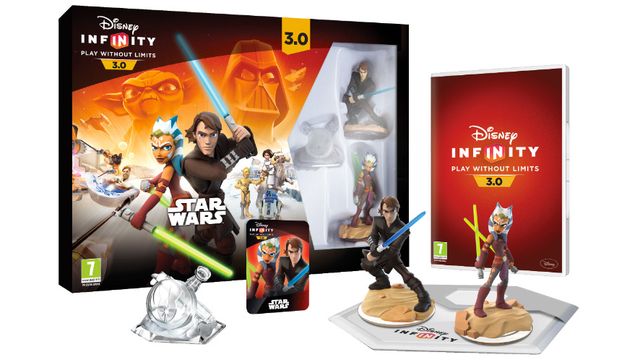