Sacha Baron Cohen asks the question: “what if James Bond had an idiot brother who kept getting in his way?” Baron Cohen plays Norman “Nobby” Butcher, a ne’er-do-well football hooligan from the English town of Grimsby with a wife (Wilson) and 11 children. Nobby has spent 28 years searching for his long-lost brother Sebastian (Strong); they were separated as children when Sebastian was adopted by a wealthy family. Sebastian is now an elite secret agent with the Tiger’s Tail, an offshoot of MI6. The brothers finally reunite, but it’s under less-than-ideal circumstances as Nobby bungles Sebastian’s latest mission. When Sebastian is accused of a crime he didn’t commit and branded a rogue agent, he can only count on analyst Jodie (Fisher) and is forced to trust his irresponsible, dim-witted brother Nobby. The crime syndicate Maelstrom is out to assassinate philanthropist Rhonda George (Cruz) and it’s up to the super-spy and his not-so-super brother to foil the plot.
The film is released in the U.S. as The Brothers Grimsby but is originally titled Grimsby. There’s a cultural specificity to a lot of the humour and there are broad stereotypes of working-class English folk aplenty. Baron Cohen, never known for playing it safe, also revels in exceptionally crass gross-out humour, several comedic set-pieces boasting jaw-dropping levels of wince-inducing crudeness. Baron Cohen’s subversive brand of comedy can often come off as mean, and the “gotcha!” humour of Borat or Brüno often comes at the expense of well-meaning bystanders. 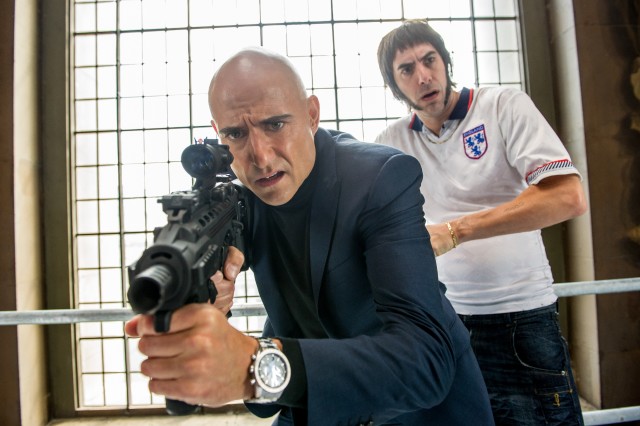 Weirdly enough, The Brothers Grimsby doesn’t feel as mean-spirited as other Baron Cohen works. It’s an assault on good taste in general, more than any demographic in particular. That said, the residents of the real-life Grimsby have understandably taken umbrage with the film’s portrayal of their town as violent and litter-strewn. The jokes about sexual assault, AIDS and gun violence might be uncomfortable to more sensitive viewers, but it’s a Sacha Baron Cohen enterprise after all and he’s all about dancing on toes. The sentimental through-line of a brotherly bond is meant to be sappy on purpose, but it works as a fine counterpoint to the over-the-top jokes and a tiny bit of genuine sweetness does come through.
Louis Letterier, a graduate of Luc Besson’s stable of directors, has mostly helmed also-rans action flicks such as The Transporter, The Incredible Hulk and Clash of the Titans (2010). He brings a Hollywood slickness to The Brothers Grimsby and there’s even some globe-trotting involved, with our heroes travelling to South Africa and Chile. Letterier employs the gimmick of having the action scenes be viewed from a first person perspective, by way of footage captured by Agent Sebastian Graives’ high-tech contact lens. Unfortunately, a lot of the fight sequences are choppy, with an excessive use of shaky-cam and quick cutting. 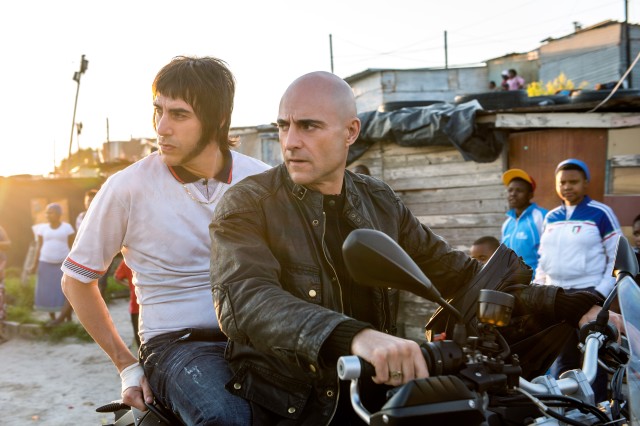 Baron Cohen might be front and centre, and he’s believable as a dumb, uncouth football hooligan who really has a heart of gold, but the casting coup here is Strong. With his intimidating stature, intimidating voice, intimidating face, intimidating everything really, Strong is not typically known for his comedic chops. He very gamely throws himself into the role, which allows him to kick ass but also frequently requires that he doff all dignity and just let the humiliation wash over him. The main issue with the casting is that Sebastian is supposed to be Nobby’s younger brother – Strong is 52 and Baron Cohen is 44.
This already looks like a vanity project, so it’s a good move on Baron Cohen’s part to not have his real-life wife Fisher portray his onscreen wife; Fisher instead plays the helpful MI6 analyst who updates Sebastian over his earpiece. Wilson audibly struggles with the accent, but then again Baron Cohen isn’t even aiming for the right accent, putting on a Yorkshire dialect instead of a North East Lincolnshire one. Cruz contributes a dash of class and Adkins busts a martial arts move or two as the lead henchman.

The Brothers Grimsby goes for all-out shock value, but it trades in tropes seen in numerous comedies in which unlikely, under-qualified regular guys are suddenly thrust into duty as secret agents. It’s not as charming or even as funny as last year’s Spy, and it’s certainly a whole lot more self-indulgent. There are multiple times when the film disappears up its own ass, so to speak, getting too carried away with the filthy jokes. However, it clocks in at a very brisk 83 minutes and zips along with an irreverent energy that this reviewer found difficult to resist. If “Johnny English, but absolutely not for kids. At all” is what you’re after, The Brothers Grimsby does fit the bill.
Summary: Gloriously, unabashedly crass and gross, The Brothers Grimsby is sufficiently fast-paced and funny, with Mark Strong delivering one of his best performances yet.
RATING: 3.5out of 5 Stars
Jedd Jong