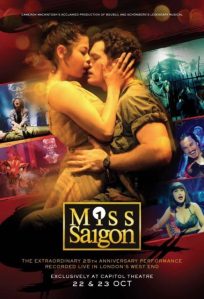 Composer Claude-Michel Schönberg and lyricist Alain Boublil are best known for their musical adaptation of Victor Hugo’s Les Misérables. The show that immediately followed Les Miz is generally considered to be their other most famous work, Miss Saigon. The musical, which premiered in 1989 at London’s Royal Drury Lane theatre, is based on Puccini’s opera Madama Butterfly. The doomed romance between a Japanese geisha and a United States Navy lieutenant during the early 20th Century in Madama Butterfly was re-contextualised and set against the Fall of Saigon, with a Vietnamese bar girl and an American G.I. as the star-crossed lovers instead. This gala performance commemorating the 25th anniversary of the show was filmed in October 2014 at the West End’s Prince Edward Theatre.

It is 1975, and Kim (Noblezada), a 17-year-old country girl, is working her first night at the Dreamland bar in Saigon, run by a French-Vietnamese entrepreneur known as ‘the Engineer’ (Briones). While the vampy Gigi (Go) is favoured by the bar’s G.I. patrons, the fresh-faced Kim catches the eye of Chris (Brammer), a disillusioned soldier. Chris’ friend John (Maynard) purchases Kim’s services for Chris. Chris and Kim fall in love and are quickly married in a traditional ceremony, much to the ire of Thuy (Hong), Kim’s cousin to whom she was betrothed. Chris and Kim are rent apart by the Fall of Saigon.

It is three years later, and John is running an organisation to reunite children conceived during the war with their American fathers. Chris, now married to an American woman named Ellen (Carroll), learns that he fathered Kim’s son Tam. Chris and Ellen travel to Bangkok where Kim and the Engineer have relocated, the sudden revelation throwing all their lives into uncertainty.

This reviewer is a fan of the musical, and has fond memories of pestering his parents to bring him to see it at age 8. Most of sexual innuendo was lost on him, as were the details in the set design, because he had forgotten to bring along his glasses. Over the years however, it’s become very clear how problematic, to put it politely, the story is. Miss Saigon is chockful of stereotypes that are not only retrograde, but hurtful. It’s the textbook example of romantic racism, abounding with ethnic caricatures and driven by a ‘white saviour’ narrative. While this reviewer did want to cling to his childhood memory of ‘that show with the helicopter’, he’s found it increasingly difficult to do so, with many of the Asian-American protest groups raising salient points against Miss Saigon.

It doesn’t seem like Schönberg and Boublil set out to make an actively racist musical, but really, who would set out to make an actively racist musical? The duo was inspired by a photograph of a Vietnamese mother tearfully bidding her child farewell at Tan Son Nhut Air Base, the child heading off to the United States where her ex-G.I. father would provide a better life for her. The rousing gospel-tinged number Bui Doi does ring of heartfelt advocacy. However, the troubling elements of the show are impossible to ignore because they aren’t extraneous flashings that can be trimmed away, they are the foundation on which the story is built. 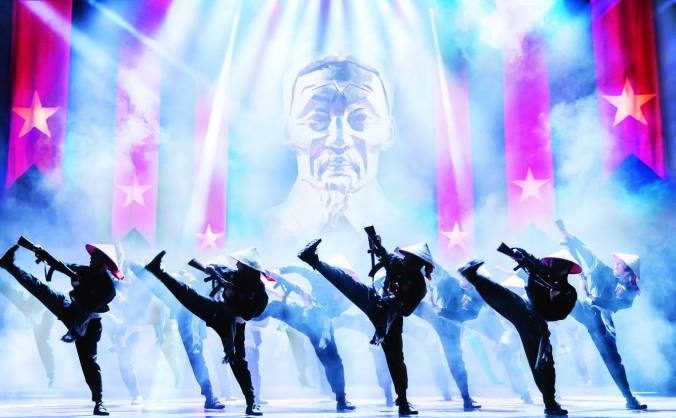 All of that said, this production is staged magnificently. Inspired by the original sets of Adrian Vaux, Matt Kinley and Totie Driver’s new production design is eye-catching and elaborate, with the streets of Bangkok and Saigon rendered with enough grit. A faceted sheet metal sculpture of Ho Chi Minh’s face, at once beatific and severe, watches over the Viet Cong soldiers during The Morning of the Dragon. During the song I Still Believe, which juxtaposes Kim pining for Chris three years on with Ellen comforting her PTSD-addled husband, Chris and Ellen’s bed is elevated above Kim’s shack. And yes, the helicopter is still a cornerstone of live theatre spectacle, the physical prop now enhanced with projection effects. 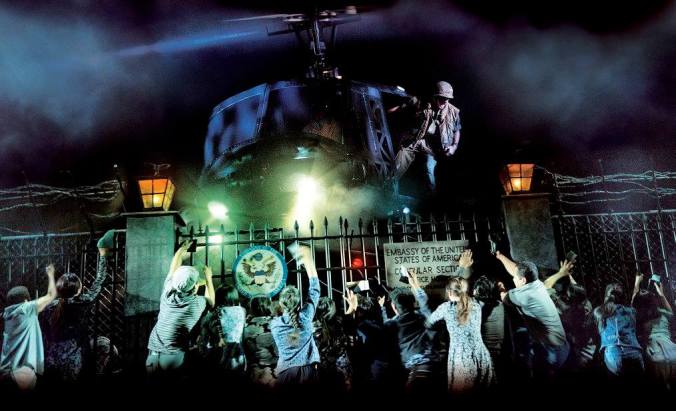 The songs in Miss Saigon may not have stuck in the public consciousness the way Les Miz’s tunes have, but there are some beautiful pieces here – even if they suffer for being compared directly with Puccini’s compositions. The Last Night of the World, with its smoky saxophone solo, and the lilting flute that opens Sun and Moon are very evocative. While some of Boublil and Richard Maltby Jr.’s lyrics are cheesy and melodramatic (“I have a heart like the sea/A million dreams are in me”), there are amusing bits of wordplay (“I should be American/Where every promise lands”).

Noblezada, who was 18 at the time of this performance, is remarkable in the lead role. Her vocal mastery is astounding, Noblezada conveying the sweetness and raw pain integral to the character. The Charlotte, North Carolina-born actress, who is of Filipino and Mexican descent, does great justice to original Kim actress Lea Salonga. Yes, it is distasteful that Kim eventually amounts to little more than a tragically fragile victim of circumstance, but her fierce love for her son and her enduring heartache as acted by Noblezada are sufficiently moving. 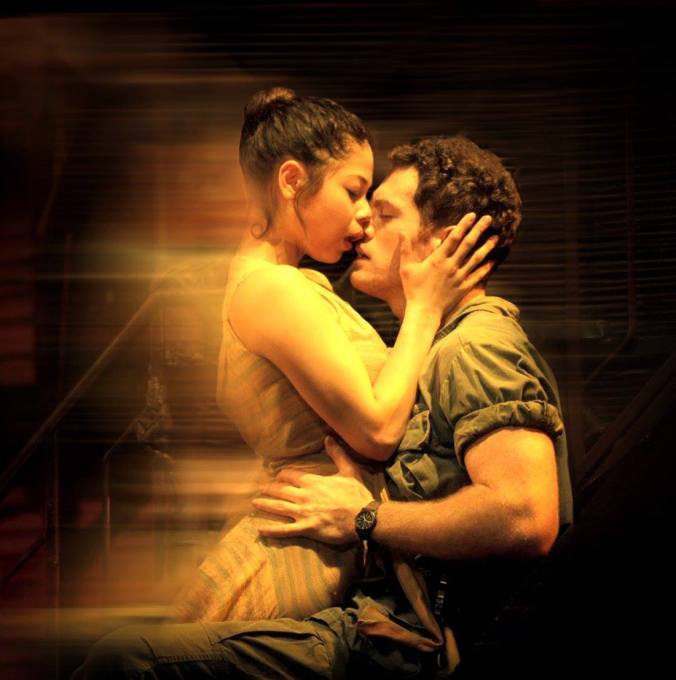 Brammer, the love child of Neil Patrick Harris and Matthew Morrison in both physical appearance and vocal stylings, has plenty of the boy scout quality Chris needs. His rendition of Why God Why? is as desperate as it is pretty, if not as viscerally stirring as some other versions. Carroll’s rich mezzo-soprano voice and measured, compassionate demeanour make her an ideal Ellen. Neither Kim nor Ellen is to blame for the predicament they find themselves in, and there is the danger of Ellen being mischaracterised as a villain, something that this performance steers well clear of.

The Engineer has all the best lines and gets the gleefully glitzy show-stopping number The American Dream, so you’ve got to have someone with the charm and swagger to pull it off in the role. Briones amply delivers, hitting all the right notes as the charismatic sleaze-ball. Amoral and opportunistic, the Engineer is your archetype loveable rogue, not dissimilar to Les Miz’s Thénardier. Go, who has portrayed Kim before, delivers one of the musical saddest moments with her gut-wrenching rendition of The Movie in My Mind. This reviewer wouldn’t call him the weak link per se, but Maynard’s John fell a little short. The character is meant to transform from brash hard-partying wingman into a sober humanitarian, but Maynard’s Act 2 John doesn’t feel sufficiently different from Act 1 John.

Long-time fans of the musical will be thrilled with the finale, in which original stars Salonga, Simon Bowman and Jonathan Pryce all perform with their 25th anniversary counterparts. Compared to the quartets comprised of past Valjeans and Phantoms for the 25th anniversary performances of Les Misérables and Phantom of the Opera respectively, this tribute is more substantial. It is immensely enjoyable seeing the pride and happiness on Salonga’s face as she sings alongside Go and Noblezada.

If you’ve become attached to Miss Saigon, you’ll likely come away from this film of the musical quite satisfied. However, this reviewer would implore you to at least consider the grievances of the show’s detractors and not dismiss them out of hand. It’s certainly okay to appreciate the artistry, but we have to ask ourselves if we really want Asians to still be drawn this way in western popular culture.

Summary: It’s lavishly staged and beautifully sung, but Miss Saigon’s deep-seated issues of racism and misogyny cannot be drowned out by the whirr of helicopter rotors.