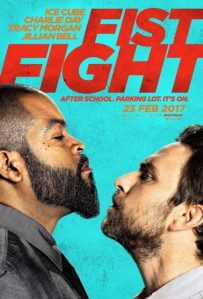 As far as big screen match-ups go, Charlie Day vs. Ice Cube might not be as exciting as Batman vs. Superman or Rocky vs. Apollo Creed, but it’s got to be funny, right? Day plays Andy Campbell, a milquetoast English teacher at Roosevelt High School. When hot-tempered history teacher Ron Strickland (Cube) loses his job after lashing out at a student, he blames Campbell for snitching on him. Strickland challenges Campbell to a fight in the parking lot on the last day of school. Campbell has promised his daughter Ally (Nisenson) that he’d be at her talent show performance, and his wife Maggie (Garcia Swisher) is close to delivering their second child, so he has enough on his plate. In a panic, Campbell seeks the help of Holly (Bell), the guidance counsellor who frequently behaves inappropriately towards students, and the inept coach Freddie Coward (Morgan). The ‘teacher fight’ becomes the talk of the school, and the town at large, as all gather to witness the momentous throw-down.

Fist Fight is a loose remake of the 1987 comedy Three O’Clock High – in the original film, the fight was between a meek student reporter and a brutish new student. Fist Fight is a production line comedy through and through, and one quickly realises that none of the characters are exactly likeable. There’s only so much humour that can be mined from the premise of teachers, instead of students, engaging in a schoolyard fight. The attempt to tack on half-hearted commentary about the state of the public school system in the United States doesn’t make this movie any more worthwhile. Each character’s personality and actions are exaggerated for comic effect, but because everything is so over-the-top, it’s difficult to find a foothold and get invested in the characters. Each situation that arises seems like it could be dealt with more sensibly, but hijinks wouldn’t ensue otherwise. Director Richie Keen lets his actors riff and improvise, but the comedy feels stale, with moments like a child swearing for shock value coming off as the work of a hack. 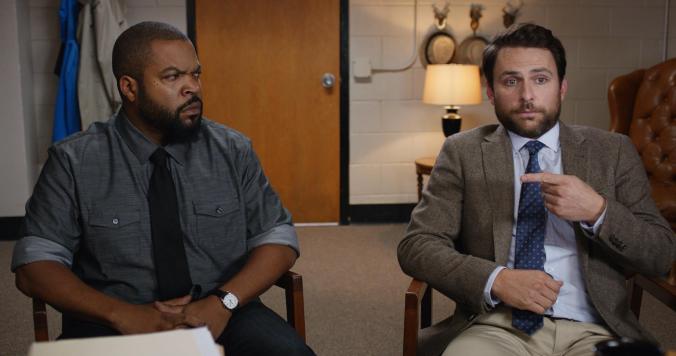 Both Day and Cube play characters that are in line with their established comedic personas. Day is shrill and neurotic, the pushover who apologises too much and who lets his students and colleagues alike run roughshod over him. While the character is meant to be sympathetic, he’s often unbearably annoying. Because he doesn’t want to engage in violence with a fellow teacher, Campbell is characterised as “a pussy” and is mocked by everyone from his charges to the 9/11 operators. This lazily perpetuates the notion that the only way a ‘real man’ can solve a problem is by physically beating said problem up, and that any other approach is a tell-tale sign of weakness. 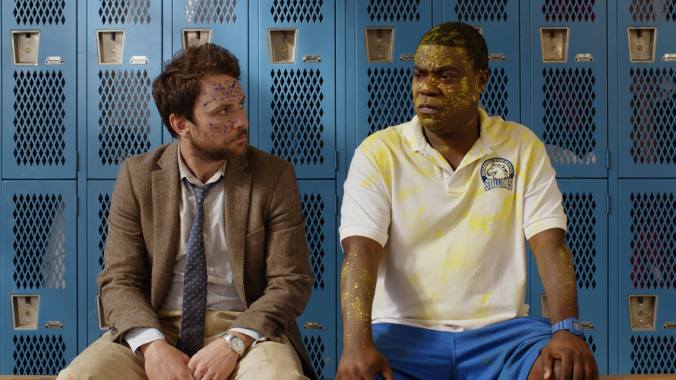 Cube’s no-nonsense, imposing shtick is no different from the roles he’s played in recent comedies, the Ride Along movies being the immediate examples that come to mind. Fans of the rapper/actor will get a kick out of a reference to one of NWA’s biggest hits, but Cube does nothing too interesting over the course of the film. A teacher who brandishes a fire axe to intimidate his students and proceeds to hack a desk to pieces with said fire axe is a dangerous person who shouldn’t be allowed near, let alone in, a school. Real-world logic goes flying out the window, and with it, any inclination to care about these characters. 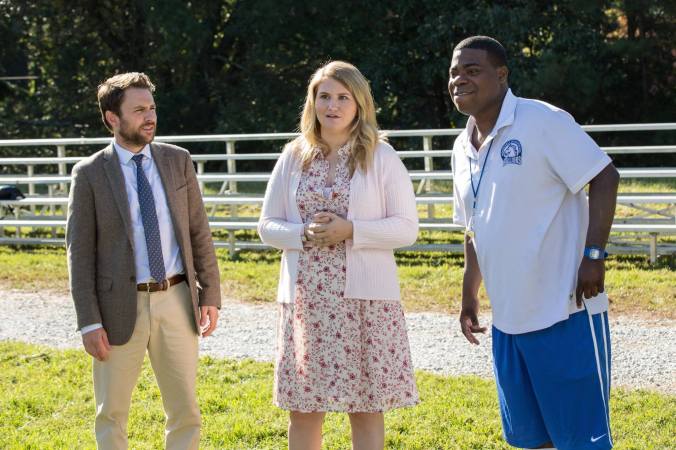 The film does have a funny supporting cast, but they’re stuck with tired material – or frantically trying to generate their own. It’s nice to see Morgan on screen again, in his first role since his near-fatal car accident in 2014. Alas, he doesn’t do much beyond bumbling about being ineffectual. Bell’s character is built upon the single joke that she’s a guidance counsellor who’s a terrible example to her students, and that she’s obsessed with sleeping with them. It’s amusing for a bit, then becomes tired and distasteful. Hendricks is funny as a possibly psychotic teacher, but is underused. Garcia Swisher is just “the wife”, relegated to the side-lines for most of the film, while Nisenson is “the daughter”.

Fist Fight is an unpleasant if fitfully amusing comedy, built on a flawed premise and inhabited with characters with whom we want to spend as little time as possible. Thankfully, it’s all over in 91 minutes, with several minutes of bloopers used to pad out that running time.