SHE AIN’T HEAVY, SHE’S MY SISTER
F*** joins the congregation for the preview of Sister Act the musical
By Jedd Jong 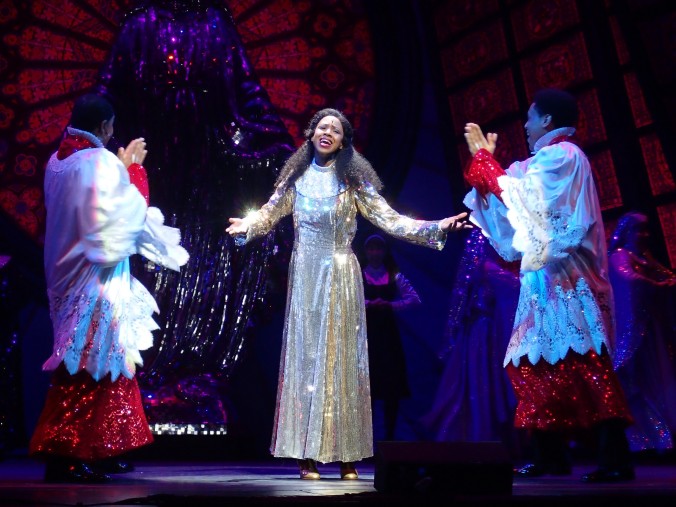 The Asian tour of the musical Sister Act takes the soulful nuns to Singapore, following a U.S. national tour. F*** was at the MasterCard Theatres in Marina Bay Sands, Singapore, for the press call on 8th May 2017, ahead of the show’s premiere on 9th May. We were treated to a performance of two numbers from the show, spoke with some of the cast and crew, and took a backstage tour to get a glimpse of the production’s inner workings.

Based on the beloved 1992 film of the same name, Sister Act chronicles the misadventures of Deloris Van Cartier (Dené Hill), a lounge singer who inadvertently witnesses her mobster boyfriend Curtis (Brandon Godfrey) commit a murder. For her protection, Deloris is placed in a convent, where she runs afoul of the Mother Superior (Rebecca Mason-Wygal), a stickler for tradition. Deloris winds up revitalising the convent with an innovative approach to religious music, befriending Sister Mary Patrick (Emma Brock) and helping the shy Sister Mary Robert (Sophie Kim) unearth her powerful potential as a vocalist. In the meantime, Curtis gets wind of her whereabouts, as police officer Eddie Souther (Will T. Travis) hunts Curtis down.

Sister Act’s libretto was written by Bill and Cheri Steinkellner with additional book material by Douglas Carter Beane; with music by Alan Menken and lyrics by Glenn Slater. Menken and Slater have also collaborated on Disney’s animated films Tangled and Home on the Range, and the film-to-stage musicals The Little Mermaid, Leap of Faith and A Bronx Tale. Sister Act opened on London’s West End in 2009 and ran for just over a year, with a revised version of the show running on Broadway from 2011 to 2012. Sister Act was nominated for multiple Tony Awards, including Best Musical, Best Original Score and Best Performance by a Leading Actress in a Musical, but won none.

While the plot remains largely faithful to that of the film, audiences should expect some differences. The film tooks place in the early 90s, which is when it was made, while the musical is set in 1970s Philadelphia. Music director Chris Babbage described it as a “musical snapshot of a moment in history,” stating that the score incorporates elements of “disco, a little bit of funk, a little bit of Motown”.

Unfortunately for fans attached to the covers of I Will Follow Him, My God (My Guy) and Oh Maria performed in the film, those are absent from the stage version. “Everything in this score is fresh,” said Babbage. He promised “intricate harmonies among the nuns as they learn to sing and as they have their big show-stopping numbers, 2, 3, 4-part harmonies,” adding that the lead role of Deloris is vocally challenging because the disco numbers require a large range. Babbage’s personal favourite number is Fabulous, Baby!, which establishes Deloris’s character at the top of the show, that he said “encapsulates Deloris and her energy,”

Sophie Kim, who plays Sister Mary Robert, is the first Asian actress to win the role in an English-language production of Sister Act. Kim is an established musical theatre star in South Korea, having performed in productions of West Side Story, Dreamgirls, Mamma Mia and Rent there. In 2010, she made the leap to Broadway, attending the New York Film Academy’s Musical Theatre Conservatory, working hard to overcome the language barrier. She went on to play Gigi in Miss Saigon and Tuptim in The King and I. Kim explained the affinity she has with Mary Robert, saying “this character is just like me in [the] U.S. I obeyed and followed whatever [anyone] told me to do. I always followed rules as well.” According to her, it is Mary Robert who “is going through the biggest change in this show.” Kim admires how Mary Robert becomes a “really brave, amazing woman who can stand up for what she believes,” saying its why she loves the role.

plays Curtis Jackson, the mobster who goes from Deloris’ boyfriend to ruthlessly pursuing her after she sees him kill a man. The equivalent character in the film was named Vince LaRocca, and in the first version of the stage musical, was named Curtis Shank. Godfrey, alongside the actors playing Curtis’ goons, performed When I Find My Baby for the press.

When asked if it’s more fun to play the bad guy, Godfrey replied “Oh, absolutely.” Godfrey, who also played the abusive Mister in The Colour Purple, said he is often cast in villainous roles “because of [his] size”. While he might play a tough guy on stage, Godfrey has a sensitive side: his favourite part in the show is when Mother Superior finds a Bible under Deloris’ pillow, and softens her attitude towards the nightclub singer. “The whole time, Mother Superior has been angry at this girl, and then she realises ‘wow, we’ve done our job’, so that’s my favourite part,” Godfrey said. 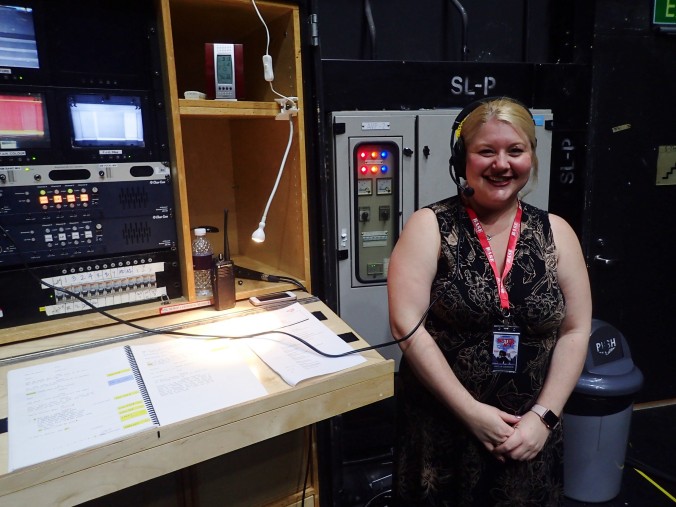 Production stage manager Molly Goodwin took a group of journalists backstage for a glimpse behind the scenes. Goodwin was also the stage manager for the 2014-2015 US tour of the show, and thus knew Sister Act inside-out. Five shipping containers are required to transport the set pieces, costumes and other gear. Goodwin showed us where she’s stationed during each show: a console with monitors showing the front-of-house and the music director in the orchestra pit, with a cue sheet on a stand indicating when various lighting, sound and set cues are meant to occur in the show. Goodwin explained that she has more than 12 people, handling various aspects of the production, in her ear via a headset during each show. 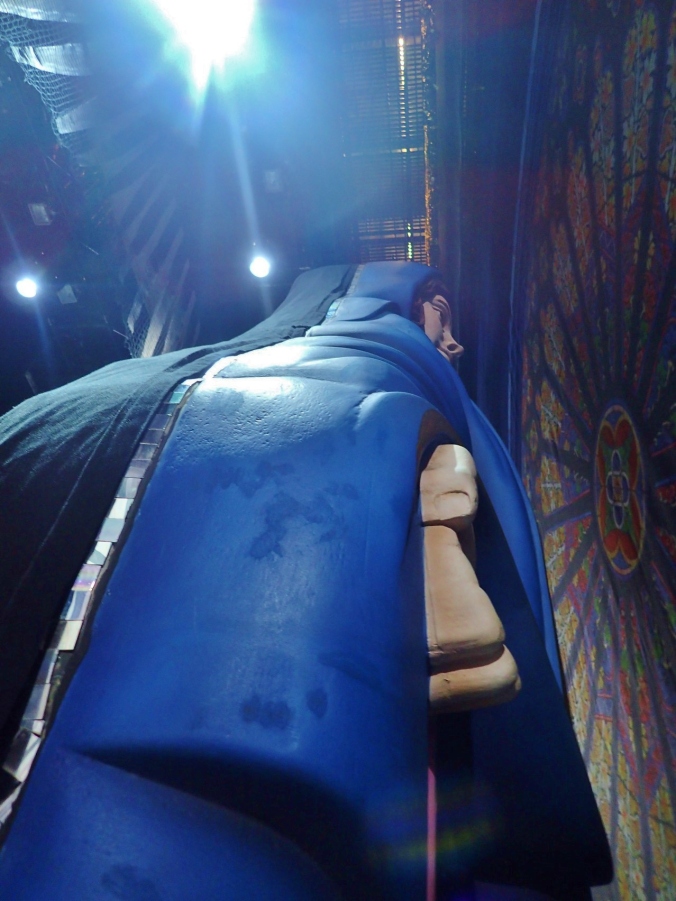 Goodwin introduced us to a star of the show with no lines: the statue of Mother Mary. The figure stands just under five metres tall, and is covered by a tarp whenever the curtain is down. The statue has two sides: for most of the show, the side painted in normal colours is what the audience sees. Then for the finale, the statue is spun around to reveal a facade completely covered in mirrored tiles, like a disco ball. The statue is not the only one who gets a sparkly makeover: the cast don sequinned habits for the climactic number Spread the Love Around, which was performed at the press call. Goodwin described the mass backstage costume change as being choreographed like a dance.

When this writer asked Goodwin how she deals with the stress of stage managing a major production like Sister Act, Goodwin said that she feels in her element, and that sitting behind a desk and accounting would be really stressful for her. She said she sometimes has to remind her co-workers, “Guys, guys, we need to take the stress level down! We’re not cutting anybody open, we’re playing dress-up and make-believe!”, adding “we just have to keep a realistic perspective on everything.”

What’s the biggest thing audiences can look forward to from Sister Act? According to Nancy Evans, who plays Sister Mary Lazarus, it’s a good time. She hopes audiences will find themselves “having fun and feeling good about themselves as well as the show,” adding that “it’s a high-energy show that makes people laugh and cry, and stand up and sing at the end.”

Sister Act is presented by BASE Entertainment Asia and runs from 9th May to 28th May at the MasterCard Theatres at Marina Bay Sands. Tickets are from $65 to $185 via Sistic and MBS.