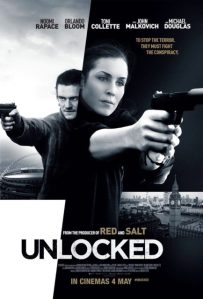 Erstwhile Lisbeth Salander Noomi Rapace steps out from behind the computer and into full action heroine mode in this thriller. Rapace plays Alice Racine, one of the CIA’s top interrogators. After failing to extract information from, or ‘unlock’, a suspect in time, dozens lost their lives in a terror attack in Paris four years earlier. Since then, Alice has been laying low. She is called back into action by senior MI5 operative Emily Knowles (Collette) and the CIA’s head of European operations Bob Hunter (Malkovich). After a CIA agent is killed in London, Alice is tasked with foiling an act of bioterrorism that will cripple London. Alice finds that her mentor and former handler Eric Lasch (Douglas) is also in danger. A spanner is thrown into the works in the form of Jack Alcott (Bloom), an enigmatic soldier-turned-thief, with whom Alice must cooperate to untangle the conspiracy and prevent the devastating attack. 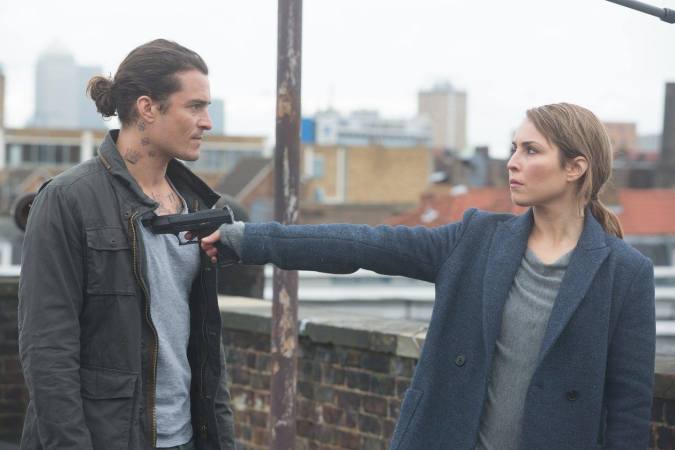 Unlocked is directed by veteran English filmmaker Michael Apted, who replaced the initially-hired Mikael Håfström. Apted is best known for the ground-breaking Up series of documentary films, as well as the 1999 Bond movie The World is Not Enough. Unlocked is a markedly less flashy, less ludicrous espionage thriller than Pierce Brosnan’s penultimate 007 outing was. That’s not to say it’s very good. Anyone who’s watched a few episodes of 24 will have an idea of what to expect from this competently executed but profoundly generic and somewhat dull action movie. 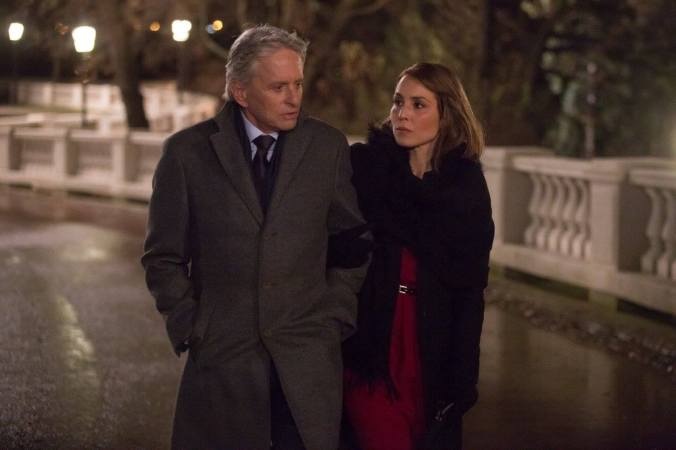 As if to compensate for doing nothing new, screenwriter Peter O’Brien throws multiple twists at the viewer, but these generate plot holes instead of excitement. Unlocked also falls back on what has now become a cliché – religious extremism as a red herring. We’re supposed to assume that Islamic radicals are the villains, when there are obviously shadowy forces at work merely making it appear that way. A scene in which an Imam explains why he would never incite violence is written and performed well enough, though. 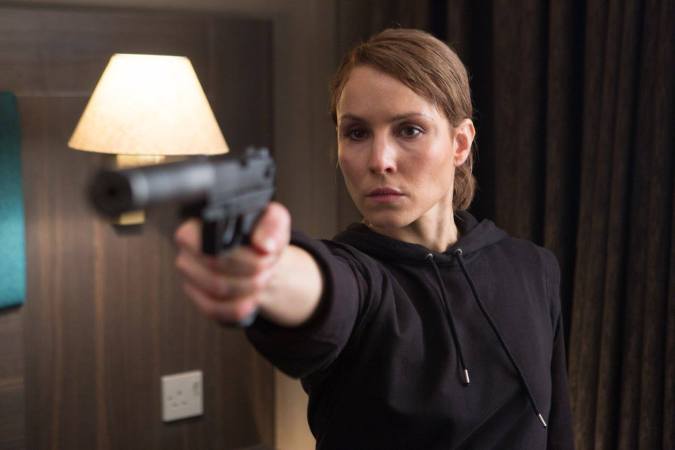 Rather like last year’s Criminal, Unlocked is a run-of-the-mill action thriller which has wrangled a top-shelf cast. Rapace makes for a fine action heroine, even if her back-story (rough childhood, problems with authority, haunted by a past failing) is typical stuff. 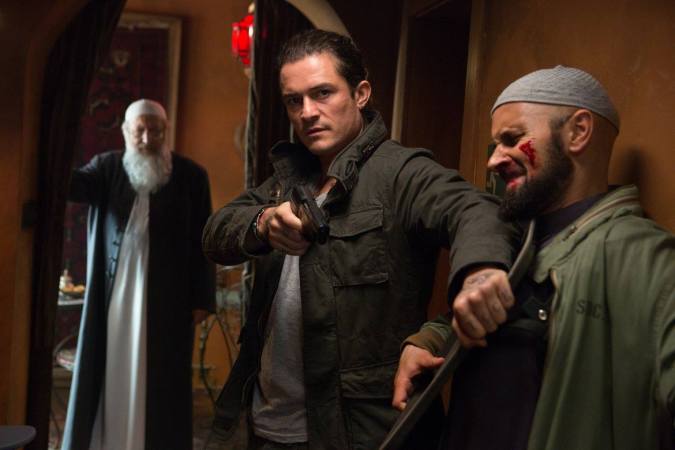 There isn’t nearly as much of Bloom in this as the poster implies. While his turn as a roguish rough-and-tumble type sporting scraggly hair, tattoos and an earring has its entertaining moments, it’s clear that Bloom is better suited to playing clean-cut characters. 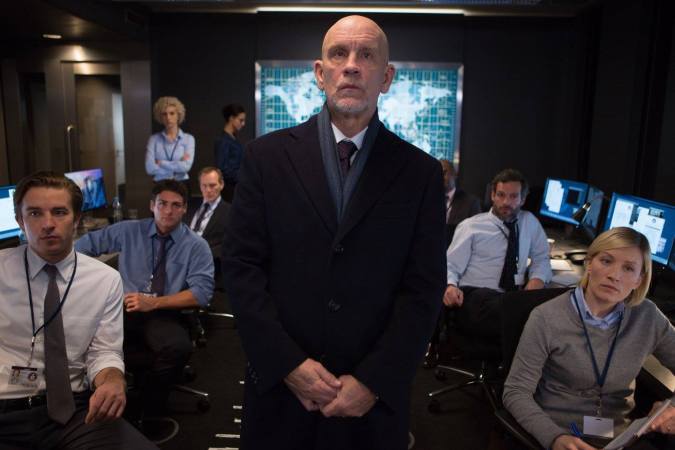 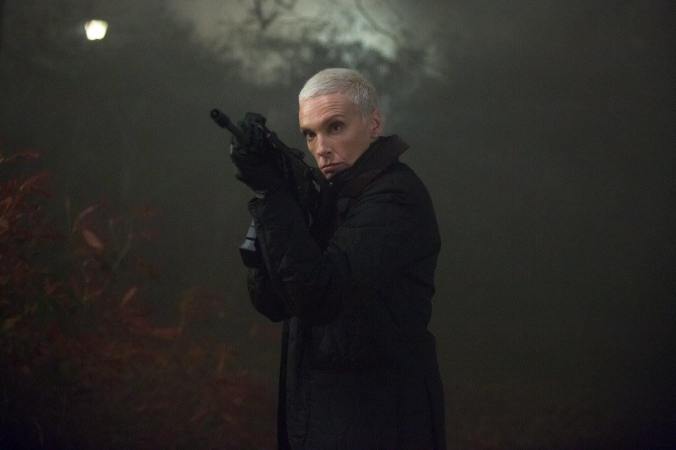 Stunt coordinator and second unit director Greg Powell, who has worked on the Bourne and Harry Potter series and several James Bond films, puts together fight scenes that look fine, but aren’t particularly impactful. Unlocked looks slick and its cast is packed with talent, but it’s clear that nobody’s heart was really in this. Unlocked isn’t a travesty, it’s just the kind of action movie that comes and goes without anyone really noticing.

Summary: A top-flight cast is mostly wasted in an action thriller made with competence but without passion.

Did that title catch your attention? It’s the only thing about this movie that will. This drama takes place in the underground realm of London’s high-priced escorts. Virginie’s (Herzi) family back in France believes she is working as an estate agent. In reality, she’s a sought-after prostitute working for Madame Raphäelle (Rocher). While partying with her friend Electre (Karamoh), Virginie meets a mysterious young man named Rupert (Stymest), who takes an interest in Virginie. While Virginie is initially dismissive of Rupert, she finds herself drawn to him, but is unsure of his motives. Virginie is tasked with showing new girl Sofia (Max) the ropes, but things go awry during Sofia’s first night on the job. Virginie, Sofia and Rupert go on the run, with the powerful men they’ve upset gaining on them.

Sex Doll’s original French title Amoureux Solitaires translates to ‘Lonley Lovers’. The film is written and directed by Sylvie Verheyde, who seems unsure of the kind of film’s she set out to make. From the premise of an erotic thriller set in the world of high class call girls, the film could go in one of two directions: a sobering, uncompromising, look at the realities of sex work, or an over-the-top exploitative fantasy. Sex Doll does neither, spending most of its running time meandering in limbo. It’s a film that has arthouse aspirations, but there’s little depth to be found beneath the endless parade of soft focus extreme closeups. While there is a lot of grunting, the sex scenes aren’t as graphic as one would expect – especially given that this a French film, and Fifty Shades of Grey was infamously passed with an “ages 12 and above” rating in France.

The film doesn’t work as a character study because the characters are so poorly defined and underdeveloped. While Herzi possesses sufficient elegance and poise to convincingly play a seductress, the character of Virginie isn’t especially fascinating. We suppose Verheyde was aiming for a sense of poetic irony in naming a prostitute “Virgin(ie)”, which is quite on the nose. Aspects of Virginie’s work that would make sense to explore, including how she climbed the ranks, how she maintains her relationships with her regular clients, and what’s at stake if she should run afoul of them, are barely examined.

Stymest is an English model whose lanky proportions give him what one might describe as “an interesting editorial look”. Unfortunately, he’s painfully stiff. The character is intended to seem aloof while hiding something beneath that façade, but Stymest merely comes off as bored.  Rocher doesn’t play up the stereotype of a stern, uncompromising madam, but has too little screen time and interaction with Herzi to make much of an impact.

For a film set in an environment rich with illicit thrills and tragedy, Sex Doll is a slow, passionless affair. Sex Doll doesn’t play enough with the ‘diary of a call girl’ formula, and is neither exciting nor, to be frank, all that sexy.

Summary: Fidget-inducing rather than provocative or alluring, Sex Doll is a dull portrait of a high-end prostitute’s life.