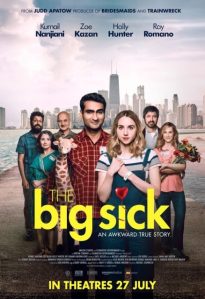 Many couples have probably thought to themselves, “say, our courtship would make a great movie”. Comedians Kumail Nanjiani and Emily V. Gordon thought this, and they were right.

In The Big Sick, Nanjiani plays himself, a Chicago-based stand-up comic from a Pakistani immigrant family. Kumail’s mother Sharmeen (Shroff) has been trying to arrange a marriage for him, setting him up with as many eligible Pakistani-American women as she can find. Emily Gardner (Kazan) is in the audience at a show in which Kumail is one of the performers, and they hit it off. However, Kumail knows that he will be disowned by his family if they find out he is dating a white, non-Muslim woman. Several weeks into their relationship, Emily is struck by a mysterious illness, and is placed in a medically-induced coma. Her parents Beth (Hunter) and Terry (Romano) arrive from North Carolina to care for her, and while things between them and Kumail are awkward at first, they begin to bond over their mutual care for Emily’s well-being. In the meantime, Kumail hopes to impress a talent scout who is selecting comics to perform in the esteemed Montreal Comedy Festival, but Emily’s circumstances throw him off his game, forcing him to re-evaluate his priorities while he confronts the traditions that he feels bound by.

This romantic comedy-drama is co-written by Nanjiani and Gordon, starring Nanjiani as himself, re-enacting his own love story. This might sound like a vanity project on the surface, but The Big Sick doesn’t feel like one at all. Even if it is a vanity project, it’s the kind we need right now. While made with a niche audience in mind, The Big Sick has gained overwhelmingly positive word-of-mouth and has become a critical and commercial success. Key to its success is that this a film that bleeds authenticity. Sure, as with any movie based on a true story, artistic licenses were taken, but at no point that this feel glossy and artificial, nor does the film seem like it’s straining to convince us of its realness. As cliché as it sounds, all of it comes from the heart. Profoundly moving and disarmingly raw, director Michael Showalter packages Nanjiani and Gordon’s shared experiences without them seeming packaged in any way.

This is a comedy first and foremost, and on that front The Big Sick is a gut-busting triumph. Little touches like Nanjiani’s abiding love for The X-Files add nice textural elements – the episode “One Breath”, in which Mulder tries to save Scully from a coma, was a major inspiration for this film. Stand-up comics like Bo Burnham and Aidy Bryant fill supporting roles as Kumail’s fellow comedy club performers, sometimes sarcastic but never unbearably smug. At no point does The Big Sick feel smug or ‘funnier than thou’, as movies about comedy with the creative involvement of professional comics are wont to be. Best of all, the tricky tonal balances are executed with a master’s touch. The film makes no hard-left turns into dramatic territory, and when it gets serious, it never blindsides the audience. The subjects of medical emergencies, the prejudices faced by South Asians and other immigrants in the United States, and the prospect of being exiled from one’s family because of whom one chooses to love are not inherently funny. The Big Sick’s treatment of these issues provokes thought without feeling inorganic or like it’s forcing the audience into an uncomfortable spot. The comedy does not undercut or overpower the film’s depth or sincerity. 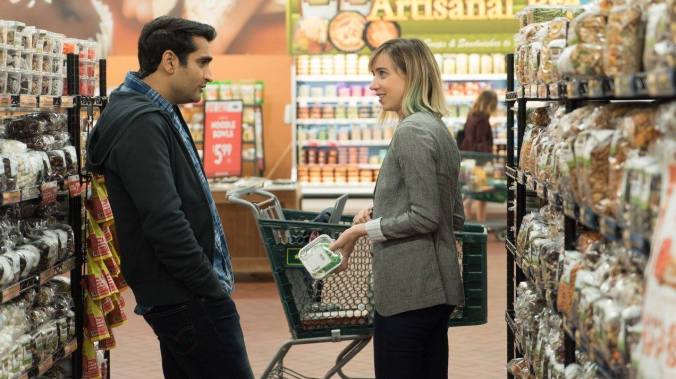 One could say that Kumail Nanjiani was the role Kumail Nanjiani was born to play. Nanjiani is earnestly dorky, yet charming and altogether endearing, without ever feeling like he’s over-amplifying aspects of himself. He shares sparkling chemistry with Kazan, who is eminently likeable and showcases a range of the most adorable facial expressions. There are conflicts and misunderstandings, but they never feel like stock rom-com contrivances. Emily is in a coma for most of the film’s running time, but Kazan makes her presence felt and the relationship between Kumail and Emily is one of the easiest to root for in all of romantic comedy film history.

Kumail’s family does feel a little exaggerated for comedic effect, but they are never the butt of the joke. Given all that Nanjiani has been through, the portrayal of Kumail’s father Azmat (Kher), mother Sharmeen, brother Naveed (Akhtar) and sister-in-law Fatima (Shenaz Treasury) is markedly sympathetic. Kumail might feel stifled by the traditions and worldview upheld by his family, but that doesn’t mean he loves them any less. 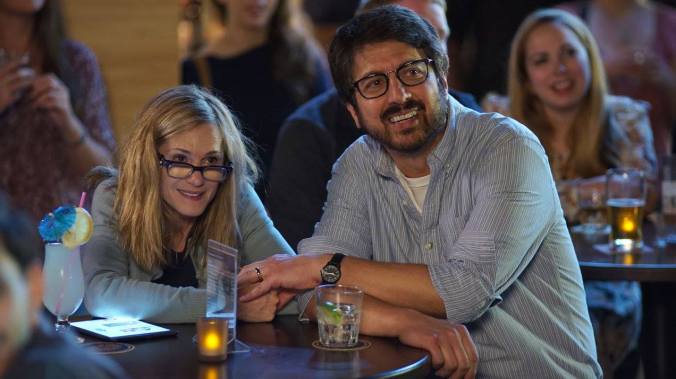 Romano and Hunter are impeccably cast as Emily’s parents. Romano brings his trademark slightly beleaguered, Dad joke-spouting everyman persona to bear, but also provides some of the film’s most honest emotion. Hunter’s fiery, no-nonsense Beth is a force to be reckoned with, and the way she eventually warms towards Kumail feels natural and earned. Having a daughter in a coma is an emotionally-exhausting experience, and Terry and Beth are shown warts and all – but then again, so is every character in The Big Sick, a key ingredient in its authenticity.

Summary: Deeply personal, authentic, warm, heart-rending and immensely funny, The Big Sick will cause fits of laughter and uncontrollable sobbing without feeling incongruous, manipulative or self-indulgent.