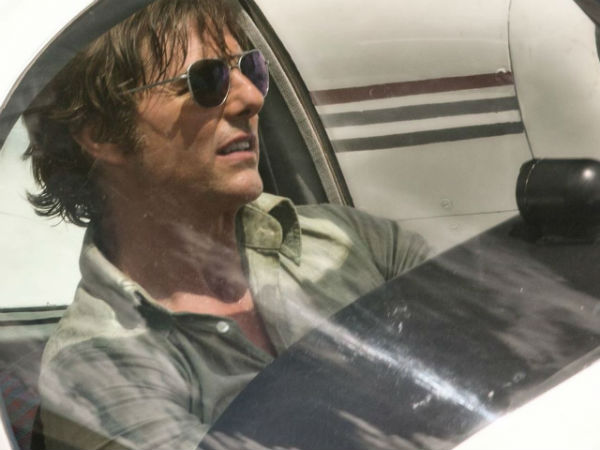 The story of pilot Barry Seal is one that’s stranger than fiction: Seal went from being a commercial pilot for TWA to becoming a drug courier for the Medellín Cartel, a gunrunner for the Contras and the CIA, and a DEA informant. In the biopic American Made, Seal is played by Tom Cruise, and it’s easy to believe that Cruise can smirk and wink his way out of any sticky situation. Seal makes various daring take-offs from remote Colombian jungles, the underbelly of his cocaine-laden plane scraping the tree tops. One of the film’s most memorable scenes features Seal crash-landing on a residential street after he’s pursued by the DEA, tumbling out of his plane covered in cocaine, handing a bundle of cash to a bewildered kid and escaping on said kid’s bicycle.

Cruise is a certified pilot in real life, and owns a collection of planes including a WWII-era P-51 Mustang. The actor has built a reputation for doing more of his own stunts than any insurance company would be comfortable with, and he pulled off yet another hair-raising feat in American Made. Not only did Cruise do some of his own flying in the film, he left the cockpit with no one else in the plane for scenes in which Seal had to dump cocaine out the back of the plane. Director Doug Liman, who was flying alongside Cruise in a helicopter shooting the scene, was both terrified and thrilled by the commitment displayed by his leading man. “It’s one thing to have Tom Cruise alone in the airplane flying it — that’s already outrageous — now he’s alone and he’s not even in the cockpit so he’s gone beyond,” Liman said. “It was already a stunt before he left the cockpit, it was already a serious stunt.”

Before you watch Cruise wing it in American Made, here are five other times he’s been in the pilot’s seat – or somewhere less safe – on a plane or other flying vehicle in his movie career. 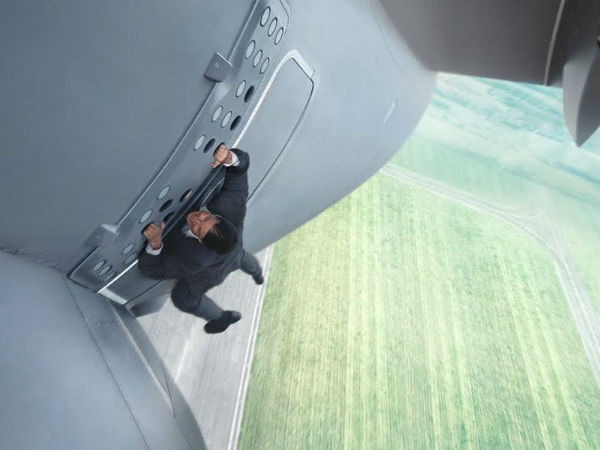 The Mission: Impossible movie franchise has become synonymous with crazy Cruise stunts. 2015’s Mission: Impossible – Rogue Nation opens with a death-defying feat: Cruise’s Ethan Hunt clings onto the exterior of an Airbus 400 as it takes off from a runway. This sequence became one of the film’s major selling points, featuring heavily in billboard and banner advertising. “There’s no digital Tom, and there’s no fake plane. He’s really strapped to an Airbus,” Director of Photography Robert Elswit declared. The stunt team did tests with a dummy, then with a stunt double, before letting Cruise do the stunt himself. Cruise was strapped into a harness that was wired to the plane through its door, and the runway was carefully cleared of rocks and other debris. “When he wants to do something, he’ll figure out a way to do it,” Elswit said of Cruise, describing him as “the most obsessive artist.” “If it couldn’t actually be Tom on the plane, I think he wouldn’t want the sequence in the movie,” Elswit remarked. 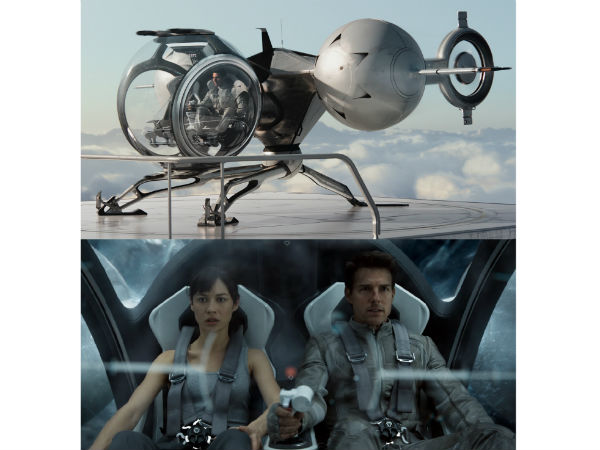 In the post-apocalyptic sci-fi thriller Oblivion, Cruise plays the last man on earth – or so he thinks. It is Jack Harper’s job to repair drones that are attacked by alien scavengers, or ‘scavs’, and he routinely patrols his sector in a gleaming high-tech craft called the Bubbleship. The craft resembles a dragonfly and is inspired by the Bell 47 helicopter. The film features a dogfight during which Jack is pursued in his Bubbleship by hostile drones, with the mysterious Julia Rusakova (Olga Kurylenko) seated beside him. Production designer Darren Gilford and his team built a life-sized Bubbleship. Cruise visited the crew in the workshop while they were constructing the Bubbleship, and had input on design elements like the foot pedals and controls, so operating the craft would look natural. “It’s so beautifully designed. Every piece of it was just smooth and elegant,” Cruise said. A cockpit-only version of the Bubbleship was built to be mounted on a gimbal, which would spin around against a bluescreen backdrop like a souped-up theme park ride. Being a pilot himself, Cruise had no problems with sitting in the rig, but his co-star Kurylenko had never been in a gimbal and was nervous about it. “Olga will tell you today she wasn’t scared. She was scared,” Cruise quipped.

“The Bubbleship is a beautiful creation when it’s just standing on the ground, but you don’t want to be in there when it’s flipping around!” Kurylenko said. “In the end I liked it, I have to admit. But don’t tell anyone, I pretended like I didn’t,” she laughed. 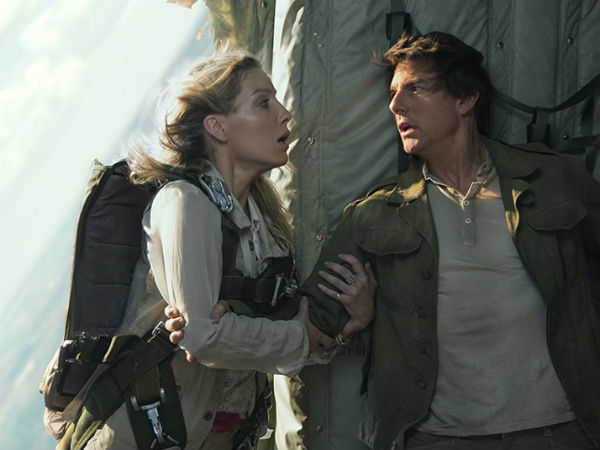 Universal Studios’ revival of its classic movie monsters in ‘cinematic universe’ form, the Dark Universe, got off to a rocky start with The Mummy. Industry watchers speculated that the film’s failure was due at least in part to Cruise’s “excessive control” over the production. Cruise reportedly personally commissioned screenwriters to fashion the project into more of a star vehicle for himself, reducing the screen time of the titular character, Sofia Boutella’s Ahmanet. The film features a big Mission: Impossible-style stunt: the crash of a military transport plane carrying Ahmanet’s sarcophagus. The production hired a zero-gravity plane from the French space agency NoveSpace, converting its interior to resemble a military transport plane. The plane would fly in parabolic arcs, resulting in brief periods of weightlessness. Cruise, co-star Annabelle Wallis and the crew all floated in zero-G to capture the scene. “We had to prepare as best we could, but then we don’t quite know exactly what’s going to happen,” Cruise said. “We wanted it to be wild and violent and spontaneous for an audience,” he explained. “They’re just seeing it happening in real time. There’s no edit, it’s there.”

Cruise first collaborated with his American Made director Liman on the sci-fi action flick Edge of Tomorrow, based on Hiroshi Sakurazaka’s light novel All You Need is Kill. A loving ode to military science fiction mainstays such as Starship Troopers and Aliens with a Groundhog Day time loop folded in, Edge of Tomorrow features futuristic weapons and gadgets, including powered mech suits and Quadcopters. The Quadcopters are the conveyance from which troops are deployed onto the battlefield, and resemble the Bell Boeing Quad TiltRotor. “[Production designer] Oliver Scholl came up with this great idea of this dropship, this futuristic aircraft where the soldiers in their exo-suits would be locked in like human ordnance, and they just drop you,” Liman explained. “That seemed so terrifying and would be a really great thing for Tom Cruise’s character to have to experience.”

Being suspended from the rack inside the Quadcopter might not have been the most dangerous stunt Cruise had ever executed, but it wasn’t necessarily pleasant. “Being inside that dropship, we’re like canned tuna, basically,” Cruise recalled. “I have to say, those days we’re all in there, as actors you’re just hanging in an uncomfortable way for many, many hours.” 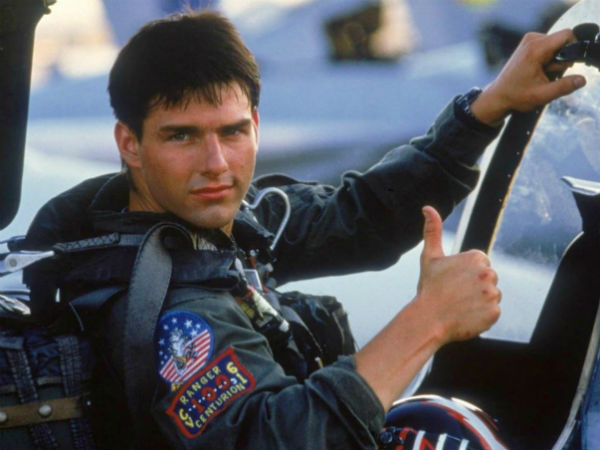 Playing a pilot launched Cruise to superstardom, and 1986’s Top Gun remains one of his best-known films. Most of us might regard the film as 80s kitsch, but in 2015, the United States Library of Congress selected it for preservation in the National Film Registry. The film was inspired by an article in California magazine about the U.S. Navy Fighter Weapons school, colloquially known as ‘Top Gun’. Mega-producers Jerry Bruckheimer and Don Simpson hired the late director Tony Scott on the basis of his commercial for Saab, which featured a fighter jet. Bruckheimer and Simpson pursued Cruise for the lead role of Pete “Maverick” Mitchell, but Cruise wouldn’t commit even as he received updated drafts of the script. Bruckheimer arranged for Cruise to take a flight with the U.S. Navy’s famous Blue Angels aerobatics team, in the hopes that this would convince Cruise to accept the role. Cruise had just finished filming Ridley Scott’s Legend and still had a long ponytail, so the pilots thought he was a hippie and figured they’d have some fun by flying Cruise upside-down and at three to four G Forces. Cruise was unfazed, and Bruckheimer’s gambit paid off – Cruise hopped off the plane, went to the nearest phone booth and called Bruckheimer to say he was in. The long-awaited sequel is finally coming to fruition – Top Gun: Maverick is due in 2019, reuniting Cruise with Oblivion director Joseph Kosinski.