Jennifer Lawrence gets in touch with her maternal side – and an infernal side – in this psychological horror film from Darren Aronofsky. Lawrence’s character, the otherwise-unnamed Mother, is the wife of an author, the otherwise-unnamed Him (Bardem). Mother and Him have moved into a remote house, which Mother is attempting to fix up while Him struggles with writer’s block. Out of the blue, the couple is visited by an Orthopaedic surgeon, Man (Harris), and Man’s wife Woman (Pfeiffer). Man professes to be a fan of Him’s writing, and Him appreciates the attention, but Mother becomes wary of their new guests. This opens the gateway to more surprise visits, as Mother and Him grapple with issues within their marriage that are made manifest by the strangers who have come to their house.

Mother! is a film that is difficult to review because the filmmakers want us to know as little about it as possible. The marketing has had to be creative, because it’s such a challenging film to sell – a deejay friend of this reviewer’s received an actual pig’s heart in a box as a gift from the movie’s distributor. This is very much an arthouse film, and audiences going to see it because of Jennifer Lawrence will be thrown for a loop. Mother! is packed with potent imagery and thought-provoking ideas, but it feels like a film that was made with the intent to alienate the audience. Aronofsky does a fine job of establishing mounting dread, and there is a pervasive uneasiness to the affair, but because Mother! is so mannered and arch, there’s a barrier separating the viewer from the movie. This makes it difficult to get into, and no matter how intense and visceral the movie becomes, it engenders a certain detachedness.

As with many arthouse films, there is plenty to pick apart and muse over, and there are several themes that root the movie. Mother! reflects the power to create and to destroy inherent in every person. Mother! touches upon the culture of celebrity worship, and how cult-like it can become. Mother! is about the relationship between artists and their audience. Mother! is about the anxiety of, well, motherhood, the joy and hardships of bringing another human being into the world. Mother! is about how women can be side-lined, about how wives are sometimes forced to alter their lives to orbit around their husbands. One could write a paper, nay, several papers about Mother!, but perhaps a film should be more than something to dissect.

There’s a purity to Lawrence’s presence in this film, and she emanates an almost ethereal radiance. This is different from other projects she’s undertaken, clearly pushing the actress outside her comfort zone. While the character seems to be victimised for most of the film, she does bring a quiet strength to the role. Audiences know Bardem is capable of being creepy, and to his credit, he doesn’t come across as overtly evil – but we’re plenty suspicious of him all the same. Lawrence and Bardem are mismatched, but that seems to be the point, with the age gap between them being repeatedly pointed out by other characters.

The story is focused tightly on the dynamic between Mother and Him, but the supporting players do make an impact. Pfeiffer is especially fun to watch as someone who’s passive-aggressive and calculative, but outwardly pleasant. Of all the performers, Pfeiffer appears to be having the most fun. There is a certain Saturday Night Live who shows up later in the film – if you don’t who this is yet, it’s a fun surprise, but also comes off as deliberately gimmicky. 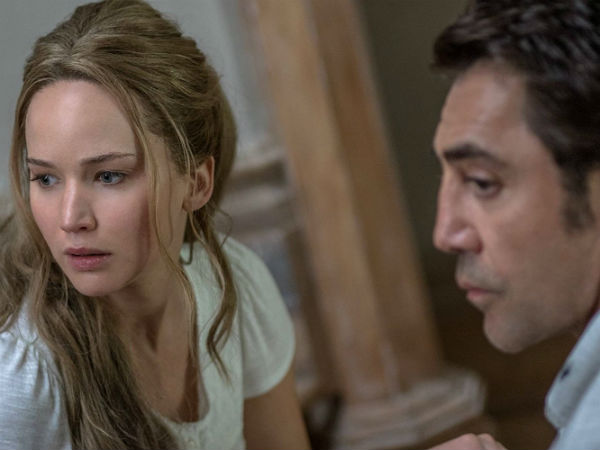 Mother! has attracted its share of controversy – you might have seen headlines online along the lines of “Mother! could be the most hated film of 2017” or “Has Darren Aronofsky gone too far?” After a near-excruciating slow burn, Mother! does build to a chaotic, gory frenzy. There are moments of raw, searing power here, and it is immensely thought-provoking. However, because of how much attention the film draws to its own construction, and how desperately it seems to want to be seen as a piece of art, Mother! is more a bubbled-over cauldron of allegory and metaphor than an absorbing story.