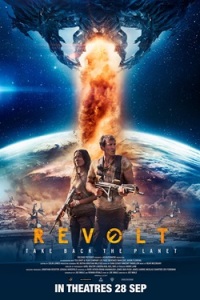 In Guardians of the Galaxy, Lee Pace played the marauding alien warlord Ronan the Accuser. In this film, the tables are turned, and Pace instead plays a soldier defending earth from alien invaders. Pace’s character awakes in a Kenyan jail cell with amnesia – he is referred to as ‘Bo’ because those two letters are written on his sleeve. In the cell next to Bo’s is Nadia (Marlohe), a French medic whose family died when Paris was decimated by the aliens. Bo and Nadia fend off not only vicious extra-terrestrial forces, but also hostile warlords, poachers and mercenaries. The pair makes their way to Nairobi to rendezvous with a group of rebel soldiers, making a desperate last stand for humanity.

Revolt is directed by Joe Miale, from a screenplay by Miale and Rowan Athale. The Dutch production draws inspiration from numerous military science fiction films. Grimy, bloody and often chaotic, Revolt has the aesthetic sensibilities of something like District 9 or Battle: Los Angeles. The war-ravaged African landscape is convincing, and the visual effects by Automatik VFX are excellent for the budget. The design of the aliens themselves is interesting: they’re skeletal and mechanical, and not overly humanoid, but interesting to look at and sufficiently, well, alien.

The main problem with Revolt is just how generic it all is. Many clichés associated with the war movie and sci-fi genres are present and accounted for, right down to the mysterious amnesia-stricken hero. The film is not intended to look gorgeous or polished, but even at a lean 87 minutes, its visual monotony makes it feel like a bit of a slog. This is to say nothing of the fact that the film is set in Kenya and the heroes are white, with the vast majority of the black characters being straight-up evil and vicious.

The biggest novelty factor that Revolt possesses is that Pace is playing a traditional square-jawed action hero role. Pace acquits himself well, and it’s not unlike Adrien Brody bulking up to fight aliens in the jungle in Predators. There are moments when Pace seems out of his element, for the most part, he’s believably tough and even under duress is quite charming.

Marlohe, who was recently seen in Kill Switch, seems to be seeking out low-mid-budget science fiction films. Her line delivery is somewhat stilted, but it’s easy to buy her as someone who can handle herself competently in a combat situation. While it initially seems like an interesting back-and-forth might develop between Bo and Naomi, it does not, and the poorly-developed relationship between the two characters feels like another big missed opportunity.

This reviewer enjoys seeking out smaller-scale sci-fi action films because it can be fun watching filmmakers problem-solve their way around limited resources, while delivering the spectacle associated with the genre. There’s some joy to be derived from Revolt where that is concerned, but the film is overwhelmingly, almost aggressively generic. We would recommend it to all the Lee Pace fangirls out there, though.