THE SOUND OF MUSIC

7 November to 2 December 2017 at the MasterCard Theatres in Marina Bay Sands, Singapore 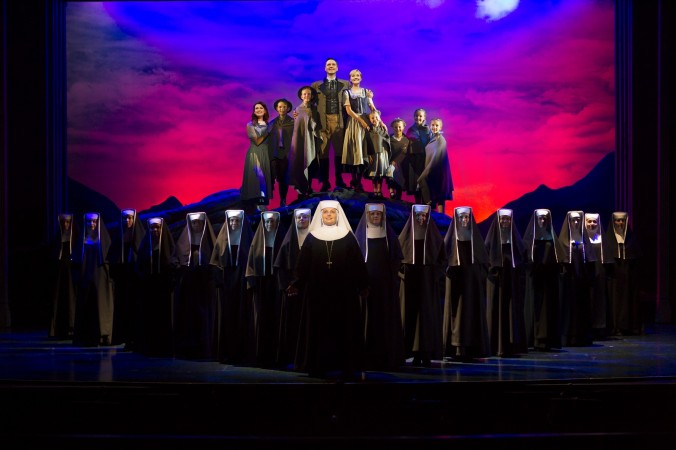 It’s a musical theatre staple that has resonated across the decades: The Sound of Music returns to the MasterCard Theatres at Marina Bay Sands in Singapore, having last played here in 2014. With its memorable songs, heart-warming romance, adorable children and themes of standing up for one’s principles, it’s no surprise that the show has staying power.

The Sound of Music is a fictionalisation of The Trapp Family Singers, the autobiography of the real-life Maria von Trapp. With music by Richard Rodgers, lyrics by Oscar Hammerstein and a libretto by Howard Lindsay and Russel Crouse, the musical debuted in 1959. The Sound of Music skyrocketed into the public consciousness with a blockbuster film adaptation released in 1965. Directed by Robert Wise and starring Julie Andrews and Christopher Plummer, the film won five Academy Awards.

It is 1938, and young Maria (Carmen Pretorius), who is studying to be a nun at Nonnberg Abbey, is sent to be a governess to the seven children of Naval Captain Georg Von Trapp (Nicholas Maude). The Captain has become distant to his children after the death of his wife, and implements strict discipline in the household. Maria baulks at this, and decides to teach the children music.

While the Captain is initially resistant to Maria’s methods, they eventually warm to each other and romance blossoms. However, the Captain is about to marry the wealthy Elsa Schraeder (Haylea Heyns). When the Captain and Elsa’s mutual friend Max Detweiler (Jonathan Taylor) hears the children sing, he is impressed and enters the family of singers into the upcoming Salzburg music festival. With the impending annexation of Austria by the Third Reich, the Captain receives an offer to join the Navy in Berlin. The family must make a stand and escape the Nazis before it’s too late. 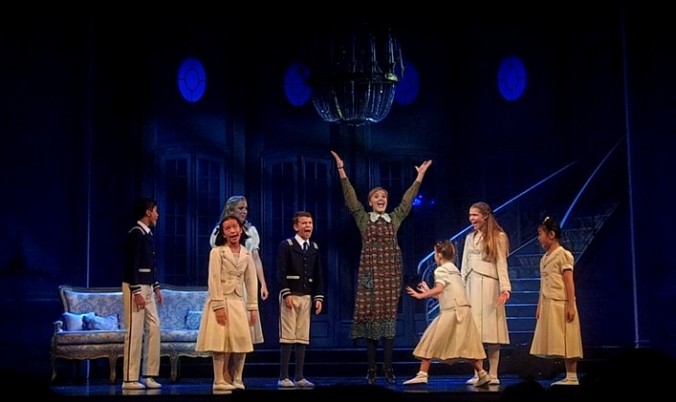 With the widespread adoration it’s received, The Sound of Music has also garnered its share of criticism. The show is typically decried and treacly and overly-sentimental, and makes large deviations from the true story. As Agathe (the real-life analogue of Liesl), the oldest Von Trapp daughter put it, “It’s a very nice story but it’s not our story. If they hadn’t used our name I probably would have enjoyed it.”

That said, the show’s charm is irresistible, and anyone who’s a fan of the film should experience it live. There’s something quaint about its old-fashioned nature, and yet the staging is anything but stodgy and dull. This production was originally staged at the London Palladium in 2006, and is co-produced by Andrew Lloyd Webber.

Under the baton of musical director Kevin Kraak, the orchestra sounds marvellous, achieving the illusion that the ensemble is far larger than it is. This production uses the original orchestration by Robert Russell Bennett from the 1959 show.

The set and costume designs by Rob Jones are sumptuous, and the stage seamlessly transforms from Nonnberg Alley with its arched hallways into the stately Von Trapp mansion with its grand staircase and chandelier. Mark Henderson’s lighting design is naturalistic, but gently heightened in a painterly way when required. The thunderstorm sequence is especially realistic. The choreography by Arlene Phillips of Strictly Come Dancing fame is playfully dynamic without being overly busy. 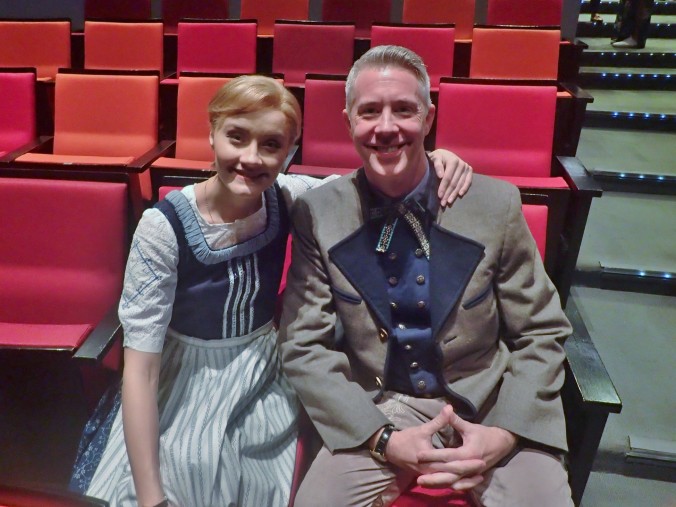 Pretorius is a sprightly, energetic Maria, effectively conveying the free-spirited liveliness that is one of the character’s defining traits. When the production last came to Singapore, she played the oldest daughter Liesl. The South African actress’ vocal inflection seems patterned after Julie Andrews, but does not come off as mimicry. There’s a pleasant lightness and subtle strength to her voice, and there is precision to her movements which doesn’t sacrifice the feeling of spontaneity. She makes for a Maria who is eminently loveable and easy to root for.

Maude is dashing and refined as the Captain. This is role that’s all too easy to play as overly stiff, but Maude’s interpretation of the role is anything but. The warmth beneath the stern exterior is readily visible, and his rendition of “Edelweiss” is appropriately tender. 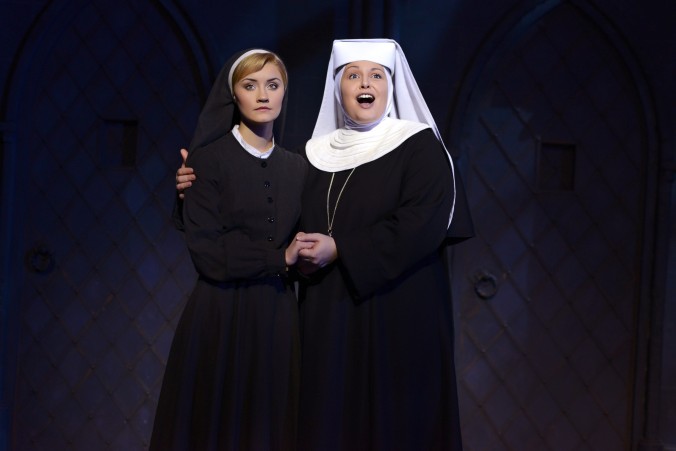 Janelle Visagie previously played the Mother Abbess when the show ran here in 2014, and proves to be a perfect match for the role. She imbues “Climb Ev’ry Mountain” with the ideal balance of solemnness and inspirational uplift, and her soaring performance of that number, which closes out Act 1, is a highlight of the show.

The six younger Von Trapp children are played by locally-based actors who were cast via an audition held in May. 18 children share the six roles. The young performers are impressive, and are no doubt a big draw for audiences. It’s hard to pick a favourite, but this reviewer is especially fond of Max Makatsaria as Kurt. Emily Kitamura is cute as a button as the youngest child, Gretl. In our performance, Friedrich was played by Louis Beatty, Louisa by Samantha Lee, Brigitta by Sasha Suhandinata and Marta by Chloe Schueler. 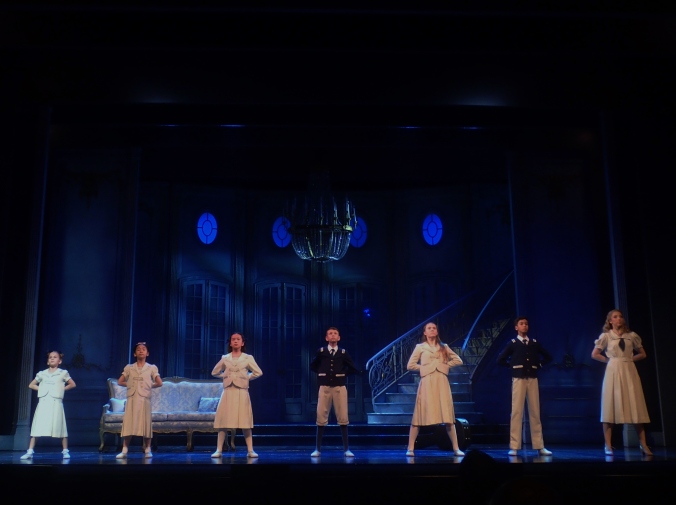 The one casting choice that didn’t quite work for this reviewer was Zoe Beavon as Liesl. It might seem like a superficial complaint, but Beavon is significantly taller than Pretorius, and appears older than Michael McMeeking, who plays Liesl’s boyfriend Rolf. She isn’t as believable as a 16-year-old as the child actors are playing the corresponding ages of the other Von Trapp kids. This ordinarily wouldn’t be too big of an issue, but the song “Sixteen Going on Seventeen” does call attention to it.

Jonathan Taylor and Haylea Heyns inhabit the roles of Max Detweiler and Baroness Schareder splendidly. These supporting characters are easy to play too broadly, and they keep their performances the right level of comedic.

There’s nary a dull moment in the show and it feels much shorter than its running time, but the story also feels rushed. Everything moves so quickly, and the relationship between Maria and the Captain doesn’t get much room to breathe. The Von Trapp children also go from being indifferent towards to Maria to absolutely adoring her in a matter of minutes. The show downplays the politics, and as such it is somewhat jarring when Swastika-emblazoned banners are unfurled, and Nazi Stormtroopers are standing onstage.

Those attached to the film version should just be prepared that since the movie made some changes from the stage show, some songs appear at different places that one would be familiar with: “My Favourite Things” is a duet between the Mother Abbess and Maria before she leaves the abbey, and “The Lonely Goatherd” is sung during the thunderstorm. “How Can Love Survive” and “No Way to Stop It” were excised from the film, and show up here. “Something Good”, which in the film replaced “An Ordinary Couple”, remains.

The Sound of Music has become an easy target for cynics, but for those of us whose hearts haven’t calcified into a blackened, angry mass, there’s plenty here to enjoy. With strong lead performances and plenty of talent on display from locally-based kids, the performances complement the well-appointed set. The timeless music continues to be stirring and powerful, and as one leaves the theatre, one might feel a twinge of sadness that it’s time to say “so long, farewell”. 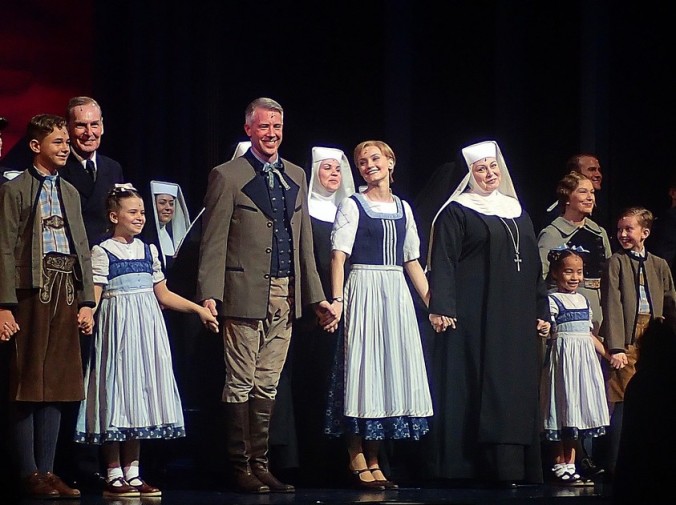 The Sound of Music is an Andrew Lloyd Webber, David Ian and The Really Useful Group production, presented by Lunchbox Theatrical Productions, BASE Entertainment Asia, Sliding Doors Entertainment and David Atkins Enterprises. The show runs from 7 November to 2 December 2017 at the MasterCard Theatres in Marina Bay Sands, Sinapore. Ticket prices start from $65 (excluding the $4 booking fee per ticket). Visit www.MarinaBaySands.com/ticketing or www.sistic.com.sg to purchase tickets.

One thought on “Musical Review: The Sound of Music (2017, Singapore)”