Every awards season, we get at least a few inspirational sports biopics about resilient athletes who overcome insurmountable odds, becoming heroes to people everywhere.

I, Tonya is not that movie.

Tonya Harding (Margot Robbie) was the first U.S. female figure skater to pull off the extremely tricky triple axel move. If you were around during the 90s, you might have a vague recollection of the rivalry between Tonya and fellow Olympic skater Nancy Kerrigan (Caitlin Carver). This culminated in Harding’s ex-husband Jeff Gillooly (Sebastian Stan) and Jeff’s friend Shawn Eckhardt (Paul Walter Hauser) planning an attack against Nancy. After a hired hand breaks Nancy’s knee with a retractable baton, it isn’t long before suspicion falls on Tonya and Jeff.

The film follows the lead-up to and aftermath of this incident. Tonya’s mother LaVona Fay Golden (Allison Janney) mercilessly pushes her daughter, and Tonya’s life revolves around abusive relationships. Facing numerous setbacks and eventually cast as a villain by the media, Tonya pursues her dream of being the #1 figure skater in the world.

I, Tonya is an acerbic subversion of your bog-standard awards bait sports biopic. It’s sometimes unpleasant, and intentionally so. Director Craig Gillespie, who previously helmed the more traditional sports movie Million Dollar Arm, takes a black comedy approach to Tonya Harding’s life story. He directs from a screenplay by Steven Rogers – this is easily the Love the Coopers screenwriter’s edgiest work. 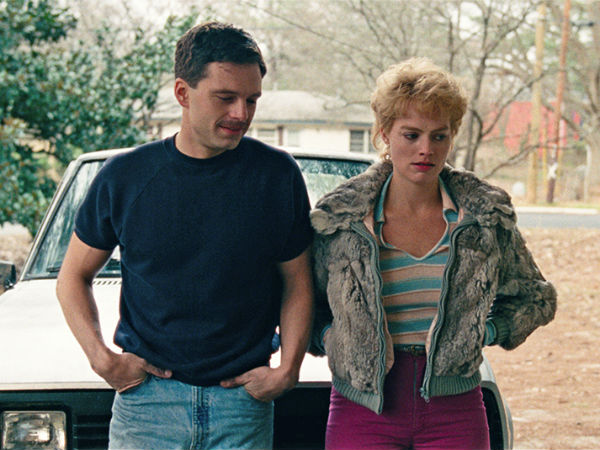 Tonally, I, Tonya is tricky. It wants the audience to laugh at the ‘white trash’ characters that populate the story, while also empathising with them. It wants to be cynical and snarky, yet sincere. There are moments when the cracks begin to show, but given the ambitiousness of this juggling of moods, I, Tonya works far better than it might have in different hands.

The film is framed with interview sequences in which the characters, a gallery of unreliable narrators, speak directly to camera. Outside these interview scenes, we also get fourth wall breaks. Everything is caustic, everyone is varying degrees of broken, and yet, it’s funny. The ice skating sequences are also absolutely mesmerising and thrilling, pinpricks of gracefulness in the blackness of awful people being awful.

Robbie, who is also the co-producer through her Lucky Chap Productions label, holds this all together. She throws every ounce of herself into a performance that is impossible to look away from and which has deservedly netted her an Oscar nomination. Piercing through the public perception of Tonya, Robbie paints the portrait of someone who has been knocked about her whole life, Tonya’s unsportsmanlike behaviour and overall demeanour a result of that. Robbie is flashy, sincere, wild and showcases impressive physicality, under the tutelage of coach Sarah Kawahara. This is the ‘sink-your-teeth-into-it’ role actors live for, and Robbie makes quite the meal of it.

Even with that highly unflattering moustache, Stan is still quite loveable. The Jeff character isn’t meant to be – he’s a dope, and he’s abusive, but is he malicious? Is he even smart enough to be capable of malice? The relationship between Tonya and Jeff rivals that of Harley Quinn and the Joker in the ‘toxic and unhealthy’ stakes. The film’s depiction of domestic abuse is harrowing, but doesn’t quite fit in with the devil-may-care glibness established earlier.

Janney handily steals the show as the abrasive, cruel, yet oddly endearing LaVona. Janney undergoes a complete transformation, and while we’ve seen the cigarette-smoking stage mom archetype before, she unearths several layers to the character. LaVona’s abusiveness towards Tonya contributes to Tonya’s acceptance of Jeff’s abuse after they are married. Janney is hotly tipped to take home the Best Supporting Actress Oscar for this performance.

The film also works to dispel the myth that parents who push their children past their breaking point in the pursuit of excellence are helping their children, and that’s what their children need. LaVona thinks that Tonya performs best when she is enraged, so she engineers situations to throw her child off balance – it’s psychological abuse.

As Tonya’s long-suffering coach Diane Rawlinson, Julianne Nicholson is the sole source of purity, comfort and level-headedness in this sea of scuzziness. Her presence offers a respite from the overwhelming unpleasantness of everything else.

Paul Walter Hauser has a good deal of fun with the role of Shawn, the schlubby friend with delusions of grandeur who ‘masterminds’ a criminal plot with consequences far beyond what Jeff or Tonya could have imagined. This section of the movie plays a bit like a Coen Brothers caper, with bumbling characters who are not very good at being up to no good.

I, Tonya is challenging in that it leaves the audience laughing but uncomfortable as they’re doing so. The film is sympathetic to its title character, but also leans into the tabloid perception of her as it attempts to dig beyond that surface. Mostly, I, Tonya is a terrific showcase for Margot Robbie’s increasingly stunning talents as a leading lady.