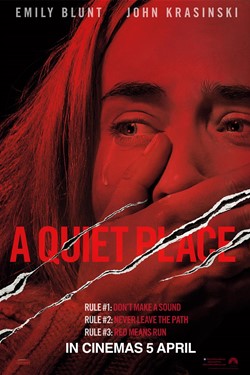 In this horror thriller, silence is not only golden, but it’s the one thing that will keep what remains of humanity alive.

Vicious creatures that hunt by hearing have wiped out much of the earth’s population. The Abbott family, consisting of Lee (John Krasinski), his wife Evelyn (Emily Blunt) and their children Regan (Millicent Simmonds), Marcus (Noah Jupe) and Beau (Cade Woodward), are among the few people that remain. Living in a farmhouse, they have adopted a life of silence, as any sound they make could be their last. Grappling with loss and fear, the family that stays quiet together survives together. 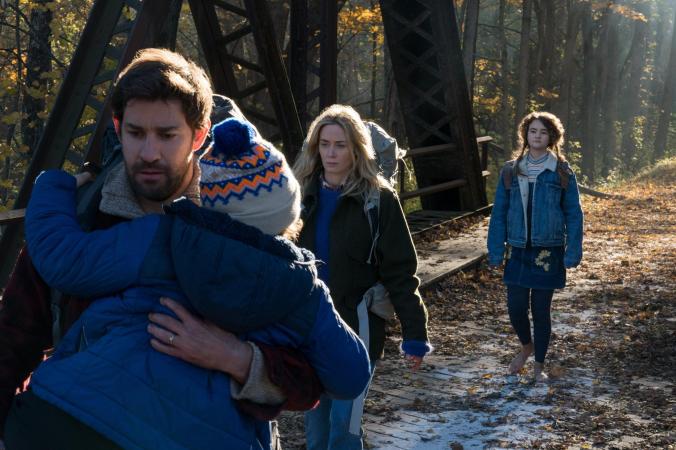 A Quiet Place is directed by John Krasinski, who also rewrote a spec script by Bryan Woods and Scott Beck. Krasinski’s previous directorial efforts Brief Interviews with Hideous Men and The Hollars were indie comedy-dramas, the kind of films you’d expect from an actor making his foray into directing. With A Quiet Place, Krasinski boldly steps into genre territory with a film that seems like the work of a seasoned horror filmmaker. 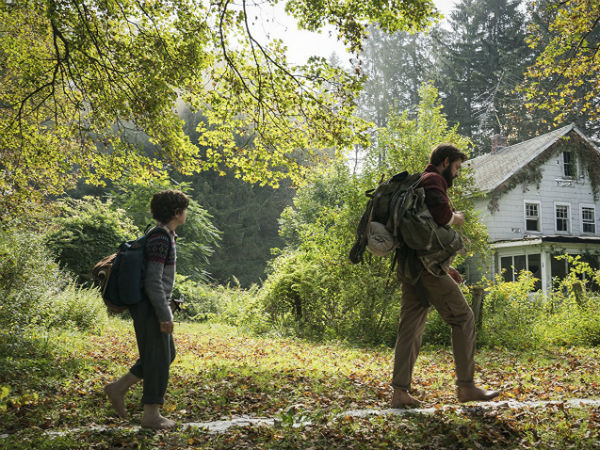 Krasinski wastes no time in reeling the audience into the world he creates, and once the movie gets a hold of us, it never lets go. The set-up is elegant, and the movie doesn’t get bogged down with too much exposition. The threat is firmly established, and we get to know the characters and the world they’re living in without it ever feeling boring. There is minimal gore, rendering the little explicit blood and violence that we see even more effective.

The set pieces are simple but staged with great finesse, and the sense of dread is all-encompassing. The grain silo scene is a nail-biter of the highest order. The film falls back on more than a few jump scares, but these are earned because of the effort with which the world is drawn, and because the premise justifies them.

Charlotte Bruus Christensen’s cinematography conveys the family’s melancholy, and the manipulation of light and shadow during the creature attack sequences is right up there with the similar scenes from Alien. A film like this lives or dies by the sound design, which is executed meticulously and ramps up the tension.

Beyond the atmospherics, A Quiet Place does something many horror films struggle with: it makes the audience care deeply about its characters. We get invested in the plight of this family and want to see them make it through their ordeal. The cast is small, the scope is intimate, and while we’re curious as to what happened to the rest of the world, our focus is trained on the Abbotts.

All the performances are affecting, and the film benefits from real-life husband and wife Krasinski and Blunt playing off each other. The couple visibly draws on their own experiences as parents to portray people who go to great lengths to protect their children. At no point does this seem self-indulgent, even with Krasinski starring, directing and co-writing. Both Krasinski and Blunt convey great warmth and sadness. While there are moments when the characters are deathly afraid, these performances don’t feel like what one would typically find in a horror film, further elevating the material. Blunt in a farmhouse toting a shotgun also brings Looper to mind, and Looper coming to mind is rarely a bad thing.

Millicent Simmonds is outstanding as Regan. The character has agency and her personal frustrations, regret and tension with her parents are given considerable attention. Simmonds is deaf in real life and lends the film great authenticity. Krasinski stated that he cast Simmonds so she could teach the cast what it’s like to live in a silent world. Most of the ‘dialogue’ in the film is delivered via American Sign Language, which Simmonds taught the cast.

Jupe’s Marcus is sensitive and frightened – his father is gently trying to teach him the survival skills he needs. The interaction between the parents and their children is thoroughly convincing, and this helps immensely in selling the premise.

While rival horror-centric studio Blumhouse has critically acclaimed successes like Get Out, Platinum Dunes, founded by Michael Bay, Andrew Form and Brad Fuller, has been mostly pumping out poorly-received remakes of classic horror franchises. Ouija: The Origin of Evil was the closest a Platinum Dunes horror movie came to be excellent. A Quiet Place is the studio’s finest offering yet.

As hard as it would’ve been to believe ten years ago, Jim from The Office has made one of the finest suspense horror movies in recent memory. Krasinski demonstrates precise control and heart, giving the film a sense of novelty as he makes it into so much more than just its gimmick.