The Rock gets acquainted with glass and steel in this action thriller set in – you guessed it – a skyscraper.

Dwayne Johnson plays Will Sawyer, a former FBI Hostage Rescue Team leader who lost his leg during a mission gone wrong, and who now works as a building security assessor. Will’s family, including his wife Sarah (Neve Campbell) and twins Georgia (McKenna Roberts) and Henry (Noah Cottrell), are flown out to Hong Kong for his new assignment. The upper floors of the tallest building in the world, the Pearl, are about to open for business, pending Will’s assessment. The Pearl stands almost 1.07 km tall, dwarfing Dubai’s Burj Khalifa. Will and his family are the guests of the Pearl’s billionaire owner, Zhao Long Ji (Chin Han), and they are the building’s first residents.

Naturally, things don’t go according to plan. Will finds himself on the run from the authorities as the building is broken into and set on fire. A team of dangerous mercenaries led by Kores Botha (Roland Møller) has infiltrated the Pearl and disabled its security and fire safety systems. Sarah, Georgia and Henry are trapped in the building, and Will must get to them before it’s too late. Botha will stop at nothing at nothing to get what he wants from Zhao, and a man who wants to save his family it’s all that’s standing in his way.

This summer movie season, Skyscraper is the only major tentpole studio release that is not a sequel. That said, it is the furthest thing from original possible – not to belabour the point, but this movie might as well be called ‘I Can’t Believe It’s Not Die Hard’. There already exists a Die Hard knockoff named Skyscraper, starring the late Anna-Nicole Smith.

Skyscraper feels out of place amidst the giant franchise entries that have dominated and will continue to dominate the box office this summer, but that is key to its charm. It feels like a movie straight out of the 90s in a very welcome way. That’s due in part to the well-worn premise, but also to its star being the closest thing we have to the larger-than-life action heroes of the 80s and 90s.

This reviewer did not enjoy director Rawson Marshall Thurber’s previous Johnson-starring film, the buddy comedy Central Intelligence. As such, it’s surprising just how well Skyscraper is directed. The script, also written by Thurber, seems to have been reconstituted from a “just add water” action movie premix. However, the film moves with great finesse and Thurber leads audiences from one edge-of-your-seat action set-piece straight on to the next, generating breathless thrills despite the overwhelming silliness of the whole affair. Veteran production designer Jim Bissell gets to show off with the gleaming futurism of the Pearl – there’s even a high tech maze of mirrors of sorts. 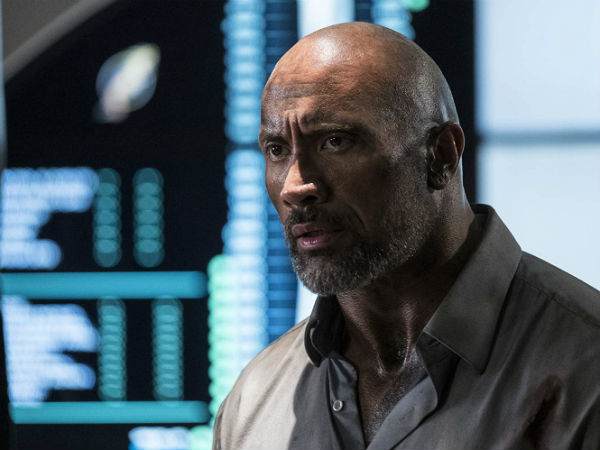 What’s left to say about Johnson’s abilities as a leading man that hasn’t already been covered in countless other reviews? He’s not quite an everyman the way Bruce Willis’s John McClane started out, but he’s still got that disarming charm – Will quips about the magical properties of duct tape while stuck in the middle of a crisis. Will performs spectacular feats of implausibility, one after the other. The leap from a crane to the building has already been lampooned ever since it was made a central feature of the poster and has become a meme unto itself. Part of the joy of Skyscraper is accepting the ludicrousness and focusing on Johnson at the centre of said ludicrousness.

The script struggles to make Campbell’s Sarah more than the ‘designated wife’ so often seen in these movies, and mostly succeeds. Sarah is a Navy combat medic and can hold her own in some harrowing situations. There is a nigh-excessive degree of imperilling children in the film, but hey, these kids have the Rock as their dad. That’s a guarantee it’s going to work out all right.

Chin Han’s Zhao is perhaps a touch egotistical – you must be to build the tallest building in the world – and just might be hiding something. It’s the standard ‘rich guy you’re meant to suspect’ archetype and he does seem to enjoy strutting across the well-appointed penthouse set.

This movie’s villains were shipped in straight from Movie Bad Guys “R” Us. There are Euro-mercenaries sporting a variety of accents, led by Møller’s Kores Botha (what a great villain name). Then there are a bunch of local hires too, since this takes place in Hong Kong, including Hannah Quinlivan as a lethal leather-clad henchwoman. It’s all, to use that word again, quite ridiculous – but it’s never not entertaining.

Skyscraper genuinely reminds this reviewer of the action movies he enjoyed growing up. Sure, it’s stupid, but it’s hard to go too wrong with Johnson leading the charge. Surprisingly, it leans into its genre-ness more than Rampage, also starring Johnson, did earlier this year. As a Die Hard-style movie that could’ve easily gone straight-to-DVD but instead has a $125 million budget and stars the Rock, it works.