In 2013, Discovery Channel aired Megalodon: The Monster Shark Lives as part of its Shark Week line-up. The pseudo-documentary was presented as fact, and the number of people who were initially convinced showed that at least some of us secretly want to believe that somewhere in the depths lurks a Carcharocles megalodon.

In The Meg, Jason Statham faces off with the deadly living fossil. Statham plays former rescue diver Jonas Taylor, whose claims of witnessing a sea monster attacking a nuclear submarine went disbelieved. Five years after that incident, Jonas is called on by his friend Mac (Cliff Curtis), who works aboard the research facility Mana One.

An expedition sent by the Mana One is in danger – the three-person crew of the submersible Origin are trapped 11 000 metres below the surface, threatened by a giant ancient shark. This confirms Jonas’ story, and he reluctantly undertakes the mission. Among the trapped are his ex-wife Lori (Jessica McNamee). Suyin (Li Bingbing), daughter of Dr Minway Zhang (Winston Chao), insists she can conduct the rescue herself. Meanwhile, billionaire Jack Morris (Rainn Wilson) worries that the emergence of the Megalodon could jeopardise his expensive investment. As the Meg rises from the depths to threaten swimmers at the beach resort hotspot Sanya in Hainan, China, Jonas and the Mana One crew must stop the Meg’s reign of terror.

The Meg is based on Steve Alten’s best-selling 1997 novel Meg, and a film has been in various stages of development since the book was published. There’s an unavoidable amount of stupidity inherent in the material – after all, there is no shortage of cheaply-made TV movies with similar premises. If you’re in need of a laugh, look up clips of 2002’s Shark Attack 3: Megalodon, starring a hapless John Barrowman.

The Meg is like one of those movies with an exponentially larger budget, and there is some pleasure to be derived from that. Several sequences are impressively staged, and the visual effects work is generally strong. Director Jon Turteltaub attempts to keep things largely tongue-in-cheek, while also going for genuine thrills and stakes. He is only fitfully successful – the film begins feeling like it might take things somewhat seriously, then dives headlong into the ludicrous as it reaches its conclusion. 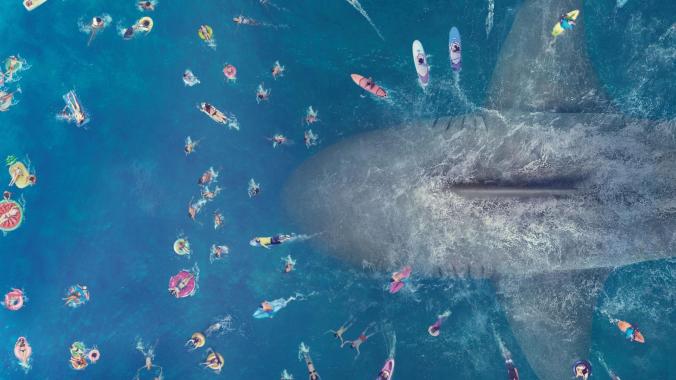 The film has high production values and boasts behind-the-scenes talent like Lord of the Rings production designer Grant Major and Clint Eastwood’s regular cinematographer Tom Stern. To raise the estimated $150 million budget, the film must pander to Chinese audiences, and pander it does. It’s hard to discern how much of the silliness is intentional, and how much is a by-product of tailoring the film to the (perceived) tastes of international filmgoers.

Statham plays the lead role, an indistinct roguish action hero trying to outswim a tragic incident in his past. Turteltaub noted that this is a Jason Statham movie without the requisite gunfights and car chases, and on that level, he technically is doing something different. Statham has just enough leading man charm for audiences to kinda-sorta go along with the sheer ridiculousness, at least for the first act or so.

Statham is not particularly known for his acting chops and is regularly out-acted by the leading ladies in his films. Luckily for him, that is not the case here. Li Bingbing is uniformly stiff throughout the film, unable to carry any of the emotional moments or the action beats. While Winston Chao fares a little better as her character’s father, the would-be moving scenes between the father-daughter duo fall extremely flat. 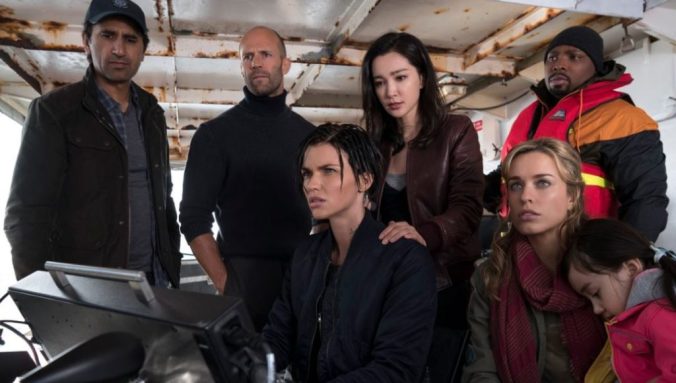 The film’s supporting characters are all thinly-drawn stock types, as one would expect from a movie of this genre. Ruby Rose plays a cool Ruby Rose-type, Rainn Wilson plays a Rainn Wilson-type (but rich), you get the idea. Page Kennedy is meant to provide comic relief, but not many of the jokes land.

Sophia Cai plays Meiying, Suyin’s daughter. She’s a precocious moppet who cracks wise and is meant to activate everyone’s protective instincts, but the character is written and acted in a largely annoying manner. Despite the film’s best efforts, imperilling Meiying won’t draw too much of a reaction from the audience, because it’s hard to care about most of the characters here.

The Meg’s CGI shark may be technically impressive, and we appreciate that the visual effects supervisor on a movie set in the ocean is named ‘Adrian De Wet’, but when it comes down to it, the titular beast is rarely convincing. There are sequences that generate a passable level of tension, but there are only so many times the movie can riff on the “barrels dragged across the surface” gag seen in Jaws.

There’s a degree of “you know what you’re getting” with The Meg: yes, it was always going to be silly, but how effectively the film leans into that silliness is up for debate. The Meg is paced briskly enough and serves up several entertaining sequences, but compared to some of this summer’s sharper, more satisfying offerings, there’s more bark than bite.