TEEN TITANS GO! TO THE MOVIES

Superhero movie saturation has become such a commonplace topic that there now exists a superhero movie specifically about that phenomenon. In Teen Titans Go! To the Movies, the titular DC team of junior superheroes is feeling left out – it seems that everyone, even the obscure likes of the Challengers of the Unknown, is getting their own movie.

This hits Robin (Scott Menville) particularly hard, because his guardian Batman (Jimmy Kimmel) seems to get movie after movie, while he is left in the shadows. Robin’s teammates Beast Boy (Greg Cipes), Starfire (Hynden Walch), Cyborg (Khary Payton) and Raven (Tara Strong) try to cheer him up, but to no avail. Robin lobbies film director Jade Wilson (Kristen Bell) to make a movie about him.

Deciding that what the team needs is an arch-nemesis to make a compelling movie, the Teen Titans take on Slade (Will Arnett), a dastardly mercenary looking to steal a powerful crystal. In their quest for justice/a movie deal, the Titans run into a variety of other heroes, including Superman (Nicolas Cage), Wonder Woman (Halsey), Green Lantern (Lil Yachty) and The Flash (Wil Wheaton).

This is a roundabout way of saying that the backlash to Teen Titans Go! mostly stems from a rejection of ‘childishness’ – quite cleverly, this is one of the themes in Teen Titans Go! To the Movies. In the film, the Teen Titans are dismissed by the other heroes because they can’t take anything seriously. This is a very silly film about just how silly superhero movies can be. On the surface, it’s all pratfalls, toilet humour and incongruous song and dance numbers. Beneath that, this movie delights in a playful meta deconstruction of superhero movies and their conventions, without losing sight of its primary audience. 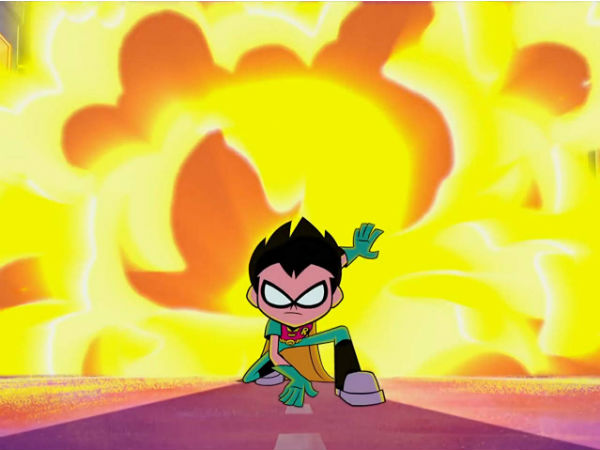 The popular public conception of DC media as being darker than that of rival Marvel, sometimes to a self-conscious extent, gets a lot of play. We wish that directors Peter Rida Michall and Aaron Horvath could’ve seen bits of the upcoming live-action TV series Titans, which appears to fundamentally misunderstand the source material, just so the Teen Titans Go! version of Robin could mutter “fudge Batman”. Alas, we must make do with yet another Martha joke.

There’s a Catch-22 here: on the one hand, the detail-light and deliberately cartoony animation style of Teen Titans Go! doesn’t work particularly well on the big screen, especially when compared to the richness and technical wizardry of something like The LEGO Batman Movie. On the other hand, this being a theatrically-released movie is integral to the central premise of the Teen Titans going in search of their own movie.

The central voice cast from Teen Titans Go! and the original Teen Titans series returns, with several celebrities joining them. While notable-ish names from the music world Halsey and Lil Yachty don’t contribute too much, getting Nicolas Cage to voice Superman is a bit of a casting coup. Cage was attached to play Superman in Tim Burton’s Superman Lives, a film which didn’t come to fruition and is now legend among comic book movie fans.

Will Arnett, who voiced Batman in The LEGO Movie and The LEGO Batman Movie, voices Slade, and just like everyone else involved, sounds like he’s having the greatest time. There are several cameos which will elicit a chuckle or two.

Fans of comics and related media are often afraid of being perceived as childish, because of the long-held stigma that people who read comics or collect toys are socially mal-adjusted. While that appears to be changing, there’s still a fear of embracing silliness within the genre, which has led to overcompensating with ‘grimdark’ takes on the source material. Teen Titans Go! To the Movies examines this in a surprisingly nimble way. This reviewer still isn’t sure that it works amazingly on the big screen, especially in a summer which has given us Incredibles 2, but if you’re willing to let loose for a bit and not take yourself too seriously, Teen Titans Go! To the Movies is worth a look.

Stick around for a stinger after the main-on-end titles.