Crazy Rich Asians, the film adaptation of Kevin Kwan’s 2013 novel of the same name, has arrived on the big screen. There are many hopes pinned on this film, which has generated its share of controversy and backlash from its earliest stages of development. Let’s head to sunny Singapore and break all this down.

The film centres on Rachel Chu (Constance Wu), a Chinese-American economics professor at NYU who has found the love of her life: the dashing Nicholas Young (Henry Golding). Nick is heading back home to Singapore for the wedding of his best friend Colin (Chris Pang) to his fiancé Araminta (Sonoya Mizuno). Nick suggests that Rachel come along and meet the family. What could possibly go wrong?

What Nick’s been hiding from Rachel all this time is that he is the heir to the wealthiest family in Singapore. Naturally, Rachel earns the ire and extreme jealousy of all the eligible society bachelorettes who thought they stood a chance with Nick. Rachel faces the condescension and rejection of Nick’s mother Eleanor (Michelle Yeoh). Rachel seems attacked on all sides, getting way in over her head. In her corner is her college friend Peik Lin (Awkwafina), who hails from a wealthy Singaporean family too. Rachel also has her loving mother Kerry (Tan Kheng Hua), who immigrated to the U.S. from China, supporting her. Rachel navigates the treacherous waters of Singaporean high society, as she faces questions of identity, self-worth, and whether Nick is worth all this trouble.

On the surface, Crazy Rich Asians is a frothy romantic comedy of manners. It’s a fish out of water story and is naturally being sold on its depictions of decadence, opulence, indulgence, and other things ending in -ence. There’s a lot more to Crazy Rich Asians than first appears – the story means to examine status, the true value of material wealth, the classification of people as ‘outsiders’ or ‘insiders’ – themes that have been explored before, but not in the context of Singapore’s sphere of affluence in a major Hollywood studio film. 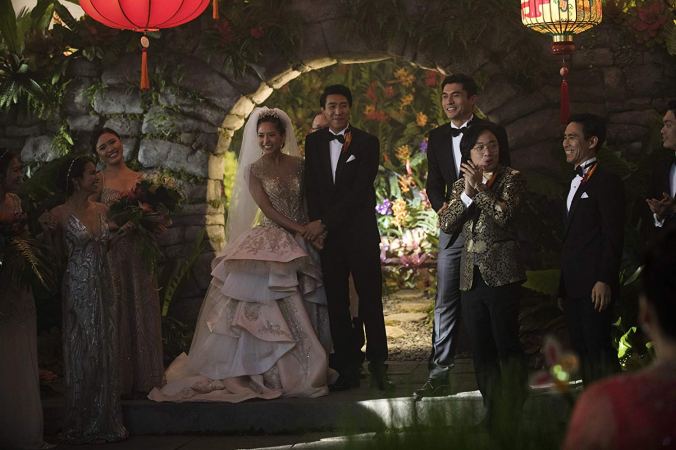 This is a film that will mean different things to different people – it’s important to note that the film’s protagonist is Chinese-American, and we see things from her perspective. The questions of her identity are framed by her encountering her boyfriend’s Singaporean family. The film has been decried by several Singaporeans for being an inaccurate portrayal of the island nation. Ethnic minorities like Malays and Indians are nowhere to be found, and nearly everyone speaks in posh English or brash New York-ish accents.

This reviewer would argue that Crazy Rich Asians does not have a responsibility to depict all of Singapore, nor should it be taken as a film about Singapore. Its focus on a tiny slice of Singapore society may come across as narrow, but the circumstances specified by the story justify this depiction. This reviewer would love to see Singapore depicted in all its facets in a Hollywood film – that’s not the goal of Crazy Rich Asians, nor does it mean to be, but the frustration at a skewed version of Singapore being presented for consumption worldwide is understandable.

Crazy Rich Asians falls victim somewhat to ‘have your cake and eat it too’ syndrome. This is going to be a weird example but bear with us: the 2009 sci-fi action film Gamer wanted to be an indictment of the mass-consumption of overly violent, crass media, while being an example of the very thing it is attempting to satirise. Crazy Rich Asians does this for the lifestyles of the uber-wealthy. We’re meant to question the ultimate intangible worth of having a lot of stuff and having every whim catered to, just as we’re meant to gaze upon tableaus of ridiculous luxury with voyeuristic pleasure. There is an undeniable novelty factor, however slight, at the thought that audiences in Des Moines, Iowa might walk into the multiplex and see Newton Hawker Centre and Gardens by the Bay on the big screen.

Director Jon M. Chu, who has a background in dance movies, stages the proceedings with visual panache to spare. As with any adaptation of a novel, things are whittled down, and there’s a lot of plot to get through. The movie barrels along like a freight train – there’s nary a dull moment, but there isn’t enough room for the story to breathe. Better that than things being boring, we figure.

This is a soap opera, and there are altogether too many characters to keep track of, but the film trains its focus on Rachel. Fresh Off the Boat star Constance Wu makes for an intelligent, lively, likeable and vulnerable lead. The scenes in which she matches wits with Michelle Yeoh’s Eleanor are a hoot, and a scene she shares with her mother, played by Tan Kheng Hua, brought this reviewer to tears.

Much ink has been spilled about Golding’s mixed heritage. It’s hard to talk about this without sounding like characters in Harry Potter throwing around phrases like “pureblood” and “half-blood”, so we won’t. He’s handsome and earnest and just bland enough in the way male leads in modern rom-coms often are. Nick is a decent person, while most of the people in his social circle aren’t, making us root for Rachel and Nick to end up together. 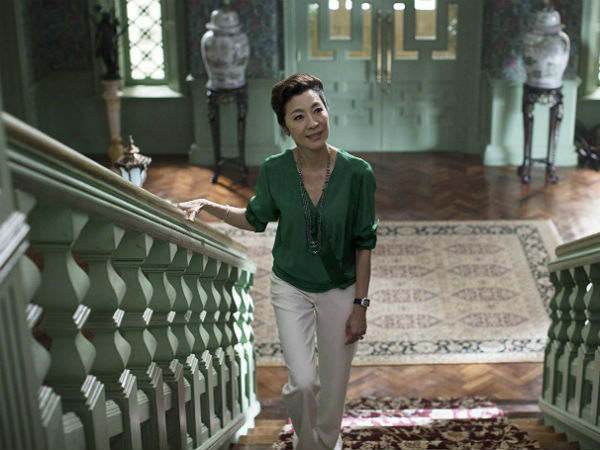 Michelle Yeoh gives the stock type of the glowering prospective mother-in-law just enough depth, and Eleanor articulates exactly why she’s so wary of Rachel. Yeoh’s performance is a savvy one, lending the proceedings gravitas. There’s a sly bit of commentary in seeing Eleanor lead a Bible study group comprised of her rich friends – the implication is that these are people who prize material gain over all else hiding behind the veneer of religious virtue.

The rest of the cast is comprised of a lot of attractive people doing attractive people things, and sometimes they can blend together a little. The camera lingers on Pierre Png’s bare torso as he exits the shower, and much is made of how physically beautiful the characters played by Gemma Chan and Sonoya Mizuno are. There are also many characters who are outwardly attractive but are awful on the inside. 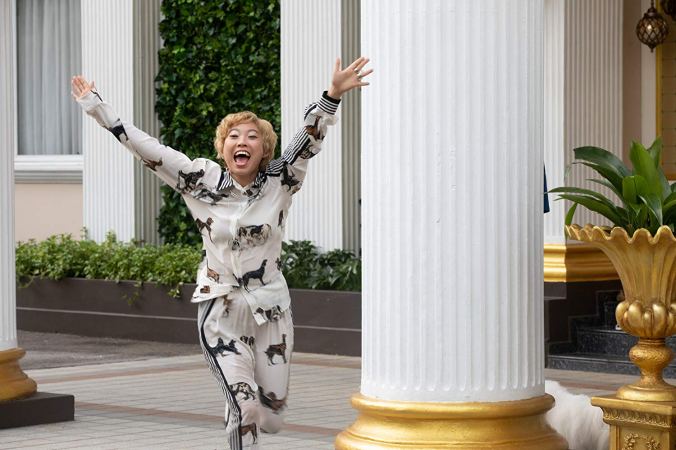 Peik Lin and her family stand out by design – they’re outlandish, brash, and they’re rich but not pretentious. Awkwafina is utterly enjoyable, delivering a giddily infectious performance. Ken Jeong and Koh Chieng Mun are plenty of fun as Peik Lin’s parents. Nico Santos hams it up as Oliver, who calls himself the ‘rainbow sheep’ of the family. Oliver does fall a little too neatly into the ‘gay best friend’ role, but Santos gives the character welcome personality.

There are times when Crazy Rich Asians is a touch too ridiculous for its own good – there’s an Apocalypse Now homage (think helicopters and “Ride of the Valkyries”) that seems a little too on the nose. However, there are others when performers showcase excellent comic timing, and the film hits a pleasantly silly pitch.