October 31, 2018: the night he came home again. It has been 40 years since the events of the original Halloween film, and masked serial killer Michael Myers (Nick Castle, James Jude Courtney) has been safely locked away under the watchful eye of prison psychiatrist Dr Ranbir Sartain (Haluk Bilginer). True crime podcasters Aaron Korey (Jefferson Hall) and Dana Haines (Rhian Rees) plan on interviewing both Michael and the survivor of his murderous rampage, Laurie Strode (Jamie Lee Curtis).

Laurie has spent the last four decades in constant fear and paranoia of Michael’s return. This has put a strain on her relationship with her daughter Karen (Judy Greer), who is married to Ray (Toby Huss) and has a daughter of her own, Allyson (Andi Matichak). When Michael escapes and returns to his old stomping grounds of Haddonfield on Halloween night, Laurie’s worst fears are realised. Even though Laurie has prepared to face Michael again, there’s no telling what terrors will unfold with Michael back on the loose.

The Halloween franchise has a storied, messy past. John Carpenter’s 1978 original is considered one of the finest horror films ever made, and kickstarted a wave of slasher movies in the 80s. Through multiple instalments, the Halloween films tended to lose sight of what made the first one so good. This movie ignores all the sequels, functioning as if it were only the second film in the series. This has been done before: Halloween H20: 20 Years Later ignored the films after Halloween II.

Any franchise that’s been around as long as Halloween has, especially a horror franchise, will eventually find itself wading into silliness. What once was terrifying devolves into self-parody, and eventually martial arts fights with Busta Rhymes ensue. Director/co-writer David Gordon Green and co-writers Jeff Fradley and Danny McBride strip Halloween back to basics in a satisfying, terrifying entry that stays true to the spirit of the original while having a propulsive energy of its own.

Green nails the sense of foreboding, the fear of what might be lurking around every corner, in every doorway and corridor, that is a key factor in establishing the nail-biting tension a good Halloween movie must possess. John Carpenter returns to the score the film alongside son Cody and Daniel Davies; the iconic Halloween theme remaining one of the best pieces of film music ever written. Cinematographer Michael Simmonds employs light and shadow to dramatic effect, while Tim Alverson’s editing ratchets up the tension that much more. This looks and feels like Halloween, but there’s an urgency to this movie and it doesn’t come off as an artefact or a hollow exercise in nostalgia.

In revisiting the Laurie Strode role in Halloween H20, Curtis wanted to explore the effects that the trauma of Laurie’s run-in with Michael would have. She gets to dig even deeper here, and Laurie in this movie is essentially Sarah Connor, a woman who has dedicated her entire existence to preparing for Michael’s return, at the expense of her interpersonal relationships. The film’s depiction of post-traumatic stress disorder is compelling and heart-rending, and Curtis doesn’t phone this in at all. It’s a Halloween sequel worthy of the character, and a lot of the film is about Laurie’s arduous personal quest to reclaim what Michael stole from her. There’s also the implication that in fighting a monster, Laurie has become something of a monster herself, with some shots mirroring ones from the original film, but with Laurie and Michael swapping places.

While many Halloween fans might bemoan Danielle Harris’ absence from the film, and how Laurie’s daughter from Halloween 4 has been overwritten by a different character, Greer puts in a great performance. She’s disarming and naturally funny, but Karen is hurt and, in her own way, traumatised by what her mother has put her through – Greer conveys this ably.

Matichak might well be a breakout star after this film. Allyson is a believable teenager but never annoying, and it’s interesting to see what traits she might have inherited from her grandmother. The film is at its best when grandmother, daughter and granddaughter play off each other. This is a film about legacy and an entry in a franchise with a legacy all its own, so the device of Michael tormenting multiple generations is a potent one.

Castle returns as Michael, sharing the role with stunt performer James Jude Courtney. This is Michael as horror fans remember him, and just like in the original Halloween, some of the most terrifying moments are Michael just lurking in the corner, standing still. There are several exceedingly brutal kills, but the gore never takes precedence over the sense of dread.

Bilginer’s performance is a little broader than some of the others, but it works, since he’s playing a man whose obsession with serial killers has perhaps spilled over from being purely professional. 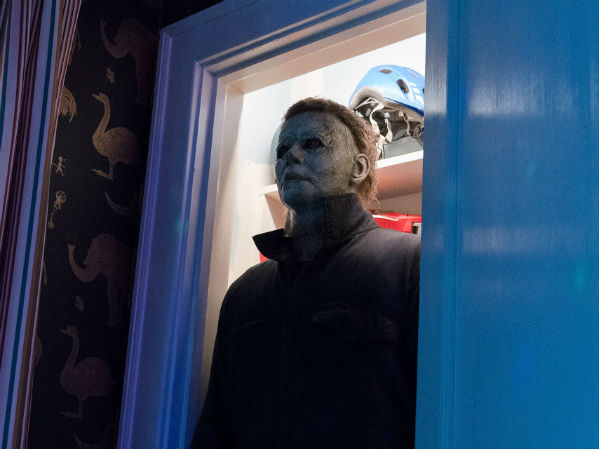 2018 is the year in which Jim from The Office directed and starred in one of the finest suspense horror movies in recent memory, A Quiet Place. Now, 2018 can also lay claim to being the year in which the team behind Pineapple Express, Your Highness and Eastbound & Down brought the Halloween franchise back to life in a big way. Now just don’t muck it up with further sequels.