YOU UNDEAD, I UNDEAD, EVERYBODY UNDEAD

This Halloween, in addition to the usual Hollywood offerings, moviegoers have a local option: Zombiepura. The film, directed and co-written by Jacen Tan, imagines the chaos that would unfold if a zombie virus outbreak struck a Singaporean army camp. Alaric Tay (now going by the mononym ‘Alaric’) and Benjamin Heng star as Kayu Tan and Lee Siao On respectively – the former is a slacker corporal, while the latter is a fired-up sergeant, both serving their reservist.

Tan, Alaric and Heng were joined by co-stars Joeypink Lai and Chen Xiuhuan to speak to the press about the film, which was seven years in the making. Zombiepura was first announced in 2011 and has taken a while to come to fruition. The production faced myriad challenges in getting the film to the big screen, with the movie’s budget estimated at around $900 000.

“I had this naïve idea back in the early days that I would just make a zombie film and just get all my friends to come [to act in it],” Tan admitted. He added that as he got serious about making the movie, he “I learned that it involved a lot of makeup, skills and craft”. Tan also said he had to learn to write the movie within the budgetary constraints the production faced.

While pop culture overall seems to be inundated with hordes of the living dead in every medium, Zombiepura purports to be the first Singaporean zombie film. Setting the film in a reservist camp appears to be a sly way to equate the bored way in which servicemen go about their duties with the mindlessness of your average zombie.

“The characters that I write are based on people you know during national service,” Tan revealed, drawing on the broad archetypes one might encounter in any given platoon. “To put them in a movie fighting zombies where s*** happens…that was why I was interested in the movie. Something really happens. In the army, it’s just exercises,” Tan said. 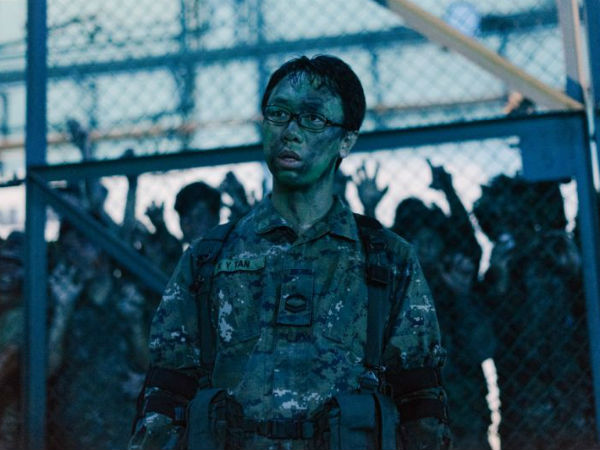 Star Alaric, known for his many roles in the satirical TV comedy The Noose and for appearances in series like Serangoon Road and Sent for HBO Asia, spoke about the zombie media he is a fan of. “I’m more of a Walking Dead fan. And of course, 28 Days Later. I only watched the first one, I didn’t watch the sequel,” he said – look out for a nod to the Danny Boyle film in Zombiepura. “I love I Am Legend, the Will Smith one, not the very old one,” Alaric added.

Benjamin Heng said he grew up watching jiang si or Chinese zombie movies and was introduced to zombie movies like Shaun of the Dead and Zombieland by Tan. Tan cited George A. Romero’s Night of the Living Dead, often considered the first true zombie movie, as his favourite entry in the subgenre.

Lai was a contestant in the New Paper New Face beauty pageant in 2015 and became a finalist in Miss Singapore Universe in 2016. She is also a realtor. “I think before that, regarding the character, like how I want her to walk, present herself and things like that, I did watch quite a lot of films regarding character of this kind of style. And then inspired, and then roll into one that I think would suit Xiao Ling,” Lai said of her process in playing the Xiao Ling character. She acknowledged the challenge of filming emotional scenes, saying “It’s the first time that I have to cry on screen…my vibe is always very outgoing and very cheerful.”

Chen Xiuhuan, no stranger to audiences of Chinese-language television series on MediaCorp Channel 8, plays Susie, Xiao Ling’s mother and a canteen stall operator at the army camp where the breakout occurs. “I actually don’t believe that zombie[s] exist,” Chen said. She revealed that producer Lim Teck, managing director of film distribution and production company Clover Films, convinced her to sign on to Zombiepura. “Lim Teck called me and said ‘this is something that’s very different from what you’ve always acted, you always look pretty, so why not take up the challenge?’”

The film’s action sequences are overseen by veteran stunt coordinator Sunny Pang. Alaric said he enjoyed working with Pang, explaining “As an actor, you always want to feel prepared getting on the set…working with Sunny and his team was definitely very helpful. It gave me a lot of confidence.”

Heng said he was very proud of Pang, having gotten to know Pang when he was an extra. “To have his own team, they were so hardworking, stressing the safety as well,” Heng said of the Ronin Action Group led by Pang.

Director Tan called the stunt performers and extras “the real stars of the film”. Tan credited them with working long hours wearing cloudy contact lenses and prosthetic special effects makeup, saying “they really held the film together.” Tan declared of the stunt players, “it is actually a world-class team that is as good as [one you’d find] anywhere.”

Tan praised actor Rayve Zen who plays Chua, one of the antagonists in the film. Tan called Zen “a great actor ready to burst on the scene”, and said that when he saw Zen’s audition tape, he “knew it was him, immediately, 100%.” Tan added that when Zen was on the set, “people were very scared of him, but that’s just him being in character.”

Many might look to Zombiepura as a sign that Singapore’s film industry is continuing to develop, and that more genre films from the local scene might soon be a possibility. However, Heng had a warning. “Don’t go into this business,” Heng exhorted, half- (or maybe less than half?) – jokingly. “Go into something else. Go into property instead. Advise your kids to study hard.”