Clint Eastwood is 88-years-old and has been working steadily since the 50s, so it makes sense that some of his recent films deal with aging. In this drama, his character’s old age is an asset, because it makes him less suspicious – as a drug mule.

Eastwood plays Earl Stone, a nonagenarian horticulturist and Vietnam War veteran who has fallen on hard times after his house and farm is foreclosed upon. Earl is estranged from his family, including his ex-wife Mary (Dianne Wiest), his daughter Iris (Alison Eastwood) and his granddaughter Ginny (Taissa Farmiga). Earl comes across what he thinks will be a one-off opportunity as a drug runner for a Mexican cartel. Because the work is easy and pays extremely well, Earl finds himself coming back, unexpectedly becoming one of the cartel’s top mules.

DEA Agents Colin Bates (Bradley Cooper) and Trevino (Michael Peña) learn through an informant about a mule the cartel refers to as “Tata”, Spanish for “grandfather”. The deliveries are being brought into Chicago, with the agents closing in on the elusive mule. Back in Mexico, cartel kingpin Laton (Andy García) is pleased with Earl’s performance, but his lieutenants are spooked by the increasing DEA activity, taking issue with Earl’s penchant for unscheduled stops. Earl knows his successful run working for the cartel cannot last forever and faces the inevitable: he will either be killed by cartel enforcers or captured by the DEA.

The Mule is based on an article in The New York Times by Sam Dolnick, entitled The Sinaloa Cartel’s 90-Year-Old Drug Mule. Eastwood and screenwriter Nick Schenk, who got his big break penning Eastwood’s Gran Torino, have taken loose inspiration from the life of Leo Sharp, a World War II veteran who became a drug runner for the cartel run by El Chapo. Eastwood’s presence as director, producer and star means that it’s obvious that he has projected himself onto the Earl Stone character, who is drawn as a well-meaning, good-hearted man who just isn’t properly appreciated by his family and winds up doing bad things even though he is not a bad person. 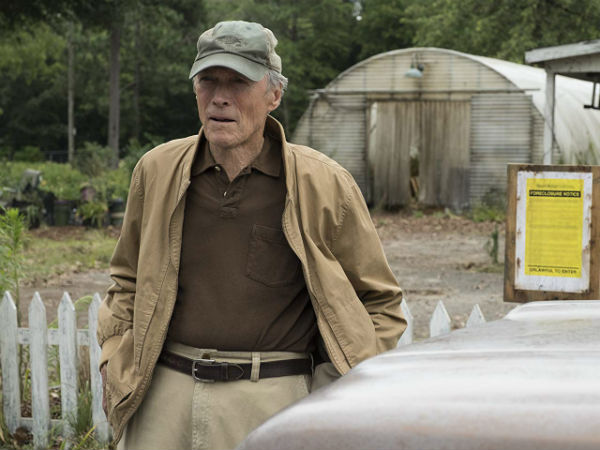 Eastwood is too in love with the character, who functions as an avatar of himself, for the movie to accomplish very much. Having directed 34 movies, Eastwood more than knows what he’s doing on the technical front and draws out good performances from his talented cast. However, he is squarely the centre of attention. Earl berates younger people for constantly being on their smartphones and functions as a stubborn guardian of a bygone age, an old-fashioned stalwart who doesn’t get the respect he deserves. He also has at least two threesomes with prostitutes, scenes which one imagines Eastwood doing multiple takes of just to be sure.

Cooper and Peña are given underwritten roles, but Cooper does get one good scene set in a Waffle House in which he gets to do a bit more than chase after Clint Eastwood. Dianne Wiest is the standout in the cast as Earl’s ex-wife, who harbours less ill-will towards Earl than his daughter Iris (played by Eastwood’s real daughter Alison) but who still wishes things could’ve been different. The skill with which Wiest conveys quiet sadness ensures the relationship is not overly treacly.

The scenes in which Earl is friendly towards the cartel members lower on the ladder who warm to him are quite endearing. Both Andy García and Laurence Fishburne are on hand to lend additional gravitas in relatively small roles as a cartel boss and a senior DEA agent respectively.

The Mule is not an instant classic the way some of Eastwood’s films are, and it is more obviously a vanity project than several other late-period Eastwood movies. There are moments when it’s charming and the Earl Stone character is not the worst person to spend a couple of hours with, but the movie fundamentally lacks any urgency or drive. The moments of tension, when it feels like Earl’s Faustian bargain is catching up to him, are too few and far between. It is ultimately saved by the compelling nature of the true story and Eastwood’s unquestionable competence as a director but is not one of the more essential entries in his oeuvre.

One thought on “The Mule review”