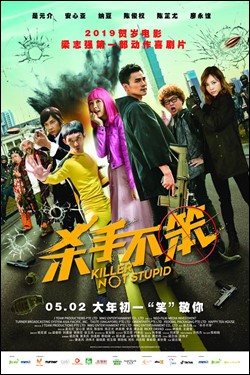 After including hints of action in the Ah Boys to Men series, Jack Neo leaps into the action-comedy genre with Killer Not Stupid. Do his broad comedic sensibilities jibe with the world of international terrorism and high-stakes intrigue? We’ll get to that in a bit.

The film centres on Hornet (Jay Shih), an elite assassin who wants out of the game. Hornet is assisted by his trusty tech guy Mark (Nadow), and they’re undertaking the proverbial ‘one last job’. Hornet and Mark must acquire a valuable flash drive dubbed ‘100K’, which contains comprising material on the world’s terrorist rings. Naturally, rival forces, including the triad leader ‘Grandma’ (Ryan Lian), are also after the drive. 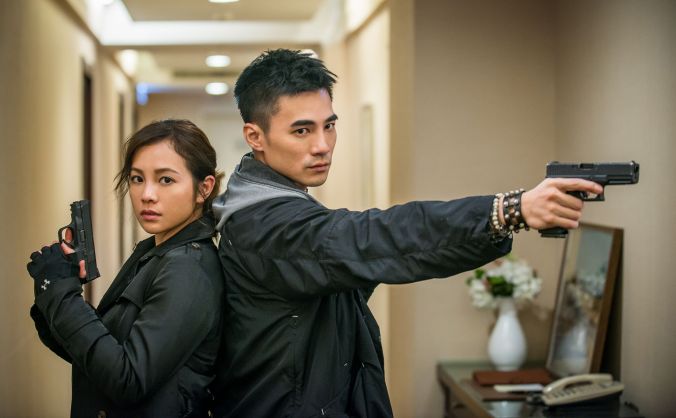 Along the way, Hornet and Mark meet Sha Bao (Gadrick Chin), Mark’s former classmate from Malaysia. All three have coincidentally booked into the same hotel as Talia (Amber An), the ditzy daughter of a slain Filipino drug lord. Talia is being escorted by the no-nonsense agent Ira (Apple Chan), who soon grows sick of Sha Bao’s antics. Now that Hornet wants to quit, Mother (Lin Mei-Hsiu), his former boss, puts a hit out on him. The international criminal Adolf (Ricky Davao) is hellbent on acquiring the 100K drive, meaning Hornet is pursued on all sides on his last job.

This appears to be the result of the Ah Boys to Men films doing well in Taiwan, leading to Taiwanese investors bankrolling Neo to make a movie in Taiwan with Taiwanese stars. Killer Not Stupid is completely unrelated to I Not Stupid and its sequels. It’s a shame that Neo chose to remind audiences of that film, which remains among his best. While I Not Stupid was broadly comedic and wasn’t especially deft in its handling of suicide, it was an incisive, resonant and moving piece of satire. Killer Not Stupid is, by contrast, a spectacular failure that is almost physically painful to watch. It’s not easy to make a film this bad, such that at some point it must have been a deliberate choice to handle everything in the worst way possible. 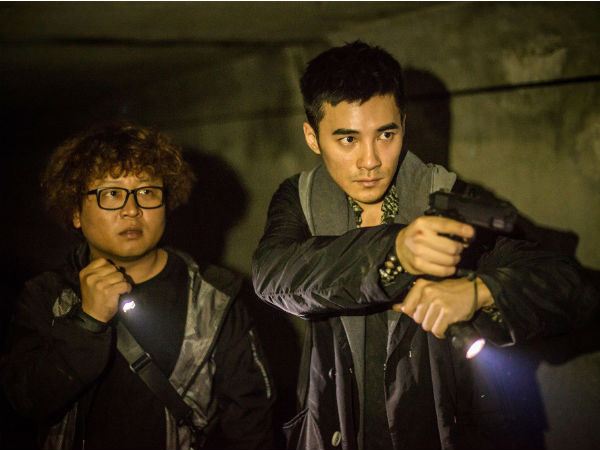 Action-comedies are a bit of a tricky genre in that if one isn’t careful, the comedy can undermine the stakes. This is exactly what happens with Killer Not Stupid. The unfunny gags, pratfalls and lame wordplay prevent the audience from taking any part of the international terror plot seriously. The film falls back on the tired device of the heroes disguising themselves in unconvincing drag. Every joke is accompanied by cartoony sound effects, including at least two uses of the sad trombone noise. If a joke is funny, it doesn’t need sound effects, freeze frames, superimposed graphics, or sped-up footage to tell audiences to laugh. Within seconds of that, characters get shot in the head. 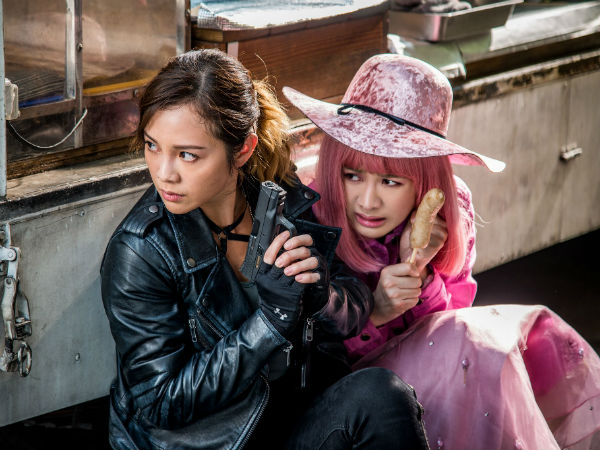 The most basic demonstration of stakes in action-comedies is the classic scene of Jackie Chan fighting a bad guy while he balances a priceless vase. In that moment, the stakes are that Jackie could drop and break the vase. Neo doesn’t understand this principle. It’s a pity because there clearly were talented stunt performers and riggers and competent special effects foremen involved at some point. The resources that Neo has at his disposal have engendered a self-indulgence, when other directors could have created something worthwhile with the same resources. That said, parts of the movie still feel very cheap: the MacGuffin is one of those ‘cryptex’ flash drives that you get as a corporate gift. 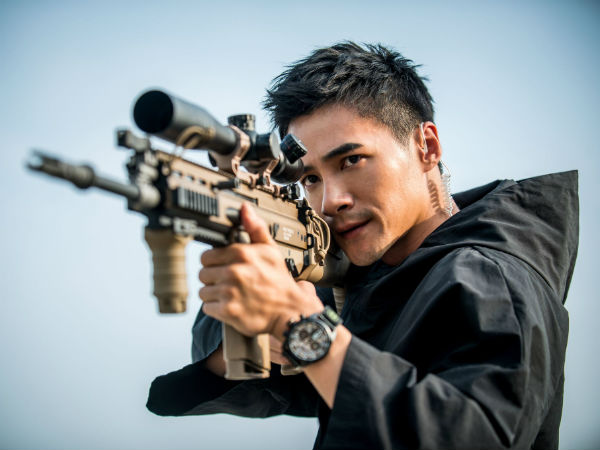 Mandopop duo Awaking’s Jay Shih is a passable leading man. He’s the most tolerable part of the movie because he’s one of the very few characters who isn’t mugging for the camera like a clown on cocaine. He also acquits himself well in the action scenes. 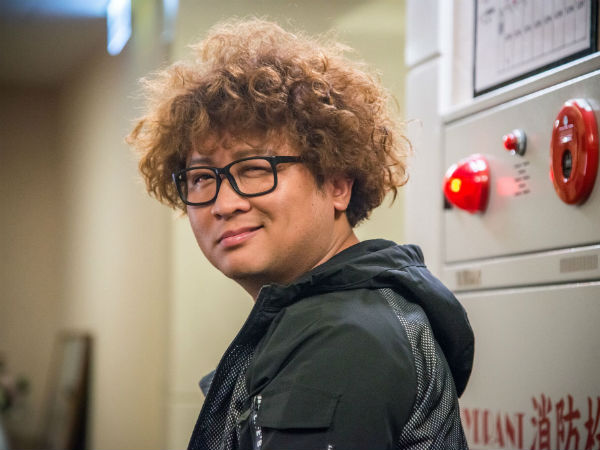 Nadow’s Mark is the standard comic relief tech guy. Most action movies have one character of this type. As annoying as Mark is, there are several other characters in the film who way outstrip him in terms of how grating they are. 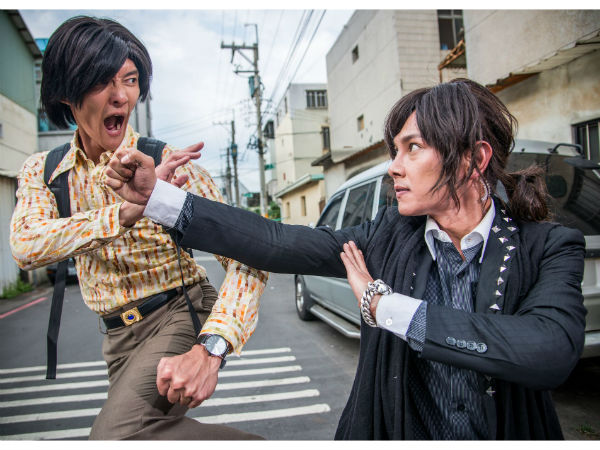 Gadrick Chin’s Sha Bao has the ridiculous gimmick of being obsessed with 70s Hong Kong movies, imagining himself to be the second coming of Qin Han and Bruce Lee. None of it is funny. Amber An plays up the spoilt princess stock type to an unbearable degree. 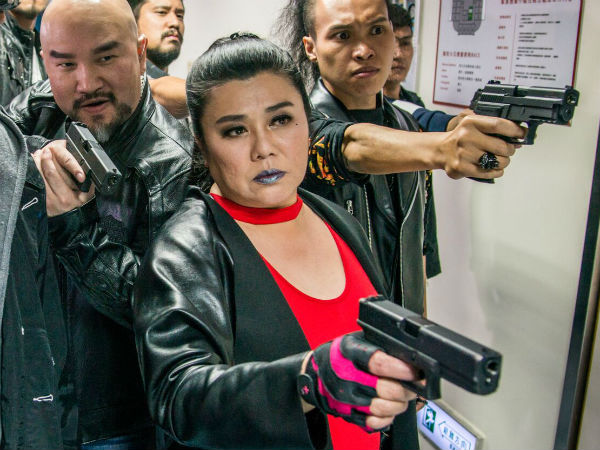 Lin Mei-Hsiu’s character Mother is just about the worst in the film, because as Hornet’s former employer who is now out to kill him, we should be intimidated by the character so we can fear for the protagonist. Instead, the character is maximally silly. 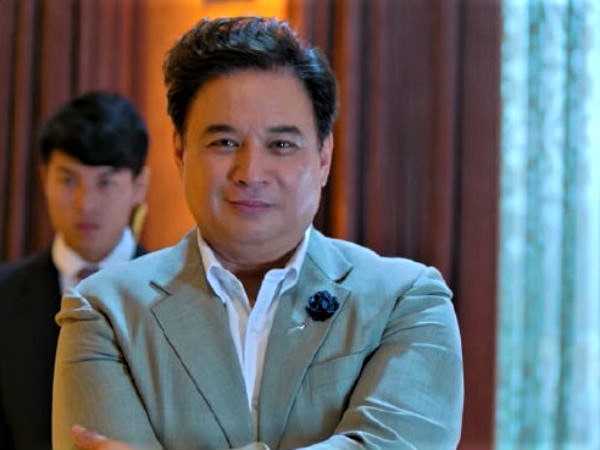 The villain is named ‘Adolf’, in case viewers weren’t clear he’s supposed to be the villain. Jack Neo is nothing if not a master of subtlety.

“The comedy that people like will be there and comedy is what I’m good at,” Neo declared at the press conference announcing Killer Not Stupid. This reviewer acknowledges that perhaps he isn’t the target audience for the film, but it is mildly unsettling at best, horrifying at worst that anyone could find this funny. We’ve always hoped for Singaporean filmmakers to create more action films, so it’s disheartening but not surprising that Neo gets to try his hand at this genre and completely fumbles it.