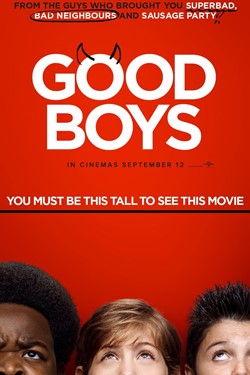 When you come across a comedy titled ‘Good Boys’, you can bet it’s named ironically: there’s going to be lots of sexual humour, swearing, drugs and alcohol. Such is the case with this film, in which a trio of 11-year-olds engages in some decidedly family-unfriendly behaviour.

Max (Jacob Tremblay), Lucas (Keith L. Williams) and Thor (Brady Noon) are three best friends who have just started sixth grade. Max has a crush on Brixlee (Millie Davis), and thinks he might have his shot with her when he is invited by popular kid Soren (Izaac Wang) to a ‘kissing party’. Max, Lucas and Thor don’t actually know how to kiss. Their quest to prove they’re not uncool and to ensure they won’t embarrass themselves at the party spirals into a misadventure involving party drugs, beer, a drone and running headlong into freeway traffic.

Good Boys is a risque comedy in the mould of Superbad which, if you can believe it, was released 12 whole years ago. Whenever children star in films which they technically aren’t allowed to see yet, there is the danger that things will get exploitative. While a lot of inappropriate stuff happens in Good Boys, there is an undercurrent of sweetness and sincerity which anchors the film and makes it seem like more than just an excuse to have kids yell the F-word a lot, even if plenty of F-words do get yelled. 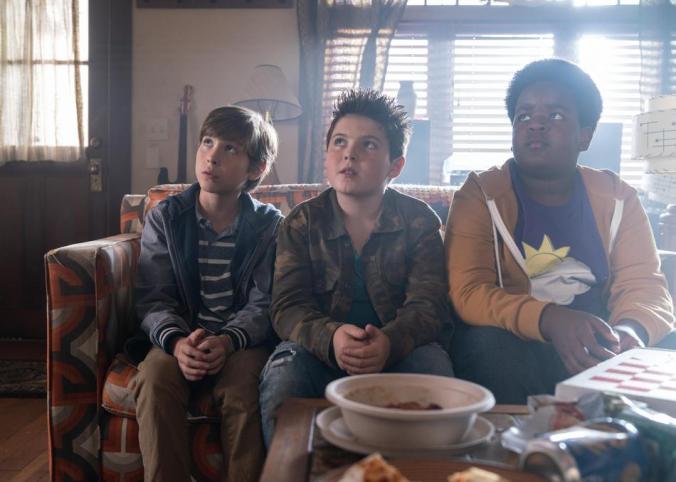 Much of what makes the movie work is the chemistry between the three leads. Jacob Tremblay, the breakout star of Room, has a strait-laced likeability to him and seems unerringly sweet even when he’s swearing up a storm. Keith L. Williams is the epitome of wholesomeness as Lucas, a stickler for the rules who did not sign up for any of this. Brady Noon’s Thor is the wannabe bad boy with a secret talent for musical theatre; his character is the least interesting of the three because it’s the most common archetype but he’s still entertaining in the role. 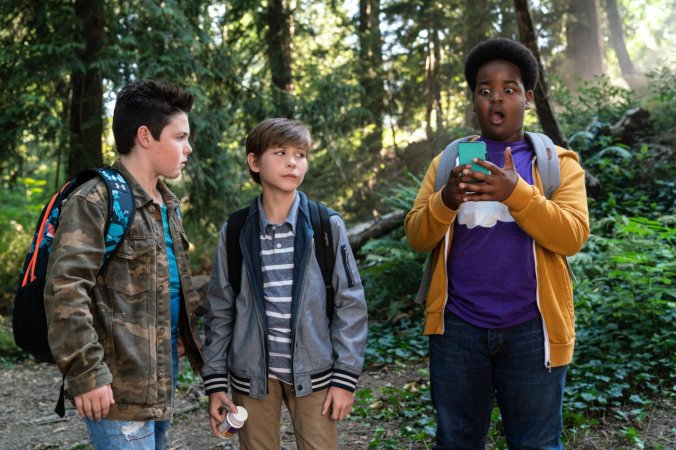 While the movie probably derives too much of its comedy from kids playing with sex paraphernalia, not knowing what they are, many of the jokes are sharp and funny. The film captures the typical 11-year-old’s desire to appear more grown up than they are and to pretend to understand more than they do. Good Boys works in no small part because it depicts the real anxieties of growing up and being caught between childhood and teenhood, even if in an extremely exaggerated manner.

“Restraint” is not a word one might use to describe a movie that features kids brandishing dildos as weapons, but Good Boys is careful not to actually cross the line. For all its purported shock value, there is no actual nudity or sex depicted, just lots of talk about it. This seems like the right choice, as the awkwardness of the situations that the protagonists find themselves in is more relatable than if the movie just dove head-first into filth. That said, nobody strictly needs to see a kid kiss what he thinks is a “CPR dummy”, wondering why there’s hair in its mouth.

Good Boys was a surprise success in the U.S., becoming the first R-rated comedy since 2016’s The Boss to top the box office. It shows there’s an appetite for movies like this, but there is the worry that imitators who don’t quite have the skill of the filmmakers of Good Boys will attempt to follow in this film’s footsteps. There is a laziness to some of its crass humour, but there’s plenty of heart here and three winning performances from its lead cast.