One of the most popular and enduring stage musicals since its premiere on the West End in 1981, audiences around the world can’t seem to get enough of Cats. This is the fifth time the all-singing all-dancing feline denizens have arrived in Singapore. Featuring music by mega-composer Andrew Lloyd Webber and based on Old Possum’s Book of Practical Cats by poet T.S. Eliot, there’s no doubt Cats is a phenomenon, even if it can be puzzling as to why.

Cats is a famously divisive show among theatre-lovers: it has its passionate devotees as well as its scoffing detractors, perhaps not unlike anything that becomes immensely popular. The success of Cats on the West End and on Broadway gave rise to the ‘megamusical’ trend, with shows becoming increasingly spectacle-based and geared towards family audiences and tourists.

It is by now a familiar chestnut that Cats doesn’t really have a plot, but this isn’t necessarily a bad thing. General audiences are so used to musical theatre productions being story-based that the revue format of Cats might seem difficult to get into, but the show has a way of making audiences surrender to it – we’ll discuss said ways as this review continues.

It’s more a premise than a plot: once a year, a clowder of cats who call themselves ‘Jellicle Cats’ gather for the Jellicle Ball – “Jellicle” being the way Eliot heard posh English people say “dear little”. At this momentous event, one of them is chosen to ascend to the Heaviside Layer – cat heaven. This cat will then be reincarnated. The cats all sing about themselves and each other: there’s the rock-n-roll sexpot Rum Tum Tugger, the mischievous cat burglars Mungojerrie and Rumpleteazer, Skimbleshanks the Railway Cat, Gus the Theatre Cat, the slinky Macavity the Mystery Cat and the dishevelled outcast Grizabella the Glamour Cat, among many others. The Jellicles are led by Old Deuteronomy, who must eventually select one of them to ascend. 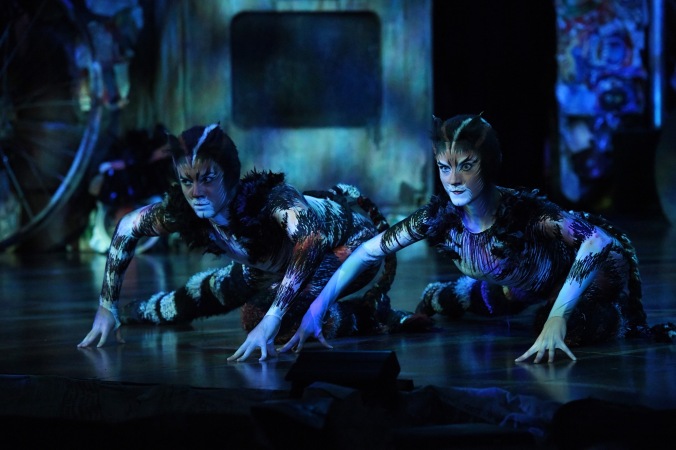 This reviewer can explain why shows like The Phantom of the Opera, Wicked, Les Misérables and The Lion King have become international phenomena. This reviewer cannot quite do the same for Cats and perhaps that is a part of the show’s peculiar charm. You’ve heard it all before: Cats is weird. Cats is bonkers. Especially with the upcoming live-action-ish film adaptation, the show is something of an easy target. And yet, Cats is wonderful. Cats is irresistible. And Cats must be seen to be understood – maybe “understood” is too strong a word, but you catch our drift.

Cats is stuffed with whimsy and eccentricity, and just the characters’ names (we haven’t even gotten to Jennyanydots and Bustopher Jones) are wont to elicit bemused chuckles. There is a playful innocence to it, but also a roiling sexuality beneath the surface. These cats sing and dance, but one also imagines them – to borrow lines from another Lloyd Webber musical – “hustling and fighting, scratching and biting”.

At the time it debuted, Cats was perhaps the most avant garde mainstream thing – or the most mainstream avant garde thing. There’s no denying it’s weird, but this is the theatre we’re talking about – if one seeks it out, one will find far, far weirder things out there. Cats is just a little bit past the average amount of weird and revels in this niche space. 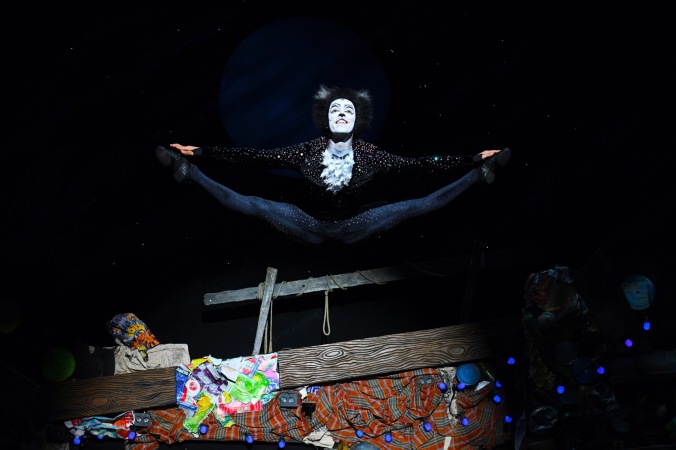 The history of the show’s development is full of strange and wonderful little nuggets. The show struggled to find financing and almost did not come to fruition, with Lloyd Webber on the verge of quitting and scrapping the whole thing multiple times. Eliot’s widow Valerie was understandably wary and closely watched the development of the project. Dame Judi Dench was set to play Grizabella but tore her Achilles tendon in rehearsal, with Elaine Page stepping in. The treatment of various characters has also evolved – the “Growltiger’s Last Stand” sequence went through multiple iterations, attempting to negotiate the racism in Elliot’s original text (the slur “chinks” was used and the villains were Siamese cats, with an earlier iteration of the show even having the actors put on exaggerated East Asian accents). 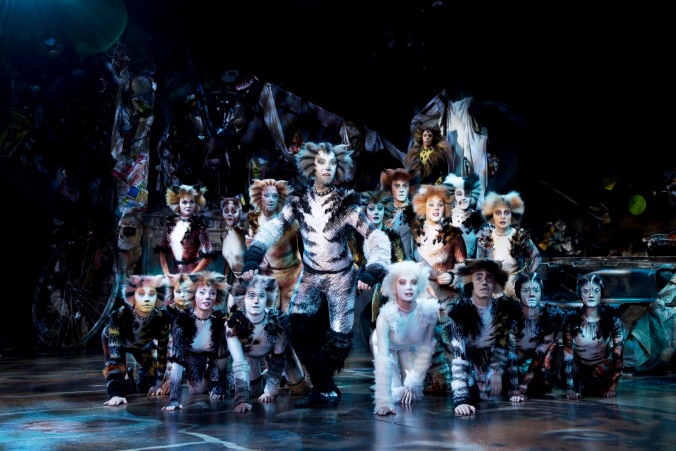 More than perhaps any other stage musical, Cats is also something that must be experienced live. Naturally, all live theatre is best experienced live, but photos and videos do not do the immersive nature of Cats any justice. Especially seated in the stalls, with the characters darting through the aisles, going up to sniff audience members, pausing to look around before scampering on and offstage, it’s hard not to be delighted. There isn’t much of a point in looking for something in the story to be emotionally invested in, but people have found things in many of the characters to connect to. 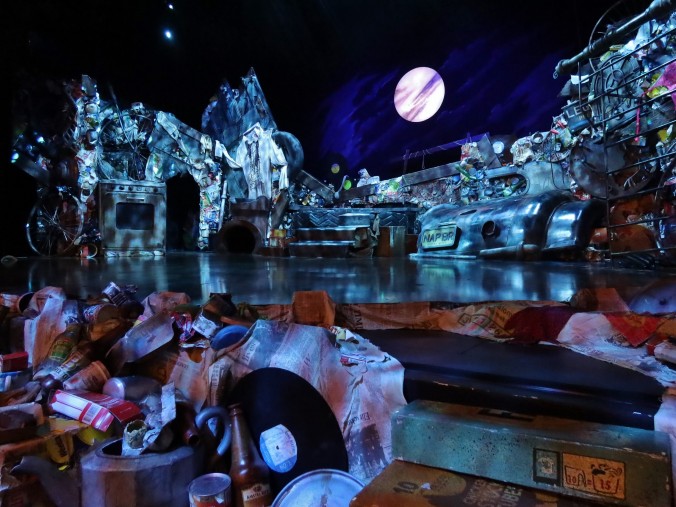 The set largely remains the same but is so detailed that one imagines wandering around it, constantly discovering new things. Scenic designer John Napier, whose credits also include Les Misérables and Miss Saigon, has crafted a junkyard playground that is the ideal backdrop for all of Cats’ craziness to unfold against. There’s a great Easter Egg here too – a license plate reads “NAP13R”. 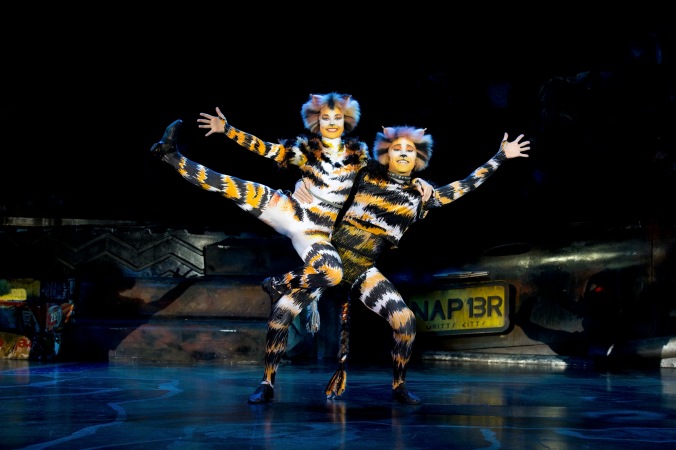 One of the main draws of the show is just how demanding it is on its performers, and as a result, how spectacular it is. This is a very dance-heavy show; its original choreography by the late Gillian Lynne, who also choreographed The Phantom of the Opera. It’s not dissimilar to watching a Cirque du Soleil show, marvelling at what these performers have trained to do. When Mungojerrie (Joe Henry) and Rumpleteazer (Kristy Ingram) cartwheel and handspring across the stage, we accept that this is just the way the characters are because of the effortlessness with which these feats are performed. Actors from the show’s past have consistently described it as among the most challenging and rewarding shows of their careers. 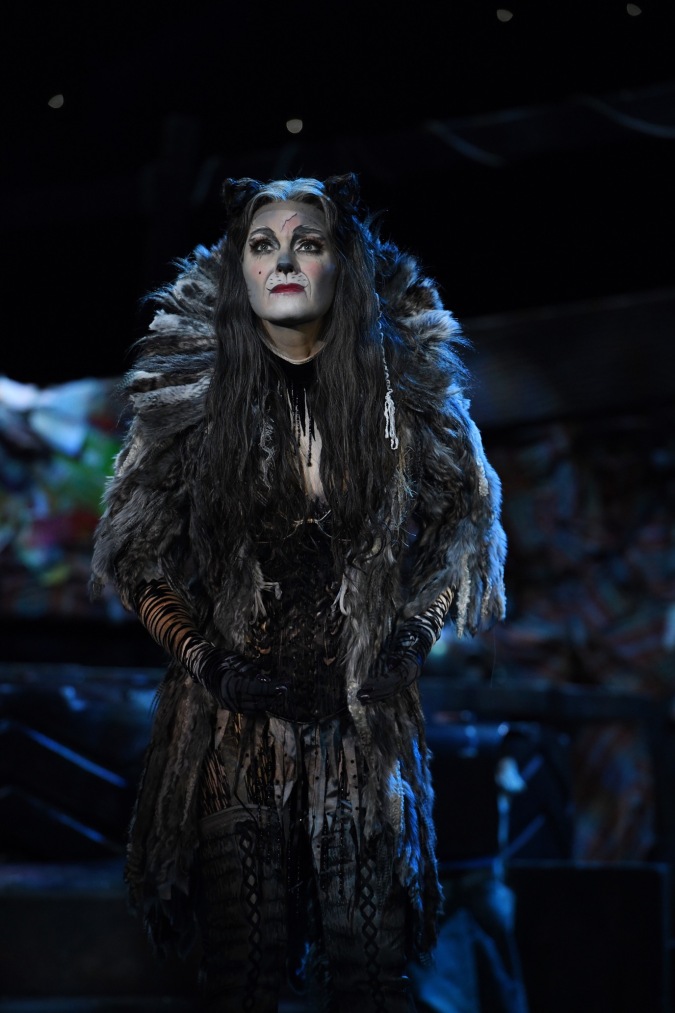 The show’s best-known song is of course “Memory”, sung by Grizabella (Joanna Ampil). The cast of this production largely hails from the UK, with the main exception of Ampil, who is Filipina. The Broadway and West End star has played Grizabella in earlier productions of Cats, and starred in Miss Saigon, Jesus Christ Superstar, Les Misérables and Rent, among others. Interestingly, the poem about Grizabella was initially unpublished, with Eliot deeming the character too sad for a children’s book. We first hear “Memory” as a prelude – strained and feeble, since Grizabella is herself elderly and weak. It might be jarring for those who only know the song as performed by popular artists. It is only later in the show that Ampil showcases her power and “Memory” roars to brilliant, stirring life, in what is the show’s cathartic emotional climax.

George Hinson has a grand old time thrusting away as Rum Tum Tugger, who has all the lady cats eating out of his paw. Nicholas Pound, who has also played Old Deuteronomy on the West End and in previous tours, lends warmth and authority to the leader of the Jellicle cats.

However, the standout performer is not a featured star. Danielle Cato plays Cassandra, a cat who has no lines, but handily (pawily?) steals the show. Cato’s physical precision and litheness is utterly mesmerising. She is always aware that she’s playing a cat, and even when she’s just sitting on stage, it’s hard to look away from her. She perfectly captures that thing cats do when they suddenly realise they’re great and get extremely pleased with themselves for a moment, before returning to being bored.

Cats is not for everyone, yet everyone should see it at least once just to get a feel for what all the fuss is about. Once one adjusts to not expecting a traditional three act narrative and looks at the show as a tapestry, as a shimmering reflection of the various colourful characters that make up any social group and that we might know in real life, Cats becomes easier to understand – well, “understand” is a strong word.

Photos: The Really Useful Group (except where otherwise stated)

Cats is presented by BASE Entertainment Asia and runs from 17 December 2019 to 5 January 2020 at the Sands Theatre, Marina Bay Sands, Singapore. Tickets start from $50. Visit https://www.sistic.com.sg/events/ccats0120 for tickets and more information.