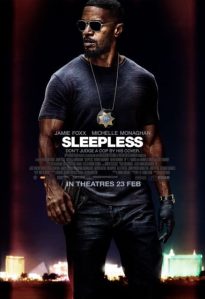 Jamie Foxx is up all night trying not to get killed in this action thriller. Foxx plays Vincent Downs, a crooked Las Vegas cop. Along with his accomplice Sean Cass (Harris), Vincent steals a shipment of cocaine from business tycoon Stanley Rubino (Mulroney). Rubino is in cahoots with the unhinged mobster Rob Novak (McNairy), heir to a Vegas criminal empire. When Rubino finds out about Vincent’s involvement, his men kidnap Vincent’s teenage son Thomas (Johnson). Vincent goes about rescuing his son, while keeping the kidnapping a secret from his estranged ex-wife Dena (Union). Meanwhile, Vincent earns the suspicion of Internal Affairs investigators Jennifer Bryant (Monaghan) and Doug Dennison (Harbour). All parties clash over the course of one night in a battle that tears through the Luxus Casino and Hotel.

Sleepless is a remake of the 2011 film Sleepless Night, a French-Belgian-Luxembourgian co-production. Sleepless Night was also remade as the Tamil-language action thriller Thoongam Vanam. Sleepless might star A-lister Foxx and possess fairly slick production values, but it’s hard to shake the vibe of a disposable direct-to-DVD action thriller. Despite all the twists and turns the story takes, Sleepless never becomes more than a blandly generic crime movie, failing to put a spin on familiar tropes. Seeing as the bulk of the film is set in the span of one night, it should have a breathless, pulse-pounding momentum. No such luck. This feels considerably longer than its 95-minute running time, even with a healthy number of action sequences. 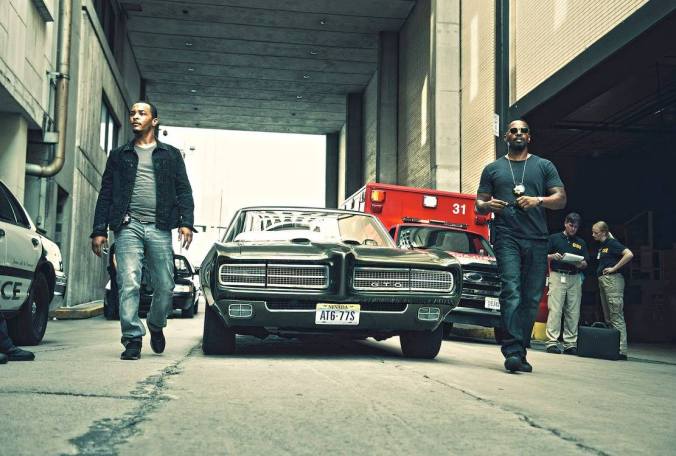 The official Twitter account for the film brazenly declares it “the action event of the year”. We would like to have seen the PR person stifle laughter as they typed this. While it by no means even approaches that hyperbolic statement, the action in this is not terrible, thanks to the involvement of veteran stunt coordinator Jeff Imada. Imada’s credits include the first three Bourne movies and several of the Fast and Furious films, so the fights in Sleepless do look brutal, if uninventive. Foxx and Harbour throw down in a spa, and the climactic showdown that moves from the casino floor to the garage does generate some excitement. Alas, it’s all too rote to stick in the mind of any action aficionado, and director Odar’s workmanlike style, heavy on the shaky-cam, lacks panache. 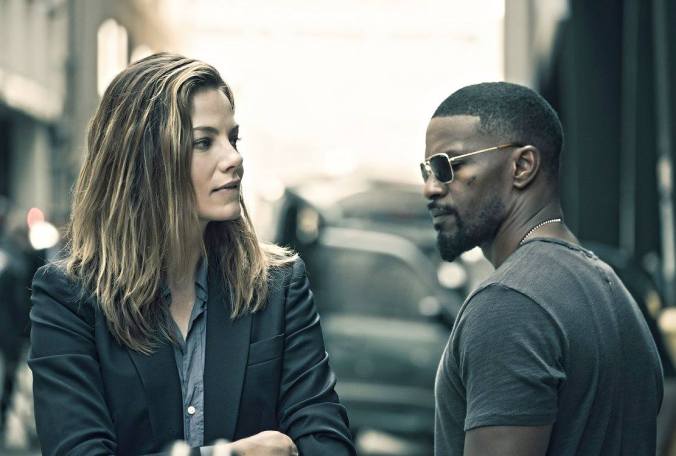 Foxx’s natural charisma is rendered moot in a role which is all knitted brows and gritted teeth. We’re introduced to Vincent as he steals drugs from a crime lord, but fret not, all is not as it seems and Vincent emerges as a typically heroic figure. Dispensing with the realism, Vincent shakes off being stabbed in the stomach like it’s no big deal. Monaghan is miscast as a dogged, tough cop, unable to shake her innate sweetness and coming off as unconvincing when she has to deliver silly hard-boiled dialogue. Both Harbour and McNairy are interesting actors despite not yet having that high a profile, Harbour being best known for Stranger Things and McNairy for Argo. Neither actor phones it in, but there’s not much they can do with this material. McNairy does try to have fun as the violent mobster scion, but is unable to significantly enliven the proceedings.

While Sleepless never plumbs the depths of bad movies that are dumped into theatres by studios in the beginning of each year, its mediocrity is still frustrating. It’s too dour to be fun and silly and too sluggish to be a piece of throwaway escapism.

Summary: An exercise in going through the motions, Sleepless is a crime thriller that fails to quicken the pulse.