Strap in, buckle up, insert alternate ways of securing oneself here – because things are about to get XTREME! *Guitar riff*. Johnny Utah (Bracey) is an FBI agent-in-training and a former motocross rider who left the sport after a tragic accident in his youth. When a team of elite thrill-seekers pulls off multiple heists around the world, targeting wealthy corporations, Utah proposes to his FBI instructor (Lindo) that he be allowed to investigate. Utah goes undercover, infiltrating the team and befriending its leader Bodhi (Ramírez), who explains that the daredevil exploits are actually about honouring nature. Utah falls in love with one of the team’s members, Samsara (Palmer), and British agent Angelo Pappas (Winstone) begins to doubt where Utah’s loyalties lie. As Bodhi’s gang pursues the ultimate rush, Utah is seduced back into the extreme sports world, but must put a stop to Bodhi’s criminal activities before he reaches the point of no return. 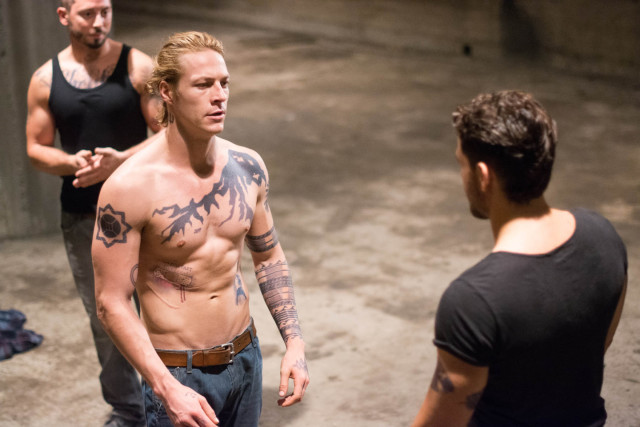 Point Break is a remake of the 1991 film of the same name, which some would go so far as to call a classic. The original Point Break is by no means flawless and certainly has its goofy moments, but its iconic status is well-deserved and the characters of Johnny Utah and Bodhi, as portrayed by Keanu Reeves and Patrick Swayze respectively, are certainly memorable. There’s no use beating around the bush: a Point Break remake is unnecessary, and doubly so because we already have The Fast and the Furious, which swapped out surfing for underground street racing. It is a touch ironic that Ericson Core, the cinematographer of the first Fast and Furious movie, is the director and cinematographer of the Point Break remake. It can be argued that if the characters had different names and this movie were called something other than Point Break, there would actually be less furore at it being a rip-off than there is now, given its “official” status.

The original film revolved around surf culture and the remake ups the ante by throwing everything and the kitchen sink into it, showcasing feats of big-wave surfing, wingsuit flying, free rock climbing, dirt road motorcycling and sheer face snowboarding. The film has roped in top real-life extreme sports athletes to perform the stunts and granted, they do look impressive, but there is something very dated about this approach. It makes the film feel like a relic of the late 90s, when things like the X Games were taking off and everything felt like a Mountain Dew commercial. The daredevil stunts are strung together with a plot device in which Bodhi is looking to complete the “Ozaki 8”, a series of extreme sports trials. The film has a larger scope than the original, with filming taking place in Austria, Italy, Switzerland, France, Mexico, Venezuela, French Polynesia and India, but there are times when it feels more like a ginned up Amazing Race than anything else. 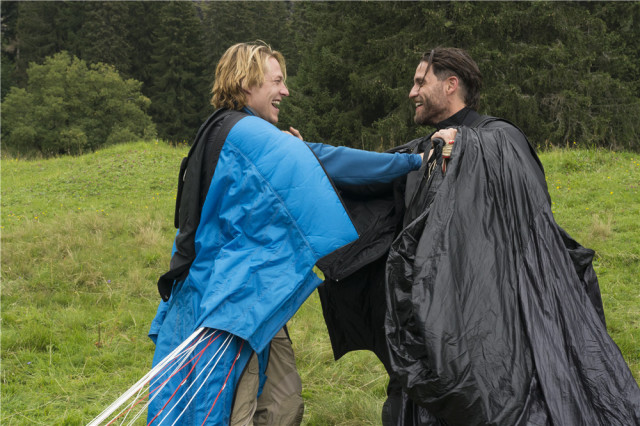 It is interesting that audiences feel so protective over the characters of Johnny Utah and Bodhi given that they’ve only been in one film, but it seems like it’s sacrilege for any actors other than Reeves and Swayze to take on those roles. Gerard Butler was originally cast as Bodhi but was replaced by Ramírez. While Ramírez brings some mystique to the role and tries his best to pull off the philosopher-warrior attitude embodied by Swayze, his interpretation of the character is far from sufficiently magnetic. Reeves isn’t exactly an untouchable paradigm of acting talent and from some angles, Bracey does sort of resemble Reeves. He does bring a heaping helping of whininess to the part. Similarly, Palmer is considerably more boring than Lori Petty was in the original. Gary Busey brought his trademark unhinged unpredictability to Pappas, while Winstone is the usual gruff English street tough he always is. Lindo is the stock authority figure, also doing very little. As a side note, the film features some of the least convincing tattoos we’ve ever seen in a movie. Guess the stunt budget left the makeup department high and dry.

It’s pretty obvious that the plot exists to string the stunts together, and it all comes across as very perfunctory and half-hearted. This is a movie that should naturally be flowing with adrenaline, but it often feels like it’s just being shoved along. A Point Break remake was a terrible idea to begin with, and even with all the extreme sports bells and whistles in the world, there’s no way this was going to be anything but a let-down. In the hands of screenwriter Kurt Wimmer, it’s even more laughable than in the original film when Bodhi waxes faux-philosophical. Sure, the original Point Break was cheesy, but that was part of its charm. In place of that, we get a whole lot of going through the motions, the end result mediocre rather than radical.

Summary: This remake boasts superbly executed stunts but is fully incapable of justifying its existence and, for a movie about extreme sports, is sorely lacking in energy. It’s pretty blah, brah.
RATING: 2out of 5 Stars
Jedd Jong

Shakespeare is the gift that keeps on giving, artists of all kinds continuing to find inspiration in the Bard’s work centuries after his death. The play Cymbeline provides the basis for this crime drama, which updates the setting of Ancient Britain to the present day. Instead of being the King of Britain, Cymbeline (Harris) is the leader of the Briton biker gang. His daughter Imogen (Johnson) is in love with the lowly Posthumus (Badgley), whom Cymbeline has taken on as a protégé, and has married him in secret. An enraged Cymbeline exiles Posthumus. Iachimo (Hawke) bets Posthumus that he can seduce Imogen and bring him proof. In the meantime, Cymbeline’s wife the Queen (Jovovich) hatches a plot to murder Cymbeline and have Cloten (Yelchin), her son from an earlier marriage, marry Imogen so he can usurp Cymbeline’s place as head of the gang. Also under threat is the fragile truce between Cymbeline and corrupt policeman Caius Lucius (Vondie Curtis-Hall), the King’s empire slipping through his fingers.

Cymbelineis adapted and directed by Michael Almereyda, known for his 2000 film adaptation of Hamlet. Almereyda’s Hamlet, which starred Ethan Hawke in the title role, was also a setting update – Hawke delivers the “To be or not to be” soliloquy while wandering the aisles of a video rental store. With Cymbeline, Almereyda was clearly inspired by Kurt Sutter’s TV series Sons of Anarchy, which revolves around a biker gang and takes inspiration from Hamlet. Cymbeline was even titled “Anarchy” at one point. Alas, it’s very clear that Almereyda is struggling to jam a square peg into a round hole, but not for lack of trying. The film strains to make its re-contextualisation a successful one, ultimately failing. Cymbeline is generally not regarded as one of Shakespeare’s greater plays and it has been noted that it recycles elements from the Bard’s earlier works, including Romeo and Juliet, Othello and Hamlet.

Second-rate Shakespeare is still high art, and this adaptation retains most of the original dialogue. Hearing the signature iambic pentameter outside of its intended context can be jarring if handled clumsily, and this take on Cymbeline has butter fingers. The original text has been abridged but not streamlined, the dense, labyrinth plot still pretty confusing. While Ethan Hawke looks like he knows what he’s doing, Penn Badgley and Spencer Treat Clark often deliver their lines as if they were reading the ingredients off the back of a shampoo bottle. Anton Yelchin bites into the Cloten role with glee, but his whiny performance gets annoying pretty fast. Regardless of how good an actor one is, it’s impossible to make the line “On her left breast/A mole cinque-spotted, like the crimson drops/I’ th’ bottom of a cowslip” sound naturalistic in a contemporary context, and perhaps it was never meant to be that way.

We know we sound like a broken record, going on about how awkward and stilted the film comes off in its presentation, but that’s because Cymbelinecould have been saved. It could have worked as a dramatic romance set against a war between a biker gang and corrupt cops, had Almereyda not been so precious about retaining the original text. There’s an attempt at verisimilitude, with characters scrolling through photo galleries on their iPads and looking up locations on Google Maps, but it still rings false. Re-contextualisations can work, if they’re handled deftly enough or if they revel in the silliness of the premise and spin a colourful alternate world around the story. Cymbeline is neither and falls flat because of it. 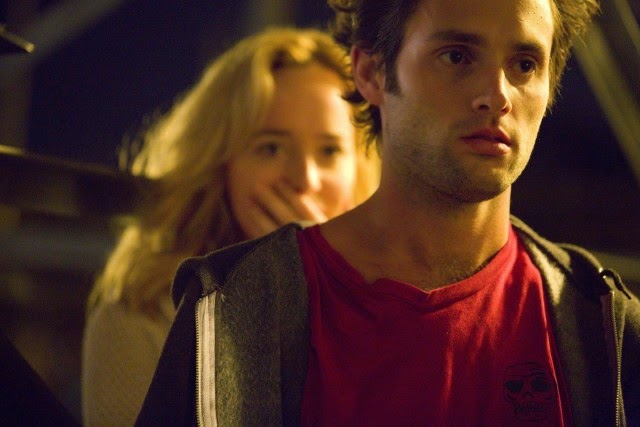 Summary:Some excellent actors and several mediocre ones are all left high and dry by this unwieldy adaptation that most audiences will find alienating and odd.
RATING: 2out of 5 Stars
Jedd Jong