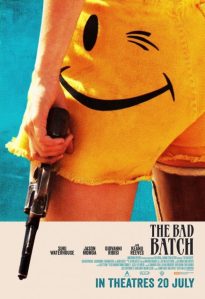 There’s something about the desert that inspires madness. Whether it’s dehydration-induced hallucination, the sense of isolation in a vast open space, or just the arid heat, the desert is fine backdrop against which madness can unfold. This twisted, post-apocalyptic fairy tale is very mad indeed.

Our heroine is Arlen (Waterhouse), who wanders across the god-forsaken Texas desert. She is part of ‘the bad batch’, individuals deemed unproductive to society, and exiled to fend for themselves. Arlen is captured by cannibals, who saw off and eat her arm and leg. Arlen manages to escape, and is taken by a Hermit (Carrey) to a settlement called Comfort. The Dream (Reeves), a drug lord, rules over Comfort, keeping his followers compliant by supplying them with illicit substances during raves. Miami Man (Momoa), one of the cannibals who kidnapped Arlen, is searching for his lost daughter Honey (Fink), who has been adopted by The Dream. A relationship fraught with tension and attraction develops between Arlen and Miami Man, as they fight for survival in an unforgiving world.

The Bad Batch is written and directed by Ana Lily Amirpour, who made her feature film debut with the “Iranian vampire spaghetti western” A Girl Walks Home Alone at Night. The Bad Batch is hard to describe, and even harder to review. It’s destined for cult status, and VICE Creative Director Eddy Moretti, who is an executive producer on this film, dubbed Amirpour “the next Tarantino”. This is a heady, trippy experience, abstract art painted on a canvas of post-apocalyptic desolation. Often graphic when it’s not moving very slowly, it’s often a challenge to watch. While vastly more expansive than Amirpour’s first film, she’s hardly ‘gone Hollywood’ with her sophomore effort, which is almost defiantly weird. There’s an audience for this, and it would probably play well at a festival like South by Southwest, but The Bad Batch is self-indulgent and meanders without a centre to anchor it.

Waterhouse, known mainly as a model and entrepreneur, comes off like a cross between Cara Delevingne and Kristen Stewart. The visual effects used to create the illusion that Arlen is an amputee are seamless, and the yellow shorts with a winking face printed on the back is a cool visual device. There’s every opportunity for Arlen to ascend to the pantheon of badass genre movie heroines, but it seems that isn’t exactly what Amirpour had in mind. The character floats through the story, such that when she does something that directly impacts the story, it feels less significant than it should.

Momoa plays a musclebound, tattooed antihero – while this doesn’t sound like a stretch for him, it’s probably the most acting he’s done in his career. Momoa strives to evince a depth from the Miami Man character, who is a knife-wielding cannibal but also has a soft side and is a gifted artist. The relationship that develops between Arlen and Miami Man seems purposely vague and under-developed.

Reeves’ character, The Dream, who lives in luxury surrounded by a harem who bears him children, is clearly inspired by notorious drug lord Pablo Escobar. It comes off more as an odd bit of stunt casting than anything else, even if Reeves is fairly fun in the role. The raves that The Dream presides over are strongly reminiscent of music festivals like Burning Man, and it turns out that Amirpour went to Burning Man and took acid, which inspired the acid trip scene in the film.

Carrey, gaunt, grimy and nigh-unrecognisable beneath a scraggly beard, seems to relish playing the Hermit. It’s the kind of character actor part he wouldn’t have done in his comedy movie A-lister heyday, and it’s the right pitch of quirky comic relief for this movie.

The Bad Batch will remind connoisseurs of the exploitation films that came out of Italy in the 70s and 80s, or of Alejandro Jodorowsky’s trippy psychedelic westerns. Amirpour has described the film as “El Topo meets Dirty Dancing”. While there’s a seductiveness to The Bad Batch’s scorched dreaminess, the film lacks the energy and momentum to sweep the viewer up in its madness.

Summary: The Bad Batch’s peculiarity will attract some audiences but alienate others. It’s an arthouse exploitation cocktail that’s been spiked with a little something extra, and it’s very much an acquired taste.

ROGUE ONE: A STAR WARS STORY

Star Wars devotees have long known that the galaxy has innumerable stories to tell beyond the Skywalker family saga, and moviegoers are getting their first taste of that with this spin-off.

Set just before the events of Episode IV, Rogue One reveals how the Rebel Alliance got their hands on the blueprints for the Empire’s planet-annihilating superweapon, the Death Star. Jyn Erso (Jones) is the daughter of Galen (Mikkelsen), an Imperial science officer and secret Rebel sympathiser. Separated from her father at a young age, she was raised by Saw Gerrera (Whitaker), a hard-line Rebel fighter. When Bodhi Rook (Ahmed), an Imperial pilot who has defected, delivers a message to the Rebels from Galen regarding the Death Star, Jyn is roped in to reach out to her father. Jyn teams up with Rebel intelligence officer Cassian Andor (Luna), who has his suspicions regarding Jyn’s loyalties. Also part of the team is K-2SO (Tudyk), a reprogrammed Imperial droid; Force-sensitive blind warrior Chirrut Îmwe (Yen) and Chirrut’s partner, the mercenary Baze Malbus (Jiang). Standing in their way is Orson Krennic (Mendelsohn), the treacherous director of advanced weapons research who is overseeing the Death Star program.

The premise for Rogue One seems like a no-brainer in hindsight: a war movie, with spies going behind enemy lines to complete a high-stakes mission, set within the Star Wars galaxy. Director Gareth Edwards has done everything humanly possible to assuage fears that this is merely a cash grab. Rogue One looks and feels like an authentic part of the Star Wars series, but has plenty of surprises in store despite being a prequel. We have a rough idea of where it will all lead, but the journey is still an exhilarating one with just the right amount of grimness. There still are jokes and amusing characters, but this is the right pitch of grim. The screenplay by Tony Gilroy and Chris Weitz (with Gary Whitta and John Knoll receiving a ‘story by’ credit) has a satisfying amount of depth to it. We get to experience the shades of grey and the confusion cast by the fog of war, somewhat refreshing in a franchise that often trades in moral absolutes.

Rogue One’s visuals remain faithful to the look of the original trilogy, while also feeling dirtier and more tactile than ever. We revisit the Rebel stronghold on Yavin IV, and travel to new moons and planets including Jedha, home to a holy Jedi city; perpetually-stormy Eadu and Sacrif, a paradise-turned-warzone. There is no shortage of battle sequences both on land and in space, including a full-fledged dogfight which provides astounding spectacle.

The effects work is an ideal combination of digital and practical, with what appear to be miniature effects used to depict the Star Destroyers in certain scenes. Every hit of blaster fire, each clump of dirt kicked up in an explosion, every time a Stormtrooper gets clunked on the head – it all feels real. That said, there are some digital face replacements which aren’t 100% convincing.

Creating a new Star Wars character must be a daunting task, given the iconic status of Luke, Leia, Han, Darth Vader et. al. Lead characters Jyn Erso and Cassian Andor will remind fans well-versed in the Star Wars expanded universe of Jan Ors and Kyle Katarn respectively, who recover the Death Star plans in the video game Star Wars: Dark Forces. Given her slight frame, Jones might not seem like the most obvious candidate for an action heroine, but she pulls it off. While many protagonists have back-stories as tragic as Jyn’s, the Oscar nominee sells Jyn’s defiance in the face of sorrow. Despite both characters being played by English women, Jyn is sufficiently different from The Force Awakens’ Rey, steelier and world-wearier, if understandably nowhere near as fun. 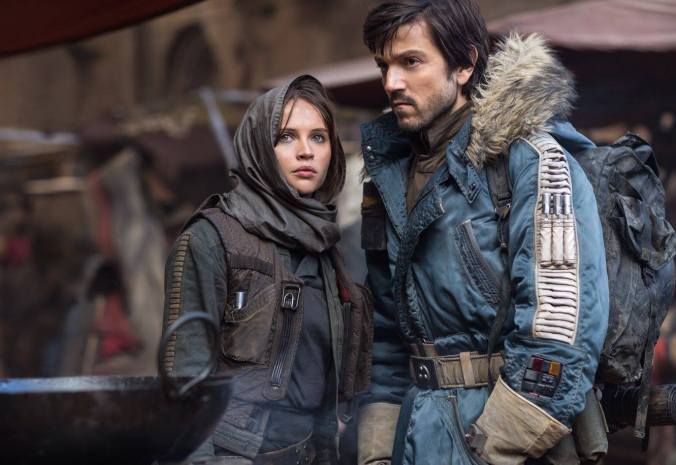 Luna’s Cassian Andor is gruff yet suave while not being a knockoff of the galaxy’s #1 loveable rogue, Han Solo. The development of Cassian and Jyn’s working relationship is believable and is mercifully devoid of twee romantic comedy bickering. They might not like each other, but they have a job to do, and are going to complete said job at any cost.

In Hollywood, Mikkelsen is known mainly for his villainous roles, and Rogue One gives him a chance to showcase his softer side as Jyn’s tortured father. The character has relatively little screen time, but Mikkelsen makes considerable impact in the given time.

Whitaker gives Saw a dangerous edge – he’s ostensibly one of the good guys, but his extreme methods warrant wariness. The character first appeared in the Clone Wars animated series, and it’s fun to see a pre-existing character incorporated into a live action Star Wars film.

Donnie Yen’s casting as a blind martial artist monk who spouts fortune cookie aphorisms should be greeted with an eye roll or two. While falling back on these stereotypes is not particularly progressive, it’s hard for us to get upset at Yen delivering an epic smack-down to a pack of Stormtroopers. Those familiar with Jiang’s work might have a hard time picturing him as a burly bruiser, but his Baze Malbus fits that position just fine, and complements Chirrut nicely.

There is a grand Star Wars tradition of comic relief droids, but K-2SO differs from his predecessors in that he actually is intimidating. The character’s design is striking and Tudyk’s bemused, ever-so-slightly stilted delivery sounds just right emanating from the lanky, powerful droid. Ahmed’s Bodhi Rook is not as memorable as the other characters, but he does get the distinction of coining the call-sign Rogue One.

Mendelsohn’s Orson Krennic is everything this reviewer hoped for in a villain. Krennic is cold, supercilious and brutal, fitting right in with the Imperial higher-ups of the original trilogy. At the same time, he is eager to please and seeks the validation of Darth Vader and the Emperor. Speaking of Vader, he is used judiciously here, Edwards resisting the temptation to be overly reliant on one of the greatest screen villains ever. James Earl Jones returns to provide the voice, with “a variety of large-framed actors” donning the helmet.

Reshoots months after production had completed and the replacement of composer Alexandre Desplat with Michael Giacchino led to rumblings that Rogue One might be on shaky ground. Edwards has soundly disproven sceptics with a film that hits all the right notes. There are homages to the series’ past without it turning into a mere parade of fan-service, the action sequences are plentiful and visceral, and the characters are easy to care about. Consider this battle won.

Summary: A riveting, richly-realised adventure tinged with the right amount of darkness and maturity, Rogue One transcends the notion that spin-offs aren’t as worthy as the ‘real thing’. An auspicious first entry in the Star Wars anthology.