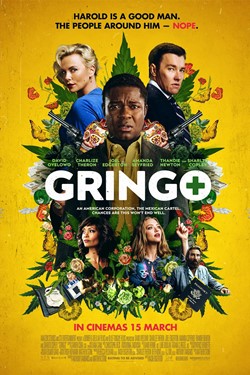 Based on the poster alone, Gringo looks the wildest 2018 film you’ve never heard of. Mexican-inspired imagery including Day of the Dead skulls are arranged between marijuana leaves and guns. Stars like Charlize Theron and Amanda Seyfried are visible, and in the centre of it all is a hapless-looking David Oyelowo. It’s enough to make one wonder aloud, “what’s going on here?”

This dark action comedy revolves around Harold Soyinka (David Oyelowo), a mild-mannered business representative who works for the pharmaceutical corporation Promethium. Unbeknownst to Harold, his boss Richard Rusk (Joel Edgerton) and Rusk’s associate/mistress Elaine Markinson (Charlize Theron) are up to no good. 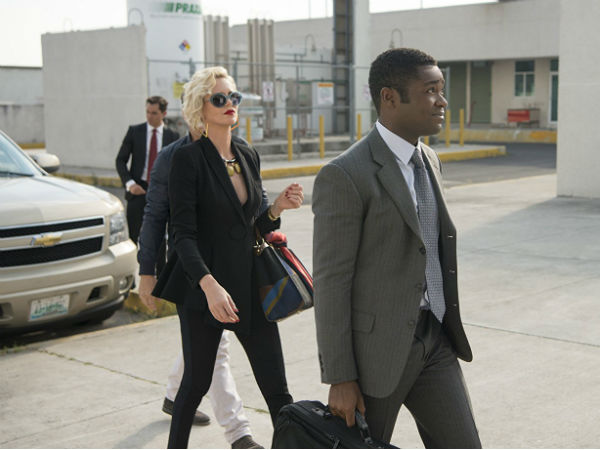 On what Harold thinks is a routine business trip to Mexico, he inadvertently gets kidnapped, becoming entangled with a drug kingpin known as ‘the Black Panther’ (Carlos Corona). Harold also crosses paths with Sunny (Amanda Seyfried), whose boyfriend Miles (Harry Treadaway) has been paid to smuggle drugs across the border. Richard calls his brother Mitch (Sharlto Copley), a former mercenary-turned aid worker, to rescue Harold.

Gringo is directed by Nash Edgerton, brother and oft-collaborator of Joel. This is a film that’s hard to place: it wants to be a dark comedy and a madcap action caper at the same time but doesn’t gather enough momentum to work as either. There are individual lines which are funny and some of the performances are mildly entertaining, but Gringo seems to be mostly spinning its wheels. There are moments when it feels like a disposable direct-to-DVD flick, but then Charlize Theron shows up. 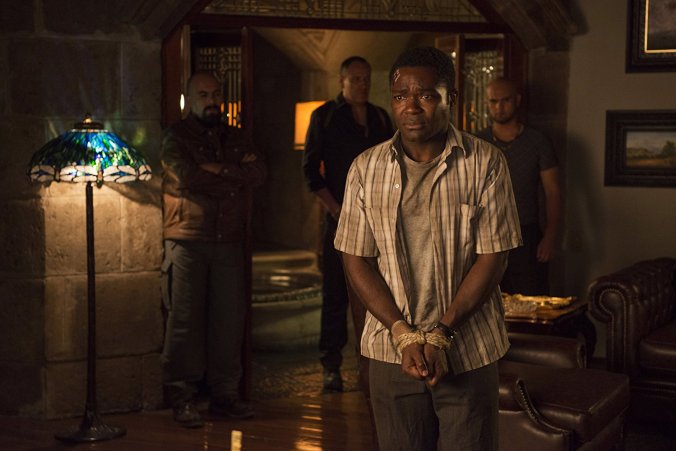 For a movie in which a pharmaceutical company gets embroiled with Mexican drug cartels, attracting the attention of the DEA, the stakes never seem especially high. Gringo is neither intense enough to work on a visceral level nor heightened and silly enough to whisk audiences along for the ride.

A major contributing factor to Gringo’s problems is how its characters are written. The protagonist Harold is a buttoned-down good guy, while his bosses are callous and amoral in an over-the-top manner. 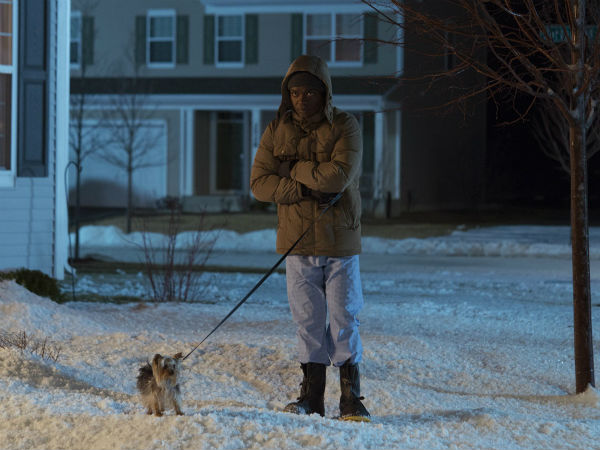 While Oyelowo does a fine job of playing an unassuming man who gets caught in over his head, it seems like a waste of his talents. In the name of avoiding confrontations, Harold has spent most of his life as a pushover, and it’s taken a crisis for him to assert himself. This is something we’ve seen done before and done better. 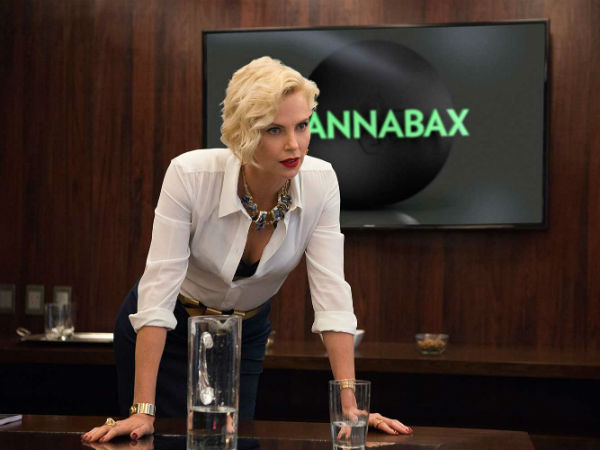 Theron is not exactly known for her comedic chops, but we can see why she wanted to have a go at this. Theron is also a producer, through her Denver and Delilah production company. Elaine is an unapologetically awful person, who says things like “fat people are so funny”. This feels like a role that a more comedic actor, say someone like Kristen Wiig, would play brilliantly. 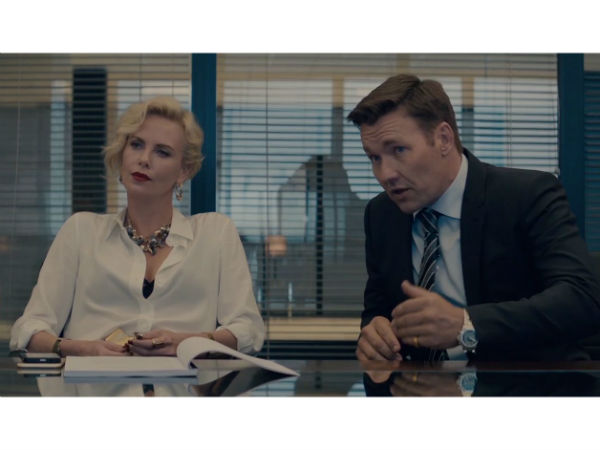 Weirdly enough, Joel Edgerton also feels miscast. Richard Rusk is a smooth-talking CEO, but Edgerton never quite comes off as gleefully slimy. Thandie Newton is wasted in a throwaway role as Harold’s wife Bonnie, while Amanda Seyfried doesn’t get much to do either. 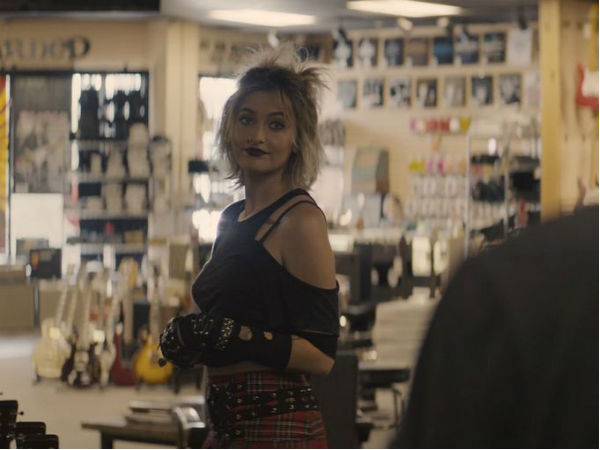 Copley is great fun, as he usually is. His character is probably the most distinctive in the film, but he’s still underutilised. Paris Jackson, daughter of Michael, makes her feature film debut here, but it amounts to not much more than a cameo. 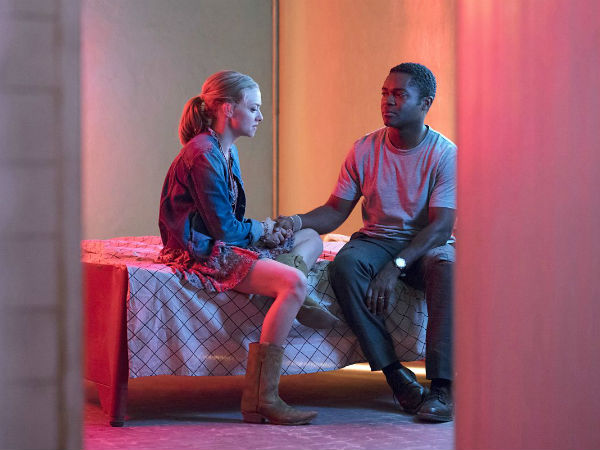 Gringo is a highly uneven curiosity that doesn’t have the bite, the devil-may-care energy or manic inventiveness that a dark comedy caper should. It plays into the stereotypical depiction of Mexico as lawless and overrun with drug cartels, without giving audiences anything they haven’t seen before. The talented cast is left stranded by material that’s only fitfully funny and doesn’t quite hang together.