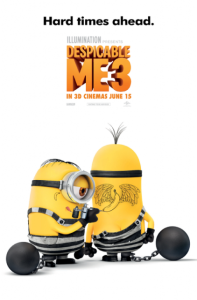 Supervillain-turned-doting-dad Gru (Carell) is back, with his wife Lucy (Wiig), adopted daughters Margo (Cosgrove), Edith (Gaier) and Agnes (Scharrel), and yes, the Minions (Coffin) in tow. In this instalment, Gru and Lucy face off against Balthazar Bratt (Parker), a dastardly, bitter former child star with an 80s pop culture and fashion gimmick. Gru faces upheaval when Valerie Da Vinci (Slate), the new chief of the Anti-Villain League, unceremoniously fires both Gru and Lucy. The Minions, longing for the glory days of being on the wrong side of the law, revolt and leave Gru’s employ. During all this, Gru discovers a secret that his mother Marlena (Andrews) has been keeping from him for his entire life: Gru has a twin brother. Gru finally meets Dru (also Carell), who is eager to join his brother on his exploits and attempts to convince Gru to carry on the proud family legacy of villainy. Gru and Dru embark on a quest to steal back a priceless diamond from Balthazar, as Balthazar plots his revenge on the town that scorned him: Hollywood.

We’ll be upfront about it: Despicable Me 3 wasn’t exactly high on our list of summer movies we were looking forward to. One is likely to find more people who are annoyed by the Minions than who find them adorable, but it’s not just that. The first Despicable Me film was weird, inventive, subversive and full of heart. At that point, Illumination Entertainment was still an underdog. Now, with a string of box office successes under its belt, not to mention tons of Minions merchandise and even theme park rides, it all seems to have gone to the heads of producer Chris Meledandri and the other Illumination bigwigs. The studio appears to be heading down the Dreamworks path, and Meledandri has been instated as Universal’s equivalent to Disney/Pixar’s John Lasseter. Early in Despicable Me 3, we get a particularly mean-spirited swipe at Finding Nemo. This can’t help but recall the sly, slightly bitter digs at Disney that were snuck into the Shrek movies.

Kids in general are unlikely to care about animation studios jostling for supremacy, and kids in general are likely to enjoy Despicable Me 3. The animation is energetic, the gizmos and gadgets on display are over-the-top and imaginative, and there is so much slapstick. The main issue here is that the film isn’t character-driven at all. In the first film, the blossoming relationship between Gru and his young charges served as the film’s emotional core. Then, the Minions became the toyetic marketing sensation they are, and that got pushed to the background. One can sense directors Coffin (who also voices all the Minions), Balda and Guillon struggling with the question “how much of the Minions is too much?” For most of this film, the Minions are separated from Gru, accidentally entering a singing competition and then getting tossed into prison, where they spoof Jailhouse Rock. It’s all gag-driven, and there are several genuinely funny jokes here, but it ends up being scattershot.

“Long-lost twin brother” is a plot device screenwriters truck out when they’re all out of ideas. In this case, there’s an attempt to wink and nod at how it’s a bit of a cheat, but there’s still not enough to justify going this route. Carell gets to try a slightly different, higher-pitched voice as the irrepressibly cheerful Dru, and for all of five seconds, it’s funny that Dru has lustrous blonde locks, while Gru is bald. Despicable Me 3 tries for an emotional arc with Lucy struggling in her position as the girls’ adoptive mother, clashing with Margo in particular. While it’s an attempt to add depth to the story, it doesn’t become much more than just an attempt, and the conflict is resolved too easily.

Parker, along with South Park co-creator Matt Stone, has long been the gatekeeper of offending everyone for the sake of comedy. Parker and Stone have been especially savage towards what they view as the Hollywood elites, who will stop at nothing for a quick buck. As such, it seems like a sell-out move for Parker to take a role in the Despicable Me franchise, but the character is amusing. A delusional former child actor who obsessively grasps at the remains of his glory days is a familiar archetype, but the 80s gimmick is enjoyably silly. There are perhaps one too many snippets of songs from the era, including Take on Me, Bad, Sussudio and Physical, though.

There exist more desperate examples of attempts to keep floundering franchises afloat, and there’s still enough wit on display in Despicable Me 3. However, parents are likely to get increasingly impatient with these movies as more and more get made, when there are other animated films out there that older viewers will get more out of.

Summary: if Minions make you miserable, you don’t need us to tell you to give Despicable Me 3 a wide berth. There’s more emphasis on sustaining a lucrative franchise, less heart, and more animated zaniness to amuse the kids and annoy the adults.

Clad in blue overalls with thick goggles over their eye(s), preoccupied with bananas and spouting gibberish, the small yellow creatures known as Minions have scuttled their way into the collective popular culture consciousness. In this prequel/spin-off to the Despicable Me movies, we discover the origins of the Minions, who have been on earth since the dawn of time, drawn to evil masters whom they loyally but often ineffectively serve. It is 1968 and after a long period of unemployment, Kevin, Stuart and Bob set out to seek a new villainous employer for their clan. The stylish, dastardly Scarlet Overkill (Bullock) seems to be just the new boss the Minions seek. Her husband, inventor Herb (Hamm), outfits Kevin, Stuart and Bob with nifty gadgets and they are tasked to steal the Queen’s crown from the Tower of London for Scarlet, who dreams of ruling over the British Empire. Naturally, things go awry for our tiny yellow protagonists. Uh oh.

It is very easy to be cynical about the existence of this spin-off film. A “minion” serves an evil overlord, who in the context of the Despicable Me series, is Steve Carell’s Gru. Here, the Minions, side characters by design, are given their own show to carry. There is an industry term for something with kid-targeted merchandising potential – “toyetic”. The Minions are as toyetic as they come, designed to be slapped on everything and anything that exasperated parents can fork over the cash for, with a new wave of Minion mania set to strike with the release of this movie. When McDonalds offered Minion Happy Meal toys here in Singapore, lines snaked around the block, rivalling those for Hello Kitty merchandise. It was a goofy, likeable idea to start with, but now it can’t help but feel all market tested and focus grouped out. A story focusing solely on the Minions would have worked fine as a short film or as a theme park attraction – actually, those already exist, but that doesn’t diminish the shiny, lucrative appeal of a feature-length summer release. 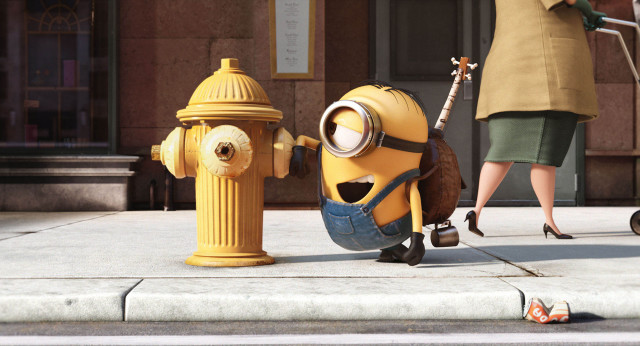 That’s essentially a roundabout way of saying that Minions has no real need to exist, which sounds like a very curmudgeon-y statement indeed now that we’ve read it out loud. For what it is, the film is harmless, often quite amusing and very competently animated. Pierre Coffin co-directed both Despicable Me films and Kyle Balda helmed three Minion-centric short films included on the Despicable Me home release. Coffin and Chris Renaud, co-director of the Despicable Me movies, voice all the Minions themselves. There are several eye-catching sequences and plenty of fun period details for the parents in the audience to grab onto – Kevin, Stuart and Bob walking beneath a giant Nixon campaign poster is a delightfully surreal image. There are perhaps one too many pop culture references – for example, the Minions bumble into the Beatle’s famous Abbey Road crossing. The expected slapstick is not in short supply, but this reviewer’s favourite gag, featuring time-travelling mad scientist Dr. Flux, didn’t involve the Minions at all. 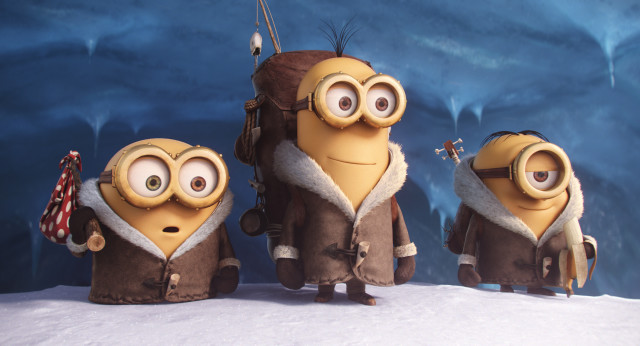 It was assumed that the Minions were the genetically-engineered creations of Gru – the short film “Orientation Day” follows a bunch of freshly-cloned Minions around Gru’s lab. The Minions’ new back-story raises very many questions. Is this one tribe the only group of Minions in existence? What implications are there in these creatures’ nature to be drawn to only the most unsavoury beings currently alive? Would they have leapt at the chance to serve, say, Adolf Hitler? It makes sense if their lives have no meaning apart from indentured servitude if they were grown that way in a lab, but these creatures are naturally occurring. We’re definitely expending too much thought on it, but these notions did prove very distracting throughout the film’s duration. 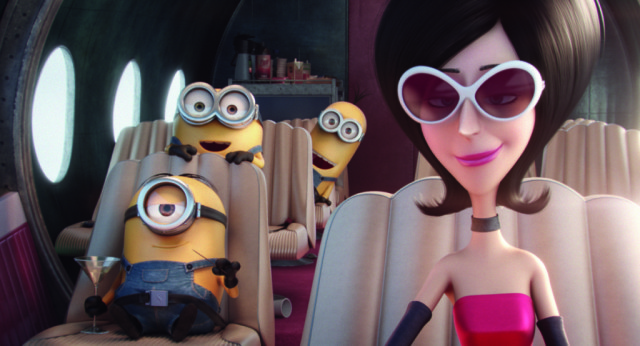 Sandra Bullock is the marquee-name star chosen to headline the film as Scarlet Overkill, the super-villainess kitted out in an array of dresses that also serve as booster rockets and who’s out to prove being a flashy career criminal isn’t just a guy’s game. She’s fine, but nowhere near as charismatic and entertaining as Steve Carell before her, and it is evident that she’s not a seasoned voice actress. Playing Scarlet’s laconic husband, Jon Hamm puts more effort into transforming his voice, but it’s not an especially memorable performance. Michael Keaton and Allison Janney voice a couple who let Kevin, Stuart and Bob hitch a car ride to the villain convention; it’s little more than a cameo. 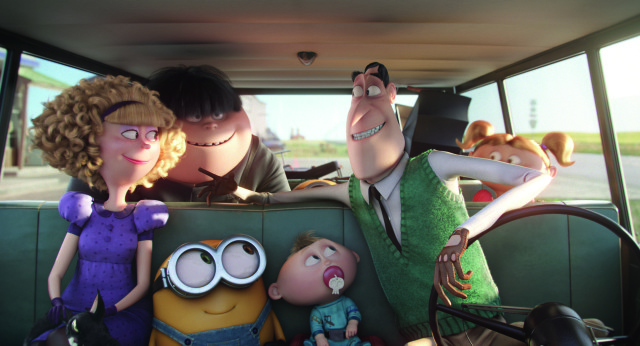 It’s an animated film containing popular, easily-marketable critters and it’s being released during the summer holidays, so of course Minions is going to do well at the box office. It’s mostly pleasant enough, sometimes annoying but never outright cringe-inducing and it moves along at a decent clip. Because of the inherent simplicity of the Minions as characters and the fact that they have to carry this movie on their little yellow shoulders, this lacks the crucial emotional backbone present in the first Despicable Me film. Kevin, Stuart and Bob may be designed to be analogues for Margo, Edith and Agnes, but they just can’t replace the heart that the three girls and their emotional connection to their adoptive dad bring to the franchise.
Summary: Yes, the tykes will love it and the accompanying adults might find some tidbits hidden in the 60s setting, but Minions can’t transcend its function as a cash grab vehicle.
RATING: 3 out of 5Stars
Jedd Jong