Sam Worthington has encountered aliens, robots and the Greek pantheon across his acting career. In this faith-based drama, Worthington comes face to face with God Himself – or Herself, as the case may be.

Worthington plays Mack Phillips, who has endured a difficult childhood with an abusive father (Derek Hamilton). Mack is happily married to Nan (Mitchell), his wife of 18 years, and they have three children together: Josh (Munroe), Kate (Charpentier) and Missy (Eve). A family tragedy leaves Mack in shambles, questioning the existence of God. When Mack receives a letter inviting him to ‘the Shack’ signed ‘Papa’, Missy’s nickname for God, his first instinct is that it’s a cruel joke. In a moment of desperation, Mack decides to investigate, on the off chance that God really might be waiting for him in the woods. He is greeted by Papa (Spencer), Jesus (Alush) and Sarayu (Sumire). While Mack is unable to believe the bizarre circumstances, at first, he eventually allows his soul to be healed as he spends time with the physical manifestations of the Holy Trinity.

The Shack is based on the 2007 novel of the same name by William P. Young. The self-published book eventually became a best-seller, resulting in lawsuits over royalties and authorship. It’s as funny as it is sad that behind this inspirational novel which has been credited with “changing lives” is a story of greed and animosity. While The Shack is beloved by millions around the world, it has also drawn the criticism of several theologians, pastors and priests, who claim that it misrepresents God as described in the Bible and that it echoes New Age teachings.

Faith-based movies have gotten a bad rap, criticised for everything from poor production values to the use of strawman arguments. The Shack tackles topics that are darker and less comfortable than one would find in your average Christian movie. It makes a valiant attempt at addressing hurt and anger at God. At its heart is the Problem of Evil, the conundrum of how to reconcile a benevolent God with the existence of evil. This has been mulled over by philosophers and theologians for centuries, and the answers presented in The Shack aren’t exactly convincing. There’s plenty of blatant emotional manipulation, and after a downer of a first act, things get syrupy fast.

“The secrets we keep have a way of clawing themselves to the surface,” narrator Tim McGraw intones. Judging by Worthington’s performance, Australian accents are a lot like secrets that way. There are many dramatic moments in which Mack tearfully pleads with the members of the Trinity to explain why God allows such terrible things to happen in the world. Worthington isn’t phoning it in, but there are times when it seems like he might’ve run off in-between takes to make panicked phone calls to James Cameron, demanding why Avatar 2 isn’t ready for production yet.

The film’s portrayal of God the Father as a black woman has raised several eyebrows. Apparently, this is a form with which Mack will be comfortable, which is why God chooses this guise to appear to Mack in. While Spencer’s performance brims with good-natured warmth, this is an example of the ‘Magical Negro’ trope through and through, the Southern mammy housekeeper.

We acknowledge that this is the first English-language film to actually cast an Israeli actor as Jesus, and depicting Holy Spirit as an ethereal Japanese woman is, if nothing else, interesting. Canadian First Nations actor Graham Greene, who won an Oscar for Dances with Wolves, also shows up, as does Brazilian actress Alice Braga. It’s kind of a step in the right direction that the film has as diverse a cast as it does, but it has the unfortunate implication of people from other ethnicities guiding the white guy to spiritual enlightenment. This is exactly what Doctor Strange, which cast a white woman in a traditionally Asian, male role, was bending over backwards to avoid, creating a new set of controversies in the process.

Many other works of fiction have attempted to humanise God, to render a figure often seen as distant and unapproachable more relatable. The Shack’s approach to this is one of the reasons why it’s been decried as heretical by certain scholars. There are viewers who might find comfort in seeing the Trinity being relaxed, friendly, patient and caring. However, there are others who might consider this too Chicken Soup for the Soul-esque, its blend of sentimentality and magical realism altogether too cloying. Other reviewers have mocked The Shack as coming off like a special episode of The Oprah Winfrey Show – at one point, Winfrey herself was linked to the Papa role in this film. There are many who have found the novel to be therapeutic, and a psychiatrist and family therapist named Brad Robison has even written a study guide after using the book in his practice. It didn’t have this effect on us. 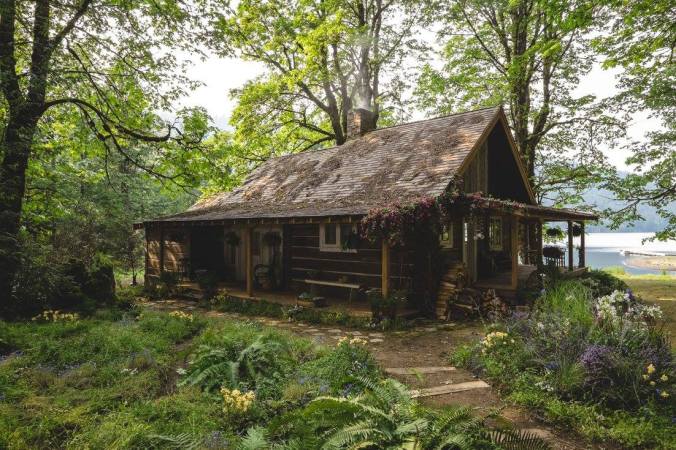 The use of a fantastical parable to address feelings of loss, bereavement and confusion is a fine starting point, and one that could have been the basis for a poetic, poignant film. Instead, The Shack is on-the-nose and clumsy. It’s different enough from the traditional idea of a ‘Christian movie’, but is content with peddling platitudes rather than provoking thought.

The city of London: between being decimated by a tungsten rod fired from orbit in G.I. Joe: Retaliation and having Dubai’s Burj Khalifa plonked down on it by aliens in the upcoming Independence Day: Resurgence, it seems Hollywood’s been saying “screw Britannia!” Another round of U.K. landmark destruction is preceded by the untimely death of the British Prime Minister. World leaders, including U.S. President Benjamin Asher (Eckhart), arrive for the state funeral. In the lead-up to the funeral, a brutal, intricately-planned terrorist attack cripples London, and Secret Service agent Mike Banning (Butler) is the only thing keeping Asher alive. Back in Washington D.C., Vice President Alan Trumbull (Freeman) receives a video message from terrorist mastermind Aamir Barkawi (Aboutboul), claiming responsibility for the attacks. Asher and Banning have to rendezvous with MI6 agent Jacquelin Marshal (Riley) as the chaos escalates and terrorists overrun London.

London Has Fallenis the sequel to Olympus Has Fallen, a film that was generally regarded as taking itself way too seriously, hilariously jingoistic, containing slipshod visual effects work but boasting a decent amount of brutal action. London Has Fallen contains all those traits and kicks them up to 11. There’s an increased sense of scale and the location shooting in London itself means the production values here are an improvement on those of its predecessor. However, in scenes including the destruction of Chelsea Bridge and a sequence in which the presidential helicopters Marines One, Two and Three are evading terrorists’ rockets, the visual effects work is nigh laughable.

The over-the-top bombast is supposed to be thrilling, but there will be many audiences who will have a difficult time deriving entertainment from seeing terrorists blow up a city, particularly given the tragic frequency with which such incidents occur in real life. Paris, Beirut, Tunis, Istanbul, San Bernadino and Jakarta amongst others were all recently attacked and furthermore, the trailer for London Has Fallen was released during the week of the tenth anniversary of the 2005 7/7 London bombings. We don’t mean to get all self-righteous and this reviewer is a big action movie junkie, but the way London Has Fallen presents itself as topical while revelling in dated action movie tropes, with a one-man army stabbing bad guys and dispensing one-liners, is a little uncomfortable. 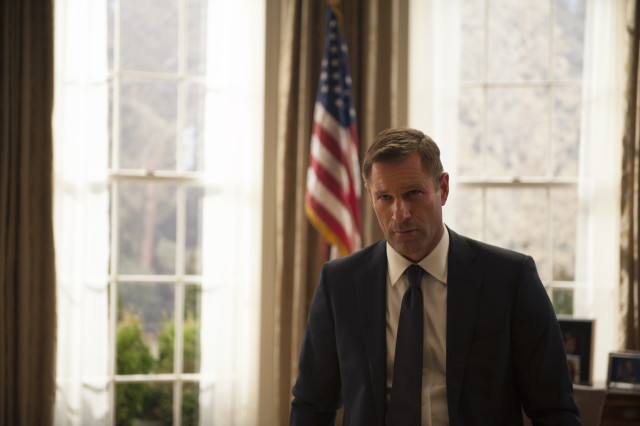 It’s pretty funny that this flag-waving, chest-thumping celebration of American jingoism is directed by a Swedish director of Iranian descent and stars an actor who is completely incapable of disguising his unmistakably Scottish brogue. As far as London Has Fallenis concerned, all world leaders are entirely expendable – ersatz versions of Angela Merkel, Silvio Berlusconi and François Hollande bite the dust in quick succession – all except for the American president, of course. The primary villain, a Middle-Eastern arms dealer, seems like a C-grade reject from the TV series Homeland. And yes, drone strikes are a plot point, because total predictability is the name of the game here. At the very least, the villainous scheme is an order of magnitude more plausible than that of the North Korean baddies in Olympus Has Fallen, though that’s still not saying much.

Butler and Eckhart lead a good number of actors who reprise their roles from Olympus Has Fallen. Sure, Butler is completely unbelievable as an American, but he and Eckhart develop a watchable buddy chemistry and Butler’s rough-around-the-edges quality makes him easier to buy as an old-school action hero than other actors out there. Many attempts at badass quips simply come off as silly, but the guy looks like he knows what he’s doing when he’s firing a gun. Bassett isn’t in much of the film and Freeman, Forster and Leo simply sit around the Situation Room back at the White House; their scenes looking like they were all filmed in one day. Jackie Earle Haley as the White House Deputy Chief of Staff is puzzling casting, since the actor isn’t allowed to display any of the quirky energy he’s known for. Riley’s MI6 agent could’ve been a scene stealing character, but God forbid anyone other than Butler kick a significant amount of ass.

Is London Has Fallen enjoyable at all? Yes. It’s fun to guffaw at the clunky lines of dialogue, to appreciate some of the action sequences for being well-executed and others for looking hilariously phony and to pretend that it’s still the 80s-90s, cheering on the clench-jawed hero who charges in guns a-blazing. The clichés are so on-the-nose – for example, Banning’s wife Leah (Mitchell) is pregnant with their first child, pining for the safe return of her husband – it’s impossible to assume the filmmakers didn’t go into this with at least the slightest modicum of self-awareness. Most of all, it’s enjoyable in its thunderous stupidity and those 99 minutes go by fairly quickly.

Summary: This action thriller is often breathtakingly dumb and the “terrorist attacks in the name of entertainment” angle is problematic in this day and age, but the sheer lack of subtlety is enjoyable in its own right. U.S.A! U.S.A! U.S.A!
RATING: 2.5out of 5 Stars
Jedd Jong