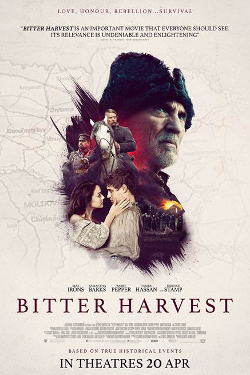 The Soviet famine of 1932-33, also known as the ‘Holodomor’, is an oft-overlooked historical atrocity. This romantic drama is set against this event, as Joseph Stalin (Oliver) seized farmers’ harvests and starved the Soviet Ukraine populace, as part of his collectivisation campaign. The starvation is accompanied by indiscriminate slaughter, with Stalin’s troops rounding up dissenters and throwing them into gulags, where they eventually face firing squads. Yuri (Irons), a young artist whose grandfather was a famous warrior, is separated from his childhood sweetheart Natalka (Barks) when he travels to Kiev to attend art school. Back home, Stalin’s men, led by Commissar Sergei (Hassan), are terrorising the farmers and their families. Caught in the violence and despair, Yuri must make his way home to be reunited with Natalka. 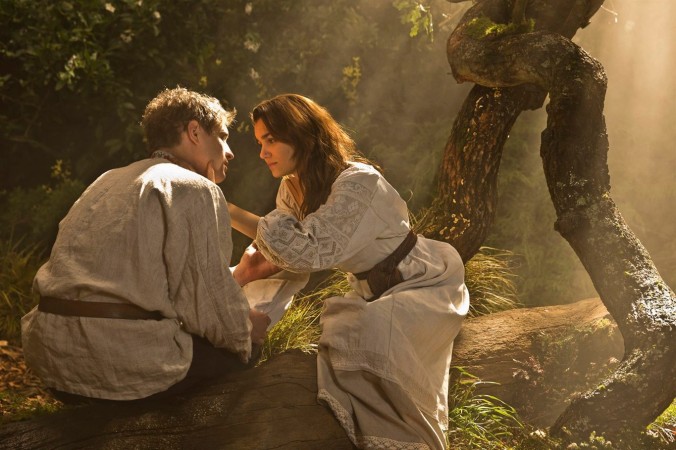 Bitter Harvest is directed by George Mendeluk, a Canadian filmmaker of Ukrainian descent. Mendeluk co-wrote the film with Ukrainian-Canadian screenwriter Richard Bachynsky, who decided to make a film on the subject when he visited Ukraine in 1999. This is a labour of love for both men, who feel a responsibility to shed light on this man-made famine which only became public knowledge after the fall of the Soviet Union in 1991. While Mendeluk and Bachynsky have noble intentions, Bitter Harvest falls short of being the impactful, revelatory and visceral experience it could’ve been.

This is a film that aspires to be a sweeping period romance, setting a fictional tale of young lovers rent apart by the horrors of war against an actual historical tragedy. The love story at the core of Bitter Harvest is rote and melodramatic. It is intended to be a way in for audiences, the vast majority of whom will be unfamiliar with the historical context, but instead, it serves to cheapen the actual suffering experienced by the Ukrainians. While it certainly wasn’t what Mendeluk intended and despite the horrifying actions of the Soviet troops that are depicted, Bitter Harvest is sometimes in danger of romanticising the Holodomor. The film busies itself with looking painterly above delving into its characters. Most filmgoers don’t want to sit through a history lesson, but the compelling story of the anti-Bolshevik resistance ends up playing second fiddle to a ho-hum love story.

Bitter Harvest benefits from location filming in Ukraine itself, as well as the talent and experience of veteran cinematographer Douglas Milsome. Benjamin Wallfisch’s score, with its lush, mournful strings, sounds just like what one would expect from a film in this genre. Despite its strong production values, various factors undercut Bitter Harvest’s authenticity. One such factor is that everyone’s speaking with clipped English accents. We understand that making the film in the English language broadens its reach, and that the U.K. cast might have sounded silly affecting Ukrainian accents, but this sonic incongruity is often distracting. It also invokes “Englishness = prestige”, the same reason why everyone in The Danish Girl sounded a little Masterpiece Theatre-esque.

Even more detrimental is the sheer cheesiness of the dialogue. “You shouldn’t love me. I will only bring you misfortune,” Natalka tells Yuri forlornly.

“Oh, I have been a fool for lesser things,” Yuri replies, as the audience rolls their eyes. 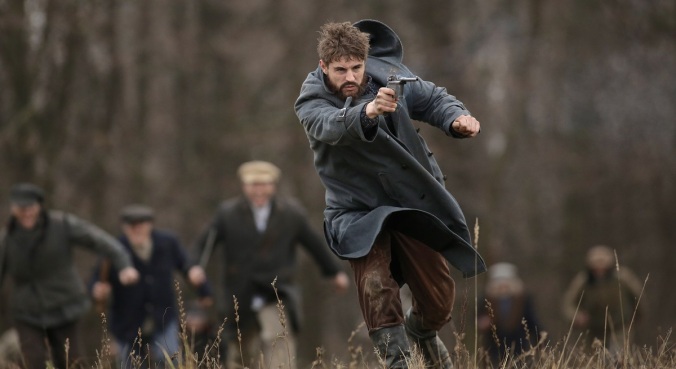 Irons, who will have “the son of Jeremy Irons” following any mention of his name for the foreseeable future, is a bland leading man. Yuri is a sympathetic character, a sensitive soul who is more at home painting than taking arms against enemy combatants. As played by Irons however, we never fully step into Yuri’s shoes, and it’s hard to feel a lot of him even as he endures significant hardship.

Barks, who finds herself associating with student revolutionaries again after playing Éponine in Les Misérables, occasionally gets to exhibit the blend of fighting spirit and fragility that served her so well in that film. Hassan’s Sergei is little more than a snarling villain, while Terence Stamp pops up in a dignified supporting role. Aneurin Barnard’s spirited resistance leader is entertaining to watch, but he has too little screen time.

The general critical consensus on Bitter Harvest is that while it will raise the awareness of the Holodomor, it doesn’t do the victims of the famine-genocide due justice. It aspires to the soaring, searing wartime romances of yore, but its cheesiness and complete lack of subtlety work against it at every turn.

Summary: Bitter Harvest shines a light on a dark, little-known chapter of history, but its hokey romance and heavy-handed treatment of historical events let it down, despite the filmmakers’ admirable intentions.